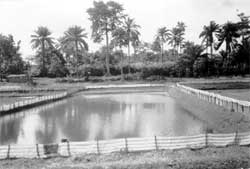 in the sub-Saharan African nation of Nigeria, the phenomenon of garbage-fed fishes is one of recent occurrence. Prior to this, almost all that the fishes consumed were products of nature's bountifulness, from the deep seas, natural ponds and countless streams, and rivers that criss-cross the nation. Nobody really deemed it fit to either feed the fish or re-stock the waters.

But the emergence of Mohammadu Buhari's regime in the early '80s, which preached self-reliance and food sufficiency made several farmers look inwards and explore other techniques to enhance the production of dairy, fish and other agricultural products. The result was a rapid development of homestead and commercial fish ponds, which were dependent on the wastes from breweries, poultry, and rice-mills. The soaring cost of imported fish products, given the devaluation of the local currency and the seeming extinction of the natural stock, facilitated the revolution.

One notable garbage-induced fish pond in Nigeria is the Oluana Fish Centre (ofc) which is situated in the northern tip of Ibadan, the largest city in West Africa and the capital of Oyo state. Established and managed by Hilary Sydenham, a Briton, the six-year-old fish pond occupies more than four ha of land and shares its boundary with the International Institute of Tropical Agri culture, a 28-year-old international agency involved in improving food sufficiency, especially in tropical Africa. ofc, an investment worth about us $94,000, annually breeds more than 80,000 tonnes (t) of fish and accounts for almost 80 per cent of fresh fish supplies into the markets in Oyo state alone.

The garbage-feeding revolution in the country came into being about 12 years ago, but did not become widespread until three years ago . Today, there is a marked increase in the number of entrants into the business. Although small in comparison with other countries, there are more fish farmers in Nigeria today than there were in the '70s and early '80s. Correspondingly, the scale of fish breeding remains low in the country as many fish farmers prefer going into the homestead scheme instead of breaking into full commercialisation.

With many farmers now fully embracing garbage as a resource for breeding fish, people are gradually changing their attitude towards garbage, hitherto discarded as waste. In fact, brewery waste, chicken and pig droplets and rice husks, to name a few, are increasingly being sourced now as useful fishfeed. Interestingly, such materials, which earlier were a major problem in terms of disposal, now sport price tags! For instance, brewery waste, which serves as feed for both fish and pigs, costs anywhere between 12-18 us dollars.
Garbage as feed is given to fish in a number of ways. While some farmers prefer the dried brewery wastes, others use wet wastes which produce maggots rich in protein and similar substances capable of attracting fish. Care is also taken to adopt the best technique in feeding fish.

A particularly cautious approach is usually adopted by farmers before stocking the product in the pond. The water is treated with certain powerful chemicals to get rid of objects inimical to the existence of the fish. Partial cropping is also necessary every now and then to remove faster growing stock to avoid predatory activities.

On the whole, both the local stock and the species adapted from foreign countries have been found to thrive quite excellently, feeding on garbage.

Certain factors account for the demand of fish in Nigeria. These include dietary, ceremonial needs, medicinal and economic values. As more Nigerians abandon beef in preference to fish, believing that it contains less cholesterol and comes in a more nutritious and cheaper form, the demand for fish to serve dietary purposes, has increased. This explains why Nigerians have continued to improve on their culinary style in preparing fish meals. While the seafood can be served smoked, fried or cooked, it can equally be blended with varying local delicacies to achieve the natural taste of home cooking.

With the new trend of garbage-fed fishes leading to the springing up of more fish ponds, farmers now demand fish to stock their ponds. Catfish and tilapia being air-breathing species, require, in combination with garbage feeds, running water to improve the oxygen level of the pond for greater survival and enhanced productivity.

Apart from being less expensive than the formulated fish feeds, one major advantage garbage has is that currently there is more than enough to go around. Tayo Adesina, who runs a homestead fish pond, states that feeding fish on garbage is advantageous to the Nigerian society, not only by helping to turn waste into nutritious value and increasing the profit margin accruable to the breeder, but also in conserving scarce foreign exchange.


Some, however, fear that as more ponds, which depend solely on garbage emerge, the demand for waste material would shoot up and thus seriously affect its availability. This made Sydenham suggest that an enterprise should be set up to explore the whole idea of garbage feed, improve upon it through technological support and, more importantly, commercialise the venture to ensure that the material does not become scarce in the future. In order to avoid scarcity and to enhance the profit level, some farmers have already embarked on mixed-farming, wherein fish breeding takes place along with chicken and pig rearing.

Even at this nascent stage, fish-farming is big business in Nigeria. In fact, with good management, statistics available with the University of Ibadan have shown that breeding fish on garbage has recorded about 90 per cent success in Nigeria. Most farmers enjoy a wide profit margin.

If fed properly some species, particularly the tilapia, is capable of producing a sizeable stock in a year. The junk feed also ensures their rapid growth rate, enabling them to reach an optimum size in less than six months. With an initial investment of six t of stock in one hectare of fish pond, a farmer can be sure of harvesting between 20-30 t by the year end. With sound management, the yields have prospects of increasing as the years progress. For example, in ofc, a fish used for producing fingerlings has singularly generated over us $470 in the last three years. Similarly, some species of stock purchased at a mere 22 cents for grooming could sell for as much as us $5.50 after a few months of constant feeding.

"With good planning, painstaking execution and proper management, a farmer should be able to make thrice his investment cost within a year," Sydenham declares. To set up a hectare of fish pond in Nigeria, would involve about us $9,400, according to Sydenham. The amount covers the cost of purchasing fish species, stocking the ponds, construction of the pond, feeding the stock, transportation, purchase of certain other relevant equipment like water pump and hiring few workers who will work on the pond on a daily basis. A break-up of the estimate shows that about four cents are required to stock one square metre of pond which is usually home to about four fishes, with six t of fishes needed for a hectare of pond. While fishes are purchased on an average of 22 cents per kg for stocking, imported ones are usually more expensive.

The venture, still fledgling in Nigeria, has a lot of constraints too. Apart from lack of modern equipment needed to channel water into the pond, factors like the availability of vehicles to transport the product from one place to another, is vital. Extra effort is also needed to acquire efficient workers who have the basic knowledge on how to manage such a farm.

Another major threat is poaching. Most Nigerians, especially those in the rural areas, are yet to come to terms with the reality that fish can be privately bred. They still hold on tenaciously to the tradition that the fish available is for public consumption, belonging exclusively to nobody. This usually makes such people indulge in poaching wherever they see fish ponds. Most fish farmers have, over the years, tried to check this development by erecting high-rise fences or employing both night and day guards to police the place. But then, how many farmers in Nigeria can afford these? Obviously, only a few.

Fish farmers have to also contend with the vagaries of the climate. Since Nigeria, in the heart of tropical Africa, is characterised by its high density of rainfall, natural disasters like flooding become a major problem for farmers. If the stocks are poorly cared for, most fingerlings would die, and even the whole stock could get wiped out.

The land use decree existing in Nigeria, which gives the government the right to ownership of all lands, is another constraining variable. Instances abound where farmers are coerced to relinquish certain fertile lands by the government for its use. But notwithstanding all this, fish from junk is still booming.