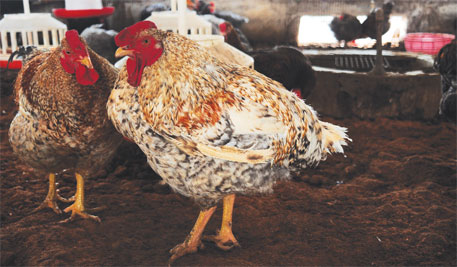 In the industrial hub of Khandsa in Haryana’s Gurgaon district, a sprawling campus surrounded by trees houses several poultry units. Among them, a small unit arrests one’s sight. It breeds Kuroilers, multi-coloured birds like the country hen, only that they grow bigger, lay more eggs, and provide livelihood to one million rural households in the country. The campus belongs to Keggfarms, a private firm that used parent and grandparent stocks from the US and pure bloodlines to create Kuroiler in the 1970s.

A Kuroiler lives on a diet of kitchen and agricultural waste. Kuroiler hens can deliver around 150 eggs per year, while native hens deliver 40. A Kuroiler chicken meat yield per bird is also more—a male bird weighs about 3.5 kg and female about 2.5 kg. The native male bird weighs 1 kg, while female 0.9 kg. Due to its unique genetic features, Kuroiler is resistant to diseases.

Introduced in the early 1990s, Kuroiler has become popular in rural areas of Uttar Pradesh, Jharkhand, West Bengal, Mizoram, Chhattisgarh, Meghalaya and Uttarakhand. Large number of small, landless and marginal farmers breed these birds as a full-time or part-time business. After her husband’s death, Tarabela Ghosh of West Bengal was struggling to feed her three sons. She used to sell parboiled rice but the income was not enough. In 2007, she decided to start Kuroiler farming. She now earns over Rs 2,000 monthly in addition to what she earns from her rice business. “I feed the Kuroilers the leftovers from the rice that I sell. This reduces my input cost,” says Ghosh.

Kuroiler is the only bird which has been tested in India across a number of agro-climatic zones, says M K Biswas, general manager of sales, Keggfarms. “We have supplied over 250 million Kuroiler chicks in 13 states and generated around Rs 450 million as additional livelihood especially for women,” he adds.

The USP Reinventing the basket-bicycle delivery network of supplying chicks, Keggfarms has over 1,500 mother units, 400 dealers and 1,500 village vendors.

The company supplies newborn chicks to mother units at around Rs 10 per chick. These units breed the chicks for 15 days and ensure that they gain around 300 grams each. They incur an expense of Rs 7 per chick.

After a gap of 15 to 20 days, the units sell the birds to vendors at a cost of Rs 17 per chick. The vendors then sell them to rural households at varied prices. A unit earns between Rs 3,800 and Rs 5,300 per month, while a vendor makes between Rs 1,100 to Rs 9,300 per month. For rural households, there is a choice whether they want to sell Kuroiler eggs or meat. People generally keep a stock of five to 20 live birds.

The reason newborn chicks are not supplied directly to farmers is because mortality rate of poultry chicks in the country is very high. “The concept of mother unit was established because we wanted to minimise early chick mortality and provide modicum of immunisation so that the poultry farmer does not incur any loss,” says Biswas. People working at the unit are trained for initial nursing of Kuroiler chicks. “Our focus is on unemployed, agricultural labourers or construction workers,” he adds.

Kuroiler’s successful model of farming has also been recognised at the global level. UN’s Food and Agriculture Organization in its The State of Food and Agriculture 2009 report states: “On an average, households raising Kuroilers generated five times as much from their poultry enterprises as did households that kept non-Kuroiler poultry.” Keggfarms has also become a case study at the London School of Economics and Harvard Business School.

The model was also adopted as an experiment by the government of Uganda. During the field experiment in 2010-11, the Arizona State University observed that the bird yielded 133 per cent more meat, 462 per cent more eggs and 341 per cent increase in income over local chickens.