Fish and a philosophy

A cooperative in Kolkata shows the way for urban sewage management

Fish and a philosophy 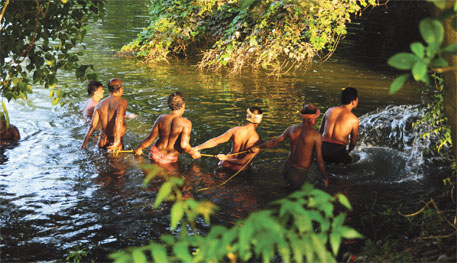 Nearly two decades ago, a group of fishers did the unthinkable inside the Calcutta High Court. During the hearing of a case, in which they were the petitioners, they offered hot fried fish to judges and lawyers present in the courtroom—not to influence the judgement but to protect the dignity of their catch at stake.

The fishers’ cooperative, leaseholder of a wetland, had appealed against an eviction notice issued by its owner, Calcutta Port Trust. After all, they had toiled for 30 years to convert the port’s abandoned dumping ground into a fishery and a sprawling patch of green.

The port trust wanted the land back, arguing that the quality of fish farmed in the industrial and domestic sewage water is suspicious. Armed with fried fish and a report from the National Environmental Engineering Research Institute (NEERI), certifying that the fish is safe for consumption, the fishers obtained a stay order against eviction. But the threat persists.

Last year the port served the cooperative another notice to pay Rs 77 crore as lease rent. The fishers cannot afford the amount and are unsure if the results of their hard work, that began half a century ago, will stay with them.

Around 1942, their families migrated from Howrah district after the Damodar river, where they would fish, lost navigability. Then the waterlogged lowland on the south-western edge was owned and used by Calcutta Port Trust to dump garbage. In search of traditional livelihood, they formed the Mudiali Fishermen Cooperative Society (MFCS) in 1961 and leased 250 hectares (ha) from the trust. The money for bidding came from the corpus created by the founder members by saving 25 paisa a day; the shortfall was met by pawning family jewellery.

“The area lay abandoned and was frequented by hardened criminals,” says Samir Rang, a society member. “There was a dump site for animal carcasses and people did not dare to pass by even in daytime. The land was unusable for the port authorities and, therefore, they readily agreed on the lease.”

What followed in the next 50 years is worth the several doctoral theses written on the success of MFCS. The leased wetland, which now spreads over 82.5 ha, boasts of fishing worth Rs 60 lakh per annum. Over the years members have diversified into commercial goat and duck rearing, fish breeding, horticulture, manufacturing paddle boats, managing a boating complex and renting out picnic spots—earning an additional Rs 50 lakh a year.

The cooperative has planted over 100,000 trees—a careful mix of nitrogen-fixing plants like sababul (Leucaena leucocephala) for fish feed; dust- and chemical-absorbing plants like neem and akand (Asclepias calotropis); and fruit-bearing trees. 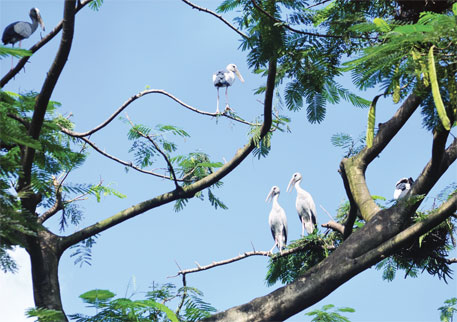 It is a world apart from the densely congested metropolis. Asian openbills, green pigeons and migratory cranes now throng the wetland, which the cooperative has renamed as Mudiali Nature Park. The biodiversity count is impressive: 31 varieties of fish, 84 types of butterflies, 127 plant species and 141 kinds of birds. As many as 27 varieties of migratory birds have been recorded in the nature park in recent years. It is also a perfect gateaway for lovers in search of quiet. On an average 600 people visit the park every day, paying an entry fee of Rs 10.

Beyond this beauty and wealth of biodiversity, the nature park provides the crucial environmental service of treating industrial and domestic sewage.

Every day the wetland receives nearly 25 million litres of wastewater—70 per cent of this is industrial and 30 per cent domestic. The treatment process is simple. Sewage is channelled through six ponds in a step by step process. In the first stabilisation pond, wastewater is treated by sprinkling quicklime over it. In rest of the ponds, water hyacinth absorbs the oil and grease. Connecting tunnels between the ponds are populated with exotic fish like tilapia, nycotica that can endure toxic stress, and air-breathing varieties like singi, magur and koi. These are indicator fishes as they give early signal if the water is contaminated with deadly chemicals. When the fish jump out of the water to breathe too often, the fisher comes to know that the dissolved oxygen in the water is low. At each pond the water gets cleaned by siltation and adsorption, following which it is channeled into the fishing ponds.

The effluent is tested at regular intervals at the in-house laboratory for the presence of any deadly chemicals before it is drained into fishing ponds. The 1990 NEERI report testifies that “the climatic condition of the area facilitates conversion of organic waste into protein-rich micro algae for raising a fine catch of fish without much supplementary feeding… reducing the cost of aquaculture.” The treated wastewater then flows into a canal joining the Hoogly.

“Compare this to the Rs 200 crore sewage treatment plant under the Ganga Action Plan that treats 40 million litres of sewage a day,” says Ashok Patra, chairperson of MFCS.

In 2010, the West Bengal Pollution Control Board tracked the water quality of inlet ponds and surrounding factories for 18 months and concluded that the aquaculture contains negligible amount of dissolved pollutants, probably owing to the efficient recycling system. Heavy metals in ponds and fish gills were also within the permissible range. According to Dhrubajyoti Ghosh, former chief environment officer of West Bengal and an expert on wetland ecology, “the nature park is a tutorial ecosystem for the rest of the world, especially low-lying cities in tropical regions like Dhaka, Mumbai, Jakarta and Bangkok.”

MFCS has won the national productivity award for a record five times for its fish production. The members do not chase away birds which feed on the fish. “A cormorant, for instance, feeds on 200 grams of fish a day,” says Rang. “But its droppings are valuable fish feed.” This is an important lesson in conservation because at the East Kolkata Wetlands, the lone Ramsar site in the state, commercial fisheries often poison fish-eating birds.

While much of the credit for this novel way of managing fishery goes to the 300 fisher families, it could not have been possible without a young Mukut Roychowdhury. In 1985, Roychowdhury joined the cooperative as chief executive officer and government nominee from the fisheries department. He sent members to learn pisciculture at the state agricultural university, started scientific de-silting of ponds while focusing on creating a better ecosystem by increasing the biodiversity count. Much of the diversification from fisheries to social forestry and eco-tourism happened under his guidance. He also made sure that the members work actively and regularly, else their membership is terminated. Even to this day, everyone from the chairperson and director to the members get down with fishing nets and perform all activities in rotation.

MFCS bears schooling costs for members’ children, besides running a coaching centre, a fair price shop, a medical clinic and providing financial aid for marriage and funeral expenses. “The cooperative thriving on the city’s refuse has pulled out the dirt poor migrant families from grinding poverty,” says Chandrasekhar Bhattacharya, a Kolkata -based journalist who confesses to his obsession with the nature park.

Over the years, the port authorities have reduced the area under MFCS, selling it to various industries. If the 82.5 ha patch is taken away, not only will the fishers lose their livelihood, the 14 million-plus city will lose a biodiversity hot spot that processes wastewater for free.