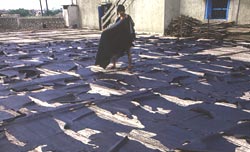 India's 2,500 tanneries churn out 1.8 billion square feet of leather every year. They earn the country US $6 billion annually as foreign exchange. They also discharge about 24 million cubic metres of wastewater with high COD, BOD and TDS concentrations, and about 0.4 million tonnes of hazardous solid wastes per annum (Environmental Management in Selected Industrial Sectors, CPCB and MEF, 2003).

This contamination overload is the outcome of the highly polluting chrome tanning manufacturing process, used by about 80 per cent of Indian tanneries. Technologies that curtail pollution in this sector are almost exclusively targetted towards large-scale tanneries. The small- and medium-scale plants, which dominate the industry, have few options. They either pollute blatantly or resort to temporary solutions.

There is also a problem of non-compliance and resistance to change. Though India's pollution control regulations for the industry are tame compared to global standards, most tanneries choose to ignore them. Chrome recovery technologies developed by the Chennai-based Central Leather Research Institute (CLRI) have been summarily rejected by the industry as commercially unviable. The CLRI, however, claims the cost of its chrome recovery unit is between Rs 3.5-10.0 lakh (based on size), with a payback period of just two-three years.

Although substantial scope exists for recycling process water in tanneries, the industry gives this vital area of operation the slip. Neither has it taken to biomethanation for treatment of tannery fleshing and sludge, being implemented at a few sites.

Why are Indian tanneries such rigid non-conformists? To all appearances, they do not have a valid ground for not meeting standards or rejecting new technologies. Making pollution control technologies work for medium and small industry is still a distant challenge.

Distilleries pollute. In India, they pollute with total impunity. An unholy nexus of politicians, bureaucrats, regulators and industry, this sector is foremost in not complying with pollution norms. The minimum national standards (MINAS) for the sector were set way back in 1981-82, but more than two decades after, not a single distillery unit meets the BOD and COD standards prescribed under MINAS (see box above: Awash!).

Treatment procedures of spent wash, generated as effluent by the industry, have varied over the years, without contributing to any substantial reduction in pollution. The first of these -- the lagooning process, or storage of spent wash in ponds -- led to severe groundwater contamination. Some distilleries have resorted to composting, with the final compost being used as fertiliser in agricultural fields. However, it is now universally known that using distillery compost leads to a significant increase in soil salinity.

The good news is that the distillery industry is well suited for agriculture-dependent economies such as India. By using renewable wastes from agriculture, it adds high value to otherwise low-value products. And the ethanol produced in distilleries, when blended with petrol, acts as a comparatively less polluting automobile fuel. Eight states in India are already using petrol with a 5 per cent ethanol content and there is a potential to increase this to 10 per cent.

But the sector certainly needs to clean up its act. In cooperation with the government, it needs to concentrate on investments in indigenous research and development to find a permanent solution for treating spent wash. Institutions such as the National Sugar Institute, Kanpur and the New Delhi-based Indian Agricultural Research Institute, despite being adequately funded by the government, have not done any significant work for treatment and disposal of this highly acidic and odorous effluent.

The West has the technology for treating spent wash from grain-based distilleries. Unfortunately, this cannot be used in India, as almost all Indian distilleries use molasses (wastes from sugar industry) as their raw material.