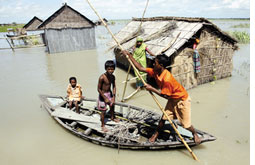 A food crisis looms large in Bangladesh after two waves of floods and a cyclone. Three natural disasters within four months have ruined the late-monsoon aman paddy, the second major cereal crop in the country. As a result, food prices have soared and the government is finding it difficult to procure rice.

Bangladesh is facing a shortage of at least 3 million tonnes of rice, according to an assessment by the non-government think tank Centre for Policy Dialogue and Bangladesh's largest ngo, Brac. "We usually have a rice shortage of 1-1.5 million tonnes a year, but because of recurrent natural disasters there will be an additional shortage of 1.9 million tonnes," Mahbub Hossain, the executive director of Brac, told reporters.

This time of the year, the government buys aman rice from farmers to build food grain stocks, but this year it isn't finding many sellers because prices have risen sharply. It wanted to buy at least 200,000 tonnes of rice, but farmers are reluctant to sell because they are getting better prices in the open market. The government has offered 20 taka (us $0.29) a kg for rice and 13 taka ($0.19) a kg for paddy, whereas the market prices are 32-35 taka ($0.51) and 18-20 taka ($0.29). Even importing rice won't be easy because food grain prices are high in the global market as well. 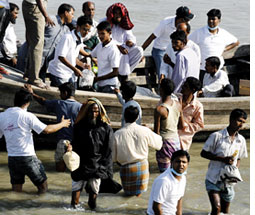 The food and disaster management ministry estimates the food deficit for this fiscal to be 2.96 million tonnes. Of this, rice deficit is 1.4 million tonnes and wheat 1.56 million tonnes. Demand for rice is pegged at 28.5 million tonnes. Agriculture department officials are tight-lipped because news of production shortfalls and shortage of stocks have caused a speculative price hike.

To soften the blow, the government has introduced its open market sale of coarse rice at subsidized rates from January 9. The idea is that by subsidizing coarse rice the government can bring down demand for fine rice, thus easing pressure on its price. But fine rice prices are creeping up despite the move, reports irin, the humanitarian news and analysis service of the un Office for the Coordination of Humanitarian Affairs.

The year 2007 had begun on a bleak note with boro crops, grown between November and May, damaged over 53,000 hectares (ha) in single-crop areas of Netrakona, Brahmanbaria and Kishoreganj districts. Farmers did not get even 10 per cent of the normal yield. Then came two waves of floods in August and September. In the first wave, the monsoon-swollen Brahmaputra and the Meghna inundated nearly two-thirds of the country, damaging crops on over 607,000 ha. When floodwater receded, farmers began transplanting aman paddy seedlings again. Soon the second wave of flood brought their work to naught and inundated 809,400 ha. The damage the second flood caused to agriculture was beyond recovery, for the deadline for planting aman paddy was over by then.

When farmers started growing vegetables and rabi crops such as pulses, onion, garlic, gram and oil seeds after the end of the second deluge, cyclone Sidr struck in November, damaging aman paddy in coastal districts--less affected by floods--just before harvest. Sources in the agriculture department say the two floods caused a loss of 600,000 tonnes of rice, while the cyclone caused a loss of another 800,000 tonnes.

Again it is time for sowing boro crops and the government does not want to take any chances. To overcome losses this time, the government is prescribing hybrid rice on 1 million ha of the targeted 4.38 million ha for boro rice. Hybrid rice is expected to give an additional tonne of yield per hectare compared to the high-yielding variety that gives 3. 67 tonnes a hectare, says Anil Sarkar, deputy director, department of agricultural extension.