To clear the persistent ambiguity governing the concept of sustainable development of urban centres, attention must be paid to present and future human needs 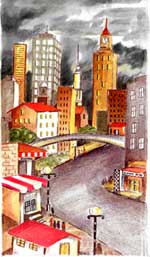 while the terms 'sustainable cities' and 'sustainable human settlements' were much in use at the recently concluded Habitat ii conference in Istanbul, with almost everyone apparently supporting the idea behind them, this unanimity was at best an illusion, as different groups gave different meanings to the terms. The ambiguity as to what 'sustainable cities' means allowed international agencies to claim that they were the leaders in promoting sustainable cities, when in reality they have contributed much to the growth of cities where sustainable development goals are not met. Governments in the world's wealthiest nations also supported the notion without admitting that it was in their cities that the largest reductions in resource use and waste generation are needed.
To many, especially environmentalists from Europe and North America, 'sustainable cities' means sustaining the biosphere. Their interest lies in reducing the ecological impact of cities, but in their discussions of how to do so, there is little or no mention of meeting urban human needs in a better manner. They have no interest in the 600 million urban dwellers in the Third World who live in housing that is so overcrowded and deprived of basic services that their lives and health are constantly at risk.

They assume that cities are responsible for most resource use and waste, pollution and greenhouse gas (ghg) generation, when it is not cities but particular commercial and industrial enterprises (or corporations) and middle- and upper-income groups sporting high-consumption lifestyles which are at fault. Most such enterprises and consumers may be concentrated in cities, but a considerable, and probably growing, proportion is not. In the North and the wealthier regions of the South, it is also the middle- and upper-income households living in rural areas or small towns that have the most unsustainable levels of resource consumption. Besides, in many cities in Africa, Asia and Latin America, the overall levels of resource use, waste generation and environmental degradation are very low compared to levels in the North. The issue here is not 'sustainable cities' but 'sustainable patterns of production and consumption'. Even among those proponents of 'sustainable cities' who are interested in meeting human needs, there is little agreement over what is to be sustained -- livelihoods, development projects, policies, institutions, businesses, the city, culture or economic growth. Many aid agencies think that sustainable development is achieved when their projects continue to operate or when their external support is withdrawn following the completion of their projects. In this instance, 'sustainable development' may have no explicit environmental concerns at all. The concept of 'social sustainability' was also raised in Istanbul, but it was unclear whether this was about social preconditions for sustainable development or the need to sustain specific social relations, customs or structures. Moreover, the term seems inappropriate if sustainable development is about meeting human needs and reducing the use of environmental capital, since this requires major changes to social structures.

A consideration of 'sustainable cities' necessarily has to take into account why so many people's needs are not being met today. This means considering the underlying economic, social and political causes of poverty or social exclusion. Besides assuming that plans for sustainable cities can be implemented within existing social and political structures, most of the literature on sustainable cities does not question the current distribution of power and the ownership of resources except where these are considered a factor in 'ecologically unsustainable practices'.


Virtually all international aid agencies and development banks claim to support sustainable development, but most give a low priority to meeting sustainable development goals in cities. Some support no urban projects at all. Amongst those that do, most give almost no importance to meeting human needs. International agencies that support urban projects are faced in most countries with the problem of weak and ineffective municipal authorities.

In such a scenario, the new conventional wisdom propounded at Habitat ii, embraced even by the World Bank, was to support 'community action'. However, these international agencies are structurally incapable of doing so. They have structures that were set up to support large capital projects implemented by recipient governments. The procedures by which projects are developed and funded do not allow them to support small, inexpensive community-developed projects. They can support a multi-million dollar water supply scheme, but not one involving us $2,000 for a water tank and distribution pipes in a settlement. Most aid agencies have devloped some ways to finance a few of these small projects through ngos or through special small project funds. But the bulk of their funding cannot be used in this manner.

Aid agencies have also given a low priority to encouraging more resource-efficient patterns of urban development. For instance, most agencies have never supported public transport. The exceptions are the bilateral agencies that fund large, expensive and often inappropriate metro schemes built by contractors from their own countries, where the motive was not sustainable cities but sustaining exports from the donor nation.


A concentration on 'sustainable cities' focusses too much attention on achieving ecological sustainability within increasingly isolated 'eco-regions' or 'bio-regions': each city has to meet the resource needs of its population and enterprises from its immediate environs. But the goals of sustainable development lie in meeting human needs within all cities, accompanied by a level of resource use and waste generation within each region, nation and the planet that is ecologically sustainable. It is unrealistic to demand that major cities should only be supported by resources produced in their immediate vicinities. However, it is entirely appropriate to require that high consumption-high waste consumers and producers in cities greatly reduce their levels of resource use and waste. The damaging ecological impacts of their demands for fresh water and other resources on their surrounds must also be reduced and ultimately halted. We need frameworks to ensure the achieve ment of sustainable development goals worldwide, including appropriate frameworks for cities (which obviously will have multiple goals). They must include goals to ensure that all human needs are addressed and the different kinds of environmental capital are conserved.

• The non-renewable natural sink capacity or the finite capacity of eco-systems to absorb or dilute non-biodegradable wastes without adverse effects: One area of concern is the increasing concentration of pesticides. There are also large volumes of harmful non-biodegradable wastes (wastes from the nuclear power industry, for instance) that have to be stored and kept entirely isolated from eco-systems. One of the most pressing problems is the finite capacity of global systems to absorb ghg without changes in climate that can affect health and ecosystems.

• The finite capacity of ecosystems to provide sustainable levels of renewable resources: Human use of some renewable resources (solar, wind or wave energy) does not deplete the resource. But many renewable resources (especially pastures, crops and trees) are renewable only within finite limits set by the ecosystems within which they grow. Fresh water resources are also finite; in the case of aquifers, human use often exceeds their natural rate of recharge and such levels of use are unsustainable. Many cities have depleted their local ground-water resources and now have to draw water from increasingly distant water-sheds, often with ecologically damaging impacts.


Many of the goals shown in Figure 1 for meeting needs are already among the responsibilities of city governments. This does not imply that municipal authorities should provide all the basic services. As was stressed at Habitat ii, many of the most innovative and cost-effective basic service programmes in cities are run by community organisations and ngos. City authorities, on their parts, must act as supervisors and supporters of private or community provision and ensure universal coverage. To develop their concern for the 'sustainable' component of sustainable development, city authorities should focus on two new aspects: firstly, a concern for the environmental impact of city-based production and consumption on the needs of all people (not just those within their jurisdiction); and secondly, an understanding of the finite nature of many natural resources and ecosystems, and of the capacities of ecosystems in wider regional, national and international contexts to absorb or break down wastes. Historically, these have not been considered within the remit of city authorities. Indeed, many Northern megapolises have made progress in achieving sustainable development goals within their own boundaries by drawing on the environmental capital of other regions and on the waste-absorption capacity of 'global commons'.

Adding a concern for 'ecological sustainability' onto existing development concerns means setting limits on the rights of city enterprises or consumers to use scarce resources and to generate non-biodegradable wastes. This has many implications. Perhaps the most important for cities in the North and the wealthier countries in the South is the role of city and municipal authorities in promoting the needed delinking of high standards of living from high levels of resource use and waste generation.


There is an assumption in most literature on sustainable development and on sustainable cities that poverty is a major cause of environmental degradation. But low-income groups contribute very little to the depletion of most of the environmental capital discussed above. Their consumption levels for non-renewable resources is very low, given the fact that they lack the income to own resource-intensive capital goods like automobiles.

The levels of waste they generate per person are much lower than those generated by richer groups. Also, low-income households often re-use or recycle much of what wealthier households would have thrown away. Their contribution per person to ghg and to stratospheric ozone depleting chemicals is very low in comparison to wealthier groups. The only components of natural capital to whose depletion low-income groups may contribute are certain renewable resources like soil, forests or fresh water. However, low-income groups living in urban areas contribute little or nothing to this.

Dwelling in rural areas, the poorer farmers, pastoralists and forest-users have often been targeted as the principal perpetrators of unsustainable resource use. But this assumption is of doubtful verity, as the poverty of this section of the poor is a result of them having so little land and such inadequate access to forests. Most deforestation and soil erosion takes place on land which the poor do not own and to which they have no access; wealthy farmers, landowners, commercial companies and governments own most of the world's farmlands and forests.

There is certainly a link between poverty and serious problems of environmental health in urban areas as low-income groups lack safe and sufficient water supplies, provision for sanitation, safe and adequate housing and access to health care. But the environment-related diseases and injuries that low-income households suffer from are not depleting soils or forests; they are not using up non-renewable resources; they are not seriously disrupting ecosystems. Perhaps this is why they are so often forgotten by those preaching the concepts of 'sustainable development' or 'sustainable cities'.

David Satterthwaite is director of the Human Settlements Programme at the International Institute for Environment and Development, London. He is also the principal author of the official un report for the Habitat ii conference.