Controlled burning of woodlands can be an effective tool for enriching the land and ecology. Dipanjan Ghosh looks at the possibilities 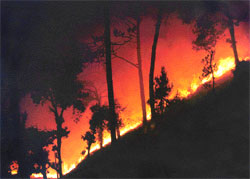 Between July 1997 and November 1997, forest fires on islands in Indonesia created smoke that spread over seven nations and was responsible for a plane crash in Sumatra and an oil vessel collision in the strait of Malacca due to low visibility.

If there is a forest, there will be a fire, spread either by humans or lightening, or summer. So far, efforts were always made to prevent and control a fire. This defensive approach has given way to fires being used as a tool for forest management. Because fire also benefits.
The science of ecopyrology that deals with starting forest fires, asserts that eliminating fire from ecosystems is like shutting out the wind or the rain. Moreover, fire suppression alters ecosystems. Open habitats favoured by wildlife get rarer, and there is a risk of losing the vegetation mosaic and the biodiversity it sustains. Ecopyrology propagates the use of fire in land management and controlled burning as a forest management measure. Fires are actually planned and many forests are born of fire (see box: Bushland born of blaze).

In India too, especially in the northeast and central parts of the country, since hundreds of years ago, vast tracts of land are cleared and deliberately set on fire, to revive the soil for agriculture. Called shifting cultivation or the "slash and burn" method of farming, it affords poor people the cheapest means to clear the forest and provide ash, a free fertiliser.

Sometimes, a forest may be set on fire to improve the quality of pasture lands, to facilitate the collection of various forest products like flowers, tender leaves, honey, lichens and seeds, to search for wild animals or even scare them away from fields and villages.
Scientists found that through centuries of frequent fires, certain plant species had adapted to cope with and even benefit from wildfire. For instance, many plants now inhabit areas where fire means survival, not destruction. Fires can kick-start regeneration by providing ideal growing conditions. Planned fires can be used to remove litter and shape the landscape.

A fire creates openings in the forest, blocked by litter accumulation that can physically prevent healthy production and growth of plant species on grasslands. Fires convert these organic debris, which are the mineral-storing plant parts, like the stems, leaves and bark, to ash. In this form, nutrients, like calcium, magnesium, potassium and phosphorous, are dissolved by natural elements like rain and returned to the soil, thereby recycled for use. Fire thus leads to a spurt in the growth of plants.

Fires can be used to make an area suitable for growth of grasses, improve the quality of forage besides being used to stimulate flowering and seed production in certain legumes and grasses. Flowering plants successfully establish themselves on burned areas, flourishing in full sunlight.

Even animals stand to benefit from a managed fire. Herbivores prefer post burn plants. Livestock grazing on burnt grasslands are found to gain in weight more rapidly than those grazing on unburnt grasslands. After a fire, woodpecker populations may increase fifty times! They come to feast on bark beetles and other insects that colonise the newly burned trees.

Many birds and small mammals depend on the seeds, found after a fire. These are the seeds that did not sprout when they fell on a shaded or crowded forest floor. Fire helps some seeds to germinate. For instance, the seeds of Ceanothus, an important food plant for deer and elk, can remain stored in the forest duff for decades. These seeds tend to germinate when fire conditions the seed coat and changes the duff to ash.

Certain grasses like Aristida stricta, Paspalum notatum and some shrubs like Aractostaphylos produce a large number of seeds with hard seed coats, which require a high temperature, about 70-80 degrees celsius, for germination. Even in grasses and legumes like Andropogon, Heteropogon, Rheus, Stipa, Tephrosia and Themeda, the seeds germinate only after getting fire treatments. Fire also helps to disseminate seeds from mature cones. Pine trees have cones that open when mature. However, on some pines, the majority of cones remain closed. They open and release seeds only when they are heated.

Fire does not harm the seeds especially in fire-prone forests, where some plants have developed adaptive features. For instance, Ponderosa pine trees have a thick bark that insulates the inner tissues from heat. Seeds held in the pine cones for even 50 years can survive the short exposure to high temperatures. Thick barks of Larix occidentalis, Pinus palustris and Quercus macrocarpa also help to resist fire injuries. In some coniferous plants, leaves are fire resistant due to poor content of resinous materials.

This happened on May 4, 2000 in Bandelier National Monument, a park in New Mexico. Officials planned a fire to burn off accumulated dry wood to prevent a catastrophic blaze likely to be set off by lightening. But unexpectedly high winds and dry weather conditions sent the blaze out of control. Over 400 housing units in the nearby town of Los Alamos were destroyed and 11,000 residents had to be evacuated. The fire raged on for several days and consumed about 20,000 hectares of land. This is a dramatic case of controlled burning getting out of control. Following this incident, the idea of setting small fires in order to prevent big ones suffered a setback.

Experts argued against interfering with nature and suggested safer methods of reducing underbrush and debris that fuel wild fires. People could be allowed to haul these away for firewood or convert it to wood chips. Even selective logging could be encouraged.

Experts, however, concede that planned fires are not without risk. But these are less than the risk of letting wildfire burn unchecked or trying to exclude all fire. Meanwhile, wildlife ecologists maintained that the blaze in New Mexico would lead to the creation of new and better homes for untold numbers of deer, fox, owls and other creatures of the forest!