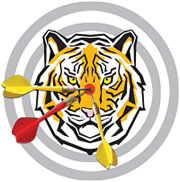 Tigers from Panna National Park in Madhya Pradesh disappeared because they wandered out of the park and got poached.

The forest department could not be held responsible for the loss because its jurisdiction ended within the park, says a state government committee report. The report prepared by state forest officials this year came to light through a Right To Information application filed by Shehla Masood of the non-profit UDAI in Bhopal.

The report states in 2002 the park had an excellent habitat for wildlife, lots of prey and a tiger population of 29. The tigers, however, jostled for space and their territorial fights increased. A younger male would capture the territory of an older tiger and kill his cubs. This stressed the females in the territory too —typically, a male’s territory encompasses three or four tigresses’ territories—who moved out of the park and were poached. The report also talks of excessive tourism, inadequate infrastructure for field staff and lack of transparency on the part of the forest department as reasons for loss of tigers. But it insists that the tipping point is the saturation in the population of tigers.

“The committee has twisted our data to suit its needs,” said Raghu Chundawat who sounded the alarm on tigers disappearing in Panna for the first time in 2005. He studied tigers in the park from 1995 to 2004 and found 23 tigers missing. But till 2009 the state forest department maintained the park had more than 30 tigers. In March 2009, at the insistence of the National Tiger Conservation Authority (NTCA), the Union environment ministry sent a team of wildlife experts, including scientists and forest officials, to Panna.

The ministry team concluded poaching in the park was the main reason for the loss of tigers and that forest officials must be held responsible. This conclusion was not to the state’s liking, which in May 2009 set up its own committee of forest department officials, including NTCA member secretary. The authority, though, did not endorse this study. “The study is speculative and not based on science or research. The theory on tigresses’ straying is not based on data,” said Rajesh Gopal, member secretary of NTCA. “We recorded one case of infanticide.

Besides, just one tigress extended 10 per cent of her range outside the park. This has become ‘females extending their range’ in the report,” Chundawat said. K Ullas Karanth of Wildlife Conservation Society in Bengaluru asked if the habitat and prey base were good, why would the tigresses move beyond their territories. “Our studies indicate populations at saturation density can continue at those levels for long,” he added.

In any case, said Chundawat, all poaching incidents were from within the park. “But the state government re port does not blame anyone. Some one has to take responsibility, otherwise we will see more Pannas,” said Belinda Wright of the Wildlife Protection Society of India. Masood, who filed the RTI application, agreed that individuals, not the system, must be held accountable. P K Sen, former head of Project Tiger who was a part of the ministry team, added that senior officials—chief wildlife warden, principal chief conservator of forests and others—should have ensured territorial forest department worked with the park management to protect the tigers.

When tigers go out of the park it is the responsibility of the territorial forest department and the police to prevent poaching. Chundawat added that officials such as the chief wildlife warden have authority outside the park as well. “Either they are incompetent or couldn’t be bothered to do anything,” he said. The state committee does recommend better cooperation between the forest department and the police. Other recommendations include creating a buffer zone and focusing on the future of tigers relocated from Kanha and Bandhavgarh parks (see ‘Panna to get two tigresses’, Down To Earth, December 16-31, 2008).

“For the conservation of the Panna landscape and tigers the committee’s report has to be read in detail, not selectively, and the recommendations implemented,” said Ravi Singh, a member of the state committee.