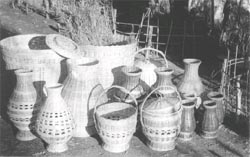 the Dropadi Naari Niketan Shantikunj, spread over 300 hectares near the township of Didihat in Pithoragarh district of Uttar Pradesh's Kumaon region, is a repository of 120-odd species of plants, ranging from tall trees to small shrubs. About 2,200 metres above sea level, Shantikunj is a storehouse of various floral species, a fish pond where culture of carp is carried out, a small angora rabbit farm and numerous nurseries of floral and medicinal species as well as Chinese hybrids and Assam tea. More than two-thirds of the farm is devoted to five bamboo species of the Thamnocalanus group, which is known here as ringal .

All this is the result of the efforts of one individual, Kunwar Damodar Singh. Singh's story is the story of Shantikunj, or the other way around. He spent his childhood as a loner, and started befriending his only proximals -- birds and plants. In 1978, he resigned from the position of village development officer much prior to his age of retirement and began pursuing his dream.

The arduous task began in 1980 when he started planting trees of native varieties such as banj ( Quercus leucotrichophora ) and deodar ( Cedrus deodara ). He faced problems as some miscreants used to damage or uproot the saplings. He tried to use the religious sentiments of the people by tying a sacred red cloth to the saplings, but this did not work. Other means to protect the saplings also met with only limited success as people had started stealing the precious ringal for their own use.

He finally resorted to planting trees in each household of the village. This was successful, and resulted in 412,400 plants of various species coming up in the area. And this does not include the 9,000,000-odd saplings already distributed to various governmental and non-governmental agencies. Each year, his nurseries yield between 100,000 and 150,000 saplings for distribution. Of the 120-odd species that are nurtured here, there are 28 trees, 30 shrubs and herbs, 25 fruit-bearing trees and the rest are medicinal plants. The greenery created by Singh's efforts has resulted in a small stream that has been diverted to nourish the fishpond, the water being subsequently channeled for irrigation.
Singh's innovations are worth taking note of. An example: propagating the shiling ( Osmanthus fragrans ) is very difficult, almost impossible. But Singh has an answer: "I knew that birds have an important role in the propagation of seeds and that after they eat them, the seeds remain in their bodies for 7-8 hours at a temperature of 39.5C-40.5C. Thus, I put the seeds in a bag of bird droppings and kept it at that temperature." After the required interval of time, he sowed the seeds and sure enough, they sprouted.

Another example of his ingenuity is what he calls simulated rainfall. Singh believes that pouring water directly on plants or flooding them have undue harmful effects, whereas simulated rainfall brings down several useful airborne microorganisms, thereby increasing soil fertility.

As Singh wants to make better use of his resources, he has written innumerable letters to several authorities at the district and the state level. He wants a cottage handicraft plant to be set up at Didihat, the nearest township. This would not only utilise the 90 tonnes of standing ringal but also the other produce that comes from his efforts, such as angora wool and medicinal plant extracts. He also wants the initiation of activities like crafting of day-to-day implements and casting of statues.

But all his efforts to draw the attention of the authorities have been in vain. The man's efforts have not received the due recognition, and officials have turned a deaf ear. On an average, more than five truckloads of ringal goes waste every year. Singh is desperate about finding buyers of the precious angora wool, and is willing to sell it for half the market price.

When several crore rupees are spent each year on afforestation programmes with a 14 per cent survival rate of saplings, it is important that people like Singh are brought forward and their expertise used in national interest.