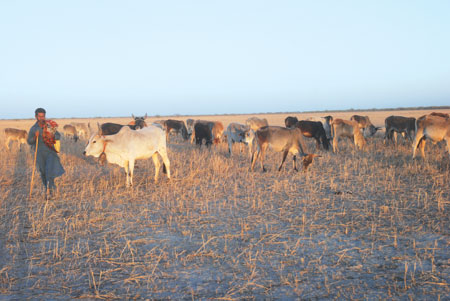 For nearly a decade, residents of Sargu village in Kachchh have been diligently nurturing a patch of land next to their village. Tufts of lush green grass and trees like neem and acacia now fill the once-barren three hectares. A traditional shallow well holds enough water even in the dry month of March. The residents call it vaada, the garden.

Vaada’s greenery is in sharp contrast to the vast expanse of arid land that surrounds it. Dust-laden winds and stretches of dry grass give the landscape the appearance of a desert. The only sight of greenery along the desolate expanse is scattered growth of Prosopis juliflora, or vilayati kikar as the thorny exotic weed is known in Hindi.

“It is the gando bawal (or mad tree, as people in Kachchh refer to P juliflora) that has eaten up all the vegetation in the Banni,” says Salim Node, a leader of Maldhari graziers’ community in Sargu.

The Banni is a belt of arid grassland ecosystem that extends over 240,000 hectares (ha) between mainland Kachchh and the Great Rann of Kachchh in Gujarat. Once known as the largest grassland of its kind in Asia, the Banni has severely degraded over the past few decades. Conservationists say the degradation is due to repeated droughts, increasing salinity and invasion of P juliflora, which the forest department planted along the coasts in the 1960s to check salinity. The weed now spreads in over 60 per cent of the Banni grassland.

“No other tree grows here anymore. Gando bawal dries out the soil and just does not let anything grow near it,” says Node. “We created vaada by uprooting all gando bawal on the patch and ensuring that the plant does not regenerate. We also revived our traditional water harvesting system. Once the land is free of gando bawal, it retains moisture and the native grass regenerates,” he adds.

Sargu is not the only village in the Banni where the Maldharis are nurturing patches of grassland. Most of the 48 villages claim to have created vaadas, and are showcasing them to prove that they are the best managers of the Banni, not the forest department.

Genesis of the struggle

Though Banni was declared a protected forest way back in 1955, the state forest department woke up to its responsibility only in 2009 and prepared a working plan for restoration and management of the degraded grassland. The working plan makes the grasslands off limits for grazing livestock, the main source of living for the Maldharis.

About 60,000 ha of the Banni is already off limits as it is part of the Kutch Desert Sanctuary and the Chari-Dhand wetland conservation reserve. The forest department earmarks 36 per cent of the remaining grassland to regenerate native grass varieties and another 42 per cent for afforestation. In rest of the grassland, the state forest development corporation will commercially harvest P juliflora for making charcoal. The Banni will be restored and managed as plots of 100 ha, which will remain fenced off for five years on a rotational basis, says the plan. 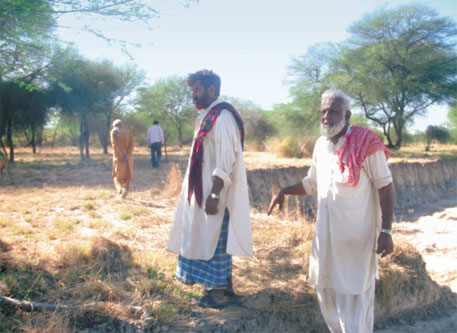 The community of 25,000 Maldharis alleges the working plan does not take into account their customary grazing practice and threatens their livelihood of cattle rearing and breeding.

An estimate by Sahjeevan, a non-profit in Kachchh that works on livelihood issues of the Maldharis shows that during the 20 years of implementation of the working plan, at any given point of time after five years at least 55,000 ha of the Banni would remain fenced. “Such random enclosure of the grassland would jeopardise the region’s livestock economy,” says Sabyasachi Das of Sahjeevan. He explains that of about 100,000 cattle heads that graze in the grassland, 60,000 are Banni buffaloes. This breed raised by the maldharis is known for good milk yield. They are night grazers and need up to 15 kilometres of free grazing. Another breed raised by the Maldharis is the Kankrej bullock, which is in high demand across the Saurashtra region. It also requires free grazing. The sale of milk, milk products, live bullocks and buffaloes reared in the Banni grasslands contribute Rs 100 crore per annum to the state’s economy. The working plan will hit this economy, Das says.

The working plan will also affect the region’s unique ecology. Nitin Rai of Bengaluru-based non-profit Ashoka Trust for Research on Ecology and Environment, who has been studying grassland ecology, says grassland ecosystems are linked through a variety of flows such as water, soil and animal movement. The Maldharis have historically used the grassland as a continuous landscape, moving from one location to another to access water, fodder and markets. This connection will get disrupted if the forest department breaks up the landscape into compartments and manages each separately.

The Maldharis, who have traditionally depended on Banni’s pasture, do not agree with the forest department’s claim that grazing harms the grassland. “The cattle graze on the pastureland on a rotating basis. This allows a patch to regenerate. Besides, they help in seed dispersal,” says Node.

He questions the measures proposed by the forest department to regenerate the grassland. The plan is to plough the land, sow grass seeds and grow it by using fertilisers. “This will not work here,” Node says. The roots of perennial grasses remain in the ground even after grazing and regenerate once they receive rain. Ploughing will destroy its existing root-system, he adds.

Rai agrees with the Maldharis’ wisdom. Rainfall is the biggest driver of productivity in these arid and variable ecosystems. So no amount of ploughing, seeding and enclosing will work unless there is rain. He says removing P juliflora is the best way to regenerate the Banni grassland.

There are allegations that the real intention of the forest department is not to regenerate the grassland but to commercially harvest the wood of P juliflora. “There have been reports that the forest development corporation has signed an MoU with a few power companies to provide them P juliflora as fuel for their power plants. In 2011, a few companies reportedly conducted surveys regarding the availability of the tree in Banni,” alleges Ramesh Bhatti of Sahjeevan.

A grazier from a village in the Banni told this correspondent that in 2011, the forest department had called the village panchayats to sign an MoU with them for harvesting P juliflora. Under the MoU, villagers were promised wages for cutting the trees. The villagers, however, refused to sign the MoU because the forest department did not agree to their demand of permanently uprooting P juliflora.

According to a Supreme Court ruling one cannot harvest forest without a working plan. Bhatti says one doubts if the working plan was an excuse for harvesting P juliflora.

Bhatti’s scepticism stems from the way the working plan was prepared and was implemented. The National Working Plan Code mandates that before preparing the working plan for a forest, the department should carry out socio-economic survey of forest dwellers. But the working plan notes that no such survey was conducted. “There is no mention of settlements, grazing land or grazing rights of the Maldharis in the plan. It treats the Banni as if nobody lives there,” says Das. This is crucial because the Maldharis do not have records of their land rights. In 1955 the government declared the Banni a protected forest but is yet to transfer land to the forest department. The land rights of the Maldharis were also not settled before declaring the Banni a protected forest, Das explains.

While the working plan was approved by the Union environment ministry in 2010, the Maldharis got to know about it two years later when the forest department began implementing the working plan. Fearing that the plan would hamper the access to their cattle for open grazing in Banni, the Maldharis resorted to the Forest Rights Act (FRA) of 2006. The Act recognises traditional rights of forest dwellers on forest resources. In the first week of February last year, 15 of the 19 village panchayats in Banni sent notices to the state government, asking it to withdraw the working plan and demanding their right to manage the grasslands under FRA. They also threatened to sue the government if it failed to respond to the demand. 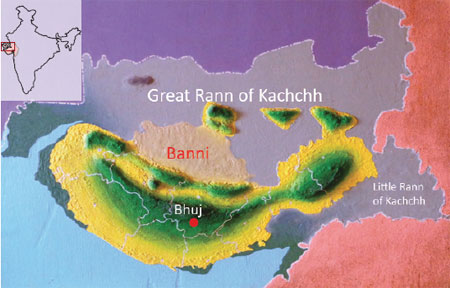 The state government assured the Maldharis that it would implement FRA after the Assembly elections that were due last year. But there was no order to withdraw the working plan.

“The department had opened several offices in the Banni. We hear that the government has allocated funds and appointed 60 forest personnel for implementing the working plan. They started some work in Luna village but the residents did not allow them to go ahead,” says Ramzan Halepotra, president of Banni Breeders Association. The working plan has since been kept in abeyance.

Forest officials attribute this delay to the reluctance of the revenue department to transfer land. When asked about the Maldharis’ rights over their pasture, a high-ranking forest official in the district told Down To Earth that it is important to implement the working plan to protect the grassland that has decayed due to lack of protection. “The rights of the villagers are not going to be affected. We are ready to offer each family four hectares for cultivation and permit stall-feeding for their cattle. Open grazing, however, will not be allowed as it harms the grassland,” he says.

The pastoralists do not want individual rights over patches of land for cultivation. “We are not farmers. Our life and culture revolves around grassland and we want the community’s right for managing this resource,” says Halepotra.

A crucial challenge is that as per FRA forest dwellers who do not belong to scheduled tribes have to prove that they have been dependent on the forest for at least three generations or 75 years. The Maldharis claim that the erstwhile ruler of Kachchh, Maharav Khengarji, had given the land to their community in the 19th century for grazing. The forest department refutes the claim. “Most of the Maldharis are refugees who have settled in the grassland following Partition. They do not have any land of their own. Even the vaadas they have created are encroachments,” says a forest official.

The Maldharis are, however, preparing to file their claims under FRA and readying themselves for a long haul of battle to claim their rights.