Is an avian flu pandemic imminent? As panic sends the world into a flutter, the Indian response still struggles to take wing, discover padmaparna ghosh and t v jayan 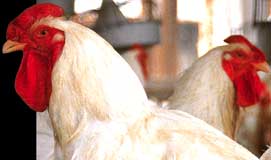 The guns are drawn, the coffers are stocked and international border security tightened. The preparations portend a global disaster -- a possible pandemic as the avian influenza ominously overruns countries. A blitzkrieg of media reports and press releases by international animal and human health organisations push the panic button. Estimates of death toll and economic loss are running out of zeroes.

The globe's feathers are ruffled, prompting astronomical flu funds and a mad scramble to stock drugs and vaccines.

us President George Bush has announced a us $7.1 billion flu plan, which even involves deploying troops. Of the massive flu fund, us $1.5 billion are earmarked to develop an experimental vaccine and us $1 billion to buy two antiviral drugs -- Tamiflu (oseltamivir) and Relenza (zanamivir).

The whole spectre of a global catastrophe is created on one premise: a potential mutation in the virus that might enable it to jump from human to human. But as of now, only cases of bird-to-human transfer have been reported; not a single case of human-to-human transfer of an avian influenza virus is known.


Proponents of a bird flu pandemic untiringly cite the catastrophic Spanish flu of 1918, which killed 20-30 million people in Europe, South America and the us. But numerous studies have indicated that the 1918 strain didn't have an avian origin. Jeffery K Taubenberger of the Armed Forces Institute of Pathology in the us, one of the foremost researchers on the 1918 pandemic, reconstructed the virus from excavated bodies and compared its genetic constitution with that of birds captured in 1918. His conclusion: the extremely pathogenic virus did not acquire its genetic material directly from a bird (Journal of Virology, Vol 76, No 15, August, 2002).

Having claimed 68 human lives since December 2003, avian flu is being seen as a gigantic killer. But a pandemic is possible only if the virus mutates and starts spreading from human to human. Recently, the World Health Organization (who) pegged a possible avian flu human toll at a dramatic maximum of 150 million people, but soon scaled it down to 7.4 million. The World Bank has quoted us $800 billion as the possible loss from avian flu to the global economy and promised us $1 billion to combat it.

The only number that appears insignificant under the circumstances is the actual death toll of a mere 68 (see box: Who will make a killing?).

The virus strain behind the fatalities is referred to as h5n1. It is the only avian influenza virus to have claimed human lives since 1980. Scientists say because of the extremely versatile nature of influenza viruses, it is difficult to determine which avian flu strain may jump to humans. Between 1980 and 1997, there have been four recorded outbreaks of avian viruses that were highly pathogenic to birds. The first of these occurred -- not in Asia, but in the us -- in 1983 and involved the strain h5n3, according to the us-based Centers for Disease Control. But none of the four outbreaks affected humans.

According to Peter Palese, a microbiologist at the Mount Sinai School of Medicine, New York, the threat from h5n1 flu virus is a false alarm. Studies of blood samples collected in 1992 from people in rural China indicate that millions of people had developed antibodies to the h5n1 strain. This implied that they had recovered from the infection without any apparent ailment. Moreover, the h5n 1 avian flu strain has been circulating in China for almost a decade without any reported incidence of a human-to-human transmission.