From bricks to black dust

As traditional coal-run brick kilns in Kaithal turn polluters, moves are afloat to shift them out of villages

From bricks to black dust 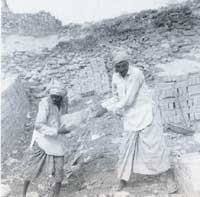 ON MARCH 3, Navita Singh, senior sub-judge of Haryana's Kaithal district, created a precedent when she passed a permanent injunction restraining the working of one of Kaithal's 350 odd punjawas -- outdated brick kilns using coal dust that, resembling a hillock, have no chimneys that distinguish "modern" brick kilns. Singh's order came in the wake of a petition filed by villagers of Bandrana, alleging that the noxious, black, coal smoke from the punjawa was a health hazard.

The hitherto peaceful village community has today become a boiling pot of controversies, as growing numbers have pushed some 60 households closer to the punjawa -- a massive hulk on 2 ha of land on the eastern rim of the village where 3 lakh bricks are baked every fortnight by the kumhars (potters). When land holdings were consolidated in 1970, the site on which the punjawa is located was recorded as panchayat land. This has resulted in more than 30 houses coming up on 3 sides of the punjawa.


In the past, the punjawa used wood, easily available in the countryside. With wood becoming dearer and forest officials hauling up punjawa owners for chopping trees, it was replaced by the low priced, poor quality coal dust high on ash. In this single transition the punjawas became a source of pollution (see box).

Even as the menace from the ash in the air grew, the seeds were sown for a campaign to relocate the punjawa. The kumhars were, however, reluctant to move shop and 4 resolutions were passed in Bandrana in 1988 to have the punjawa shifted. Two of the earlier resolutions were passed at a meeting of all the villagers -- every family was represented by at least one person -- while the other 2 were passed by the panchayat after the panchayat elections in September 1988. The panchayat even agreed to provide land to the kumhars to set up a new punjawa.

When efforts at the village level failed and the last sarpanch of the village, Puran Singh, expressed his inability to do anything about the punjawa, a body of village elders petitioned to Kaithal's former deputy commissioner, Maha Singh Malik.

Malik, they say, did little more than to give them a patient hearing. In an obvious attempt to roll the ball out of their court, an official in the district commissioner's office prodded them to approach the district food and civil supplies controller, who could take action, since the punjawas had illegal access to the coal dust.

Ultimately, after a muniadi (general assembly) to obtain sanction of the entire village, a petition was filed in the court of the senior sub-judge of Kaithal on March 20, 1989. The money to fight the case was collected from the villagers. Says Bandrana sarpanch Lakhpat Rai, who along with Bhagat Ram and Subhash Chand, 2 elderly representatives of the village, petitioned the courts, "The punjawa run by the kumhars has become a curse. Everybody, including their own families, want clean air to breathe. The shifting will benefit all."

A local doctor, Ashwini Garg, was emphatic that the proximity of the punjawa presented a health hazard for the villagers. Garg says he has many patients from Bandrana who suffer from pneumoconiosis (also known as "black lung", afflicting those inhaling excessive dust) and accompanying respiratory ailments.

The kumhars, however, insist that the punjawa poses no health hazard. "I have been working on the punjawa since I was 8 years old. My health is all right," says Karta Ram, the octogenarian leader of the Bandrana kumhars. "The hazards to the environment from the punjawa are being exaggerated," says Kishan Sersia of Kithana village, "The villagers' new-found awareness is a recent affair, thanks to all sorts of media propaganda."


According to the villagers, the Bandrana pujwara vomited noxious fumes with the first spell of rain in 1993, leading to the death of 4 villagers. The district administration, however, was not able to confirm the causes of the deaths because the dead had been cremated before the authorities were informed. Kesa Ram, whose brother Ram Kishan died, insists that the deaths were due to the fumes from the punjawa. "We should have got a post mortem done. Only then the police could set them right," rues Kesa Ram.

The kumhars dispute this. "The deaths weren't due to the fumes," says Karta Ram, "they were due to the outbreak of many diseases following the rains." The kumhars are unwilling to leave the present site for 2 reasons: first, they are not sure if any land will be provided once they vacate the present site; and, second, setting up a similar punjawa will take years. Karta Ram's grandson, Ram Bhaj, says, "The villagers are against us because we have prospered. The moment we leave, they will show us the way to the courts."

Resistance from the people in the neighbourhood of punjawas is also building up in other parts of Kaithal. Twenty-three punjawas have been closed down in the district due to objections raised by local residents. The Kaithal deputy commissioner, Zille Singh, says that he is aware of the problem punjawas pose. According to him, a public interest litigation could be filed by the district attorney on behalf of the district's population who have to inhale the smoke from the many punjawas that dot Kaithal's landscape.