From miracle cures to holistic development

A doctor whose aim once was to treat poor patients, now helps Soliga tribals to assert their rights and choose their own way of development.

From miracle cures to holistic development 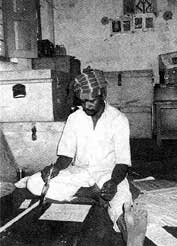 THE PRISTINE woods of the Biligirirangan Hills in Mysore district, a reserved forest, are marred by denudation that has left only a few eucalyptus and silver oak patches on the lower slopes. The destruction by contractors has wrought havoc on the Soliga tribals, who have lived in Biligirirangam for centuries. There are about 20,000 of them now, living in nearly 100 podus (settlements) in Mysore and Kodagu districts.

The Soligas were originally hunters and shifting cultivators whose marginalisation began early in the 20th century, with the start of commercial exploitation of the forests. When the Biligirirangam Hills was declared a reserved forest, it proved to be a mixed blessings: The denudation halted, but the Soligas' traditional way of life suffered a disruption because they were denied access to the forest and became impoverished within a few decades.

The government allotted some land to them, but they were not skilled in farming. Only five or six Soligas were literate. Their children were malnourished and diarrhoeal diseases were rampant. Their plight was worsened because they were at the mercy of unscrupulous forest officials and contractors.

In 1979, however, a young allopath named H Sudarshan who once aspired to be a monk, arrived in the Biligirirangam Hills "to do curative health work with a missionary zeal" (See box). This resulted in Sudarshan and some of his friends forming in 1981 the Vivekananda Girijani Kalyan Kendra (VGKK).

Though Sudarshan was able to cure some Soligas of snake bites and establish a rapport with them, he realised his priorities had to change. "Medical help alone was not enough. What was needed was a programme to develop them in their own surroundings," he says.
VGKK organised informal adult education classes, which gradually became transformed into a formal high school and hostel. Present enrolment is 505 students, of whom 218 are girls. VGKK treasurer Somasudaram says, "We try not to damage the Soligas' traditional values while educating them." The result is that many of the schoolchildren know the names and uses of more than 300 local herbs and trees.

Each student is required to learn one of 13 crafts, ranging from carpentry to bee-keeping, and students who discontinue their studies generally work in the craft centres. Products made by students are marketed through a cooperative store on campus, and their honey is quite popular.

Health care is another major activity of the VGKK, though they blend it with a touch of black magic. A medical centre, with 10 beds and a pathology laboratory, serves as the base hospital. "But," says resident medical officer V S Sridhar, "because of the Soligas' faith in supernatural cures, patient are sometimes sent to traditional priests for psychological relief."
Thirty workers chosen by the Soliga community have been trained in allopathic methods of detecting diseases and providing first aid. VGKK's child immunisation programmes also have been effective. The use of traditional herbal medicines is encouraged and experiments are being conducted to cultivate them. An oral rehydration scheme has dramatically reduced diarrhoeal deaths. The mother-and-child health care programme has taken off successfully and Sridhar says the result of all this is that the incidence of malnutrition has declined from 50 per cent to 15 per cent. The government now recognises VGKK as a rural training centre for medical interns.

Other VGKK programmes include providing the Soligas with milch animals, installing tubewells to supply drinking water and freeing bonded labourers. VGKK's work has spread from the hills to Yelandur, Chamrajnagar and Kollegal talukas in Mysore district and Satyamangalam taluka in neighbouring Tamil Nadu.

Perhaps VGKK's most spectacular success has been the organising of development councils called abhivrudhhi sanghas, which protect the Soligas from rapacious outsiders while also resolving disputes within the community. Their work is coordinated by the Soliga Abhivrudhhi Maha Sangha, which helps the tribals get back their land and ensures the forest department employs only Soligas in work on the plantations.

These sanghas are considered so useful, VGKK governing body member Mullandi Ranga Gowda, says, "Even if the VGKK goes away, we will continue with the sanghas. They are powerful weapons with which we can flight exploitation and live with dignity. We are not afraid of any one and can talk to officials on our own terms."