Two global meetings chart a course for weeding out biopiracy 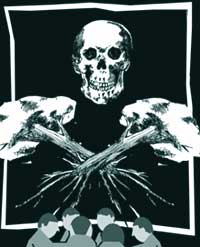 they might well be the modern-day buccaneers. To further their research, agricultural and pharmaceutical companies often tap local communities for traditional knowledge relating to the use of biological resources. The conglomerates lose no time in appropriating this painstakingly assimilated information. And make a fast buck by developing products based on these stolen ideas.

How can this profit-making voyage be steered so that local communities, too get their share? In other words, how best can access to such knowledge and biological resources by companies be controlled to prevent their theft or 'biopiracy'?

Two conferences made headway on this issue recently -- one addressing plant genetic resources for food and agriculture (pgrfa) in particular, and the other focusing on access and benefit sharing (abs) of biological resources in general. The former, recently concluded under the auspices of the Food and Agriculture Organisation (fao) in Rome, Italy, resulted in an International Treaty on Plant Genetic Resources for Food and Agriculture -- the 'Seeds Treaty'. The latter, held under the auspices of the Convention on Biological Diversity (cbd) in October, suggested a set of 'Bonn guidelines' for abs , which will now be discussed by the next conference of parties (cop) to the cbd . Under the new Seeds Treaty, 35 genera of crops and 29 forages have been listed in a multilateral system (ms) (see box: Shortlisted crops) . These seeds will be available to plant breeders to develop commercial varieties in exchange for royalties. The amount paid will be assembled in a trust fund, which will be used to finance projects to conserve pgrfa . The treaty also provides for the exchange of information and technology between countries, particularly to the benefit of developing countries and nations in transition. A controversy erupted during negotiations over the list of crops covered under the treaty, as developing countries were hesitant to commit themselves to the pact unless they were sure of its success. Rather than deal through a flawed treaty, they hope to get more commercial benefit through bilateral trade deals. As a result, the current list only covers a small proportion of over 100 food crops of importance to food security, and some 18,000 forages of value to food and agriculture. Soyabean, peanuts, peppers, tomatoes, onions and sugarcane are among the obvious omissions.

The issue of intellectual property rights (ipr) on the listed crop species also proved contentious. Not only did non-governmental organisations (ngos) want crop seeds, but all genetic resources they contain were exempted from exclusive private ownership through patenting and other forms of ipr . The move was opposed by agriculture-exporting countries such as the us and Australia. The Treaty merely prevents recipients of genetic resources from the ms , from claiming ipr on the resource "in the form received". In other words, they can patent derivatives. Barcelona-based ngo Genetic Resources Action International (grain) claims this is a "contradictory compromise, likely to play in favour of the North". T Which agreement -- the Seeds Treaty or the trips pact -- will dominate in cases of future conflict? This proved to be a divisive question, with Australia, Argentina, Canada and the us contending that this treaty should not affect the rights and obligations of countries under the World Trade Organisation (wto) . Other nations, including Iran and Norway, refused to subordinate the Treaty to other agreements. As a result, the treaty only contains vague sentences on "mutual supportiveness" and "absence of hierarchies", similar to the provisions of the Cartagena Protocol on Biodiversity and the Rotterdam Convention on Prior Informed Consent.

After a seven-year negotiating history, most delegates regarded this treaty as the best possible means for the exchange of pgrfa for food security. ngos offered a mixed reaction to the agreement. They considered it historic, he ngo Intermediate Technology Development Group (itdg) from Rugby, uk , expects that "this little phrase will make it almost impossible to achieve the Convention's aims of ensuring free access to these genetic resources". Because this sentence means that ipr on modified parts and components will be permitted. And the definition of sufficient modification is unclear. grain says many industrialised countries currently grant patents on genes for simply having been isolated from a plant. Thus the Seeds Treaty may not serve as an instrument to counter the privatisation of pgrfa .

Moreover, this provision is in direct conflict with the World Trade Organisation's agreement on Trade Related Intellectual Property Rights (trips), under which countries are bound to offer patent protection for technical innovations.but criticised it as unfair since benefits are scarce and financial resources from industrialised countries are not commensurate with the contribution made by farmers.


Unequal negotiating capacity in bilateral agreements, for instance between pharmaceutical companies and local communities, precludes the goal of equitable sharing of benefits as it is foreseen in the cbd . The cbd - cop - 5 , held in Nairobi, Kenya, in May 2000, had therefore assigned the Working Group on access and benefit sharing to develop guidelines on a variety of concerns. The Group has outlined a set of international generic guidelines that could prescribe abs frameworks, including among other things:

• Guidelines for the roles, responsibilities and participation of stakeholders

While the content of the guidelines seems to have wide support, the views over their purpose and use differ. Hermann Meyer from the German ngo Forum for Environment and Development says he regards these guidelines as superfluous. According to Meyer, they could only assist countries without abs laws in drawing up such legislation. But "as much more elaborate model laws already exist in different regions, why do we need the rather generic draft Bonn guidelines"? he asks. Elpidio V Peria from the South East Asia Regional Institute for Community Education (searice) goes even further and contends: "This document should be rejected by cop-6 if it will remain a voluntary instrument since it doesn't provide anything that will ensure the best behaviour of bioprospectors worldwide."

In the negotiations, delegates identified draft elements for an action plan for capacity-building, to ensure that people at all levels of society, particularly in countries of origin, are able to participate effectively. They called for an open-ended workshop on capacity-building for abs .

The inclusion of intellectual property rights in access and benefit sharing arrangements proved to be contentious. While recent cases of American firms patenting traditional Basmati rice or the natural pesticide 'neem' support the view that the patent system of the North serves as a mechanism for excluding developing countries from using their own genetic resources, industrialised countries are concerned about possible undermining of internationally recognised ipr s as anchored in wto's trips agreement. The preamble of the final text on the role of ipr in the implementation of abs arrangements now recognises that "intellectual property rights, under certain circumstances, constrain access to and use of genetic resources and scientific research". As this provision recognises the potentially negative role of ipr , it met with strong resistance from the us , the European Union (eu) and industry but was hailed by developing countries.

Delegates conveyed broad satisfaction with the outcome of the meeting, and the completion of the discussions on the bulk of the draft Bonn guidelines. The eu holds the view that the guidelines, when adopted by cop-6 and implemented by cbd Parties, "can help in reducing legal uncertainty and transaction costs, preventing possible cases of 'biopiracy' while contributing to the conservation and sustainable use of genetic resources". However, outstanding issues remain to be resolved at cop-6 .


The negotiation of the Seeds Treaty is now complete. But it has been a long haul since these issues were taken up in the 1992 Convention on Biological Diversity. Even before the cbd came into force in December 1993, fao had initiated an International Undertaking (iu). The iu was intended to clarify the handling of agriculturally relevant collections of genetic resources outside their natural habitats, in particular the plant collections of the Seed Banks of the North, and botanical gardens collections. However, a major shortcoming of the iu was its voluntary nature: it was not binding under international law. At the national level, several countries in the South have tried legislation to control access and ensure 'benefit sharing' in the past. But global consensus on the best way ahead has remained elusive.

The Seeds Treaty still has to overcome some major obstacles before it can be brought into force. First, its ratification is at stake. This raises the need to educate national policy-makers on what the multilateral system is. Further, the handling of other collections of genetic resources, like botanical gardens or those gathered privately by biotech companies, collected pre- cbd must be clarified.

If the treaty is signed, gene bank representatives foresee big problems in implementing it. They say they have no idea how to track the use of their seeds in commercial products in order to collect royalties. When a particular sample of seeds leaves a public gene bank, it "goes into the gene pool and is crossed with a gazillion different things". Twenty years later, it could become one distant ancestor of a commercial product. "Who's going to track this?" ask gene bank representatives.

The Seeds Treaty's direct impact on farmers will be small. As it is designed to set rules for the formal research and breeding sector, the immediate effects will mainly be felt there. But through the ms, there will be actual impacts on farmers. The pact may provide at least some shelter from the bilateral wheeling and dealing that has dominated the management of the world's shrinking genetic resources so far.

pgrfa under the Seeds Treaty will now be governed under the auspices of fao in harmony with the cbd . All countries will have the right to participate in its governance together with the civil society. Therefore, ngos say that the Seeds Treaty has the potential to be a prime example of responsible global governance.

The draft abs guidelines, as agreed upon in Bonn, will finally be sent to the sixth meeting of the Conference of the Parties to the cbd , to be held next April in The Hague, Netherlands. In this forum, the draft guidelines are expected to be discussed, completed and adopted.

However, hopes from this development should be realistic. In preparation for the abs meeting, Achim Seiler from the Social Science Research Center in Berlin, Germany, and Graham Dutfield from Oxford University, uk , conducted an abs study commissioned by the German government. The authors contend that it is "highly unlikely that any abs system will eradicate the unauthorised collection of genetic material and use of traditional knowledge. The best that can be hoped is that it will reduce abuses".

Biological resources should also not be regarded as 'green petroleum', say Seiler and Dutfield, and the setting up of a 'genetic opec' must be doubted. But the benefits biodiversity-rich countries can expect from abs regulations might be substantial. While direct monetary benefits may be limited in most cases, non-monetary benefits such as joint research, training and technology transfer are essential. And valuable centres of biodiversity are still to be found in the South.

Now, the challenge remains to implement effective and transparent abs frameworks at the national level. But the progress in the international arena on the issue makes it even more clear that some Southern governments have failed to do their homework and design and implement the necessary legislation that protects their communities from exploitation.