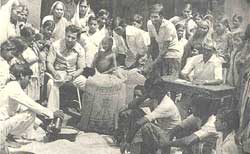 A RURAL health programme operating arolmd Sevagram in Maharashtra has given new expression to Mahatma Gandhi's dream of rural development. The scheme, based on self-help and risk-sharing through insurance, is proof that quality health care can be provided in rural areas at an affordable cost.

The moving force behind the proJect, which covers 23 villages with a combined population of about 19,500, is Ulhas N Jajoo, a doctor at the Mahatma Gandhi Institute of Medical Sciences, who has been involved in welfare work in the region from 1978. He explains, "Our aim was to develop art egalitarian 8r' system so that health services could be accessible to the poorest members for of the community."

A hospital at Sevagram. serves as the base for the village health service scheme. The hospital receives 75 per cent of its funding from the government and the rest from service charges and donations. Its outreach service, however, is supported entirely by funds generated from the villages because, says Jajoo, "charity given from above only fosters dependence. By making use of local resources, the villagers develop a sense of confidence and self-reliance."

Only those villages in which 75 per cent of the poor enrol are included in the health insurance scheme. If the membership falls below this figure, the scheme is withdrawn. Furthermore, to ensure the cooperation of the villagers, only if the panchayat is unanimously elected is the village eligible for enrolment. This rule was introduced to prevent political rivalry from undermining the scheme.
Under the health insurance scheme, a fund is established to set up a dispensary in each village to stock the medicines required for primary health care. Villagers contribute to the fund based on their capacity to pay. Annual payments can be made in the form of a fixed amount of jowl crop at harvest time. Landowners pay according to the number of hectares they own, while landless labourers make a nominal contribution, equivalent to about Rs 16 per year.

Health workers are tr"d by doctors at Sevagram to provide health education to the villagers, treat mild illnesses and diagnose serlo4s cases for reference to the hospital. The Sevagrarn doctor also conducts annual village meetings at which the health worker's performances is reviewed. Meanwhile, the social worker and nurse visit villages regularly to provide maternal and child health care and vaccination services.

insured villagers are treated free at the hospital for unexpected illnesses and receive a 75 per cent subsidy for.planned admissions, such as normal pregnancy and cataract and hernia surgery. Villagers insole who are not insured can avail of the hospital facilities, but they must pay the full cost.

A measure of the success of the schente, no cases Sevagrant health scheme is that more than 75 per cent of the villages in the region are of vaccine-pre- enrolled in the scheme. During the decade that the scheme has been in operation, there ventable illness has been no case of vaccine-preventable illness among children or maternal death during delivery and there has been a sharp decline in perinatal mortality.

These are encouraging achievements, given the high degree of poverty prevailing death during in the region and the low priority given by the 'villagers to their health. As Jajoo says, delivery has been "Within the existing social limitations, the Sevagram scheme offers a replicable model reported- for rural health care."