GEAC has power only to withdraw permission

Arjula R Reddy, a plant geneticist, was appointed co-chairperson of the Genetic Engineering Appraisal Committee (GEAC) in 2009. At present, he holds the position of vice-chancellor of two universities in Andhra Pradesh—Sri Krishnadevaraya University in Anantapur and Yogi Vemana University in Kadapa. In an interview with Down To Earth the scientist talks about the regulatory process involved in approval of genetically modified crops and the politics surrounding this technology

GEAC has power only to withdraw permission 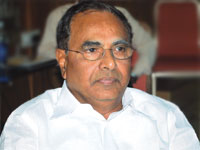 How do you propose to deal with conflict of interest in GEAC?

Around three months ago a document called Declaration of Independence was prepared. Scientists who are members of GEAC were asked to sign it. The declaration states that a scientist can take decisions independently. If a GEAC member is involved in developing crops and some valid objections are raised, he/ she should just quit. They should not wait to be asked to prove that they do not have a conflict of interest.

GEAC members have been accused of not showing any interest in biosafety concerns raised by international scientists of repute. There was no debate on the reports of Eric Giles Seralini, David Andow, etc who analysed the data provided by Mahyco on the company’s work on Bt brinjal.

This is not true. When Seralini’s paper was published a meeting of GEAC was dedicated to discuss his observations. In fact, even Andow’s papers have been discussed. However, I admit that some members have objected to such discussions. Once a GEAC member, who is a biotech scientist, asked us why we should be told by foreign scientists about the problems with our industry’s studies. Some members also believe that such reports are commissioned. But this does not deter GEAC discussions.

How does GEAC respond to the very serious health and environmental concerns raised by international scientists after seeing Mahyco data? Why did GEAC not spot them?

Most of these papers are based on reinterpretation of data rather than original research. GEAC did go through a lot of data over and over again. The data were developed as per the prescribed protocols in the last few years. There is no basic data that is convincing on damage to the environment.

How do you react to states refusing field trials of GM crops? What if more states join this resistance to GM crops?

States’ decisions are not based on just data or any scientific argument. They are based on conviction. Bihar chief minister Nitish Kumar thinks the state does not need GM crops. That is his prerogative. Similarly, another state minister has given the argument that his government wants to ban GM because it is non-vegetarian. Each state’s reason is different.

The fact is that agriculture is a state subject and state governments have the power to decide which crops they want to commercialise. If states are not willing, there is no way GM crops can be introduced.

However, law empowers the Central government to give permission to private and public institutes for research and development of GM crops, and later allow field trials. Since the matter of GM crops is in the Supreme Court, let the apex court decide this matter as well.

All states that have objected to field tests say the same thing— there are unresolved environment issues, worries about erosion of biodiversity, and adverse effect on human health and ecology.

Civil society’s objection to GM crops is a totally different issue. It is a policy matter that needs to be addressed by government.

Why is it that after Mahyco conducted serious irregularities, GEAC let the company off with just a warning? The company used an unapproved cotton hybrid as refugia— area where non-GM crop is grown.

Mahyco has responded saying it took permission for the trials from the director of the Central Institute for Cotton Research in Nagpur. GEAC has taken action accordingly. The committee only has the power to withdraw permission from the company in case of violation.

The issue will be discussed again at the GEAC meeting on May 10. Rules clearly say GEAC can penalise a company for violations.

As the company has appealed again, the final decision is yet to be taken and it would be dealt with accordingly.

Has the functioning of GEAC eroded its credibility?

It is wrong to question the credibility of scientists who are part of GEAC and Review Committee on Genetic Manipulation. Though there are some scientists who may have conflict of interest, it does not mean that all scientists are unaware of their responsibilities. There are certain duties and protocols that have to be followed within a framework. Before you point a finger at the scientist community, remember that they know what they are doing.

What is your response to civil society’s charge that there is no balanced representation in GEAC?

I feel the opposition is more because of national control of agriculture than the technology itself.

Biotechnology is just like nuclear technology. One cannot be sure what the aftereffects would be. What can you oppose? If you oppose GM crops you should also oppose use of pesticides. More and more people are dying because of pesticide use. That is why civil society has taken a stand. It is clearly on one side. How can you put them on a regulatory committee which involves complex scientific issues that have to be critically analysed?
Cover Story Cover Story Scientists NGO Mahyco India Health Effects Health Effects Health Effects GMOs GM Crops Genetic Engineering Bt Cotton Biosafety Agriculture Agricultural Research Agricultural Research
SUPPORT US