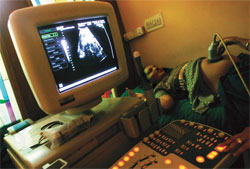 With the country’s child sex ratio hitting an all-time low—944 girls for every 1,000 boys—states are turning to a monitoring device to fix the imbalance. Public health activists say the device, called Silent Observer, is more hogwash than an answer.

Silent Observer can be fitted into sonography machines to allow the authorities to monitor and record pre-natal ultrasound scans taken by doctors. It thus helps the authorities crack down on doctors conducting gender tests, which result in selective abortions.

The device is currently part of a pilot programme in Maharashtra’s Kolhapur district, which has a child sex ratio of 845 girls per 1,000 boys. The project was launched by district magistrate Laxmikant Deshmukh in 2009. Since then, the device has been installed in hundreds of ultrasound machines in clinincs and hospitals across the district. “Through this, we are closely monitoring the doctors. If a doctor is caught disclosing the sex of the foetus, the images captured in Silent Observer can be presented as evidence in court,” explains Deshmukh. He claims the average child sex ratio in Kolhapur has increased from 845 to 849 within a year of installing the device.

Prompted by the success, Haryana has installed the device on an experimental basis in Panchkula government hospital. Punjab also plans to implement the project. Madhya Pradesh and Rajasthan recently sent teams to Kolhapur to see the working of the project.

Doctors and civil society groups working in Kolhapur challenge the efficacy of the device and allege it is a money-making venture. Manufactured by a private company, Magnum Opus, each device costs Rs 28,500.

Tajinder Singh, radiologist from Yamuna Nagar district of Haryana, says the device cannot implicate doctors just for checking the sex of the foetus. As per the Pre-Conception and Pre-Natal Diagnostic Techniques (PCPNDT) Act, communicating the sex of the foetus to parents is criminal, but not viewing it. A doctor has to check the genitalia to ascertain if the baby is growing healthy.

Also, the device is plugged in externally and can be turned off. This way, there will be no record of the tests conducted, says Varsha Deshpande, lawyer and activist from Kolhapur. The device can be attached only to stationary machines whereas, portable ultrasound machines, of the size of a laptop, are now available in the market. Sex selective abortions are continuing despite the installation of Silent Observer. Even after 19 months of launching the project, not a single doctor or radiologist has been booked for disclosing the sex of the foetus in the district, she adds.

A recent report by the UN Population Fund (UNFPA) has also questioned the efficacy of the project. Though the district saw slight improvement in the child sex ratio, the report says, the difference is “not significant”. Of the doctors interviewed by the UNFPA team, only 10 per cent said that images recorded in Silent Observer were copied from their centres and that too only once.

“This system can never work. Hundreds of ultrasounds are conducted each day. It is impossible to scan through the images stored in Silent Observer each day,” says Rizwan Parwez of the Centre for Advocacy and Research, a non-profit in Delhi.

Activists argue that the PCPNDT Act is strong enough and its better implementation, which includes timely auditing of Form F in which the doctor and the expectant parents declare that the sex of the foetus is not being disclosed through ultrasound, and filing cases against erring doctors, can reduce the number of sex selective abortions.