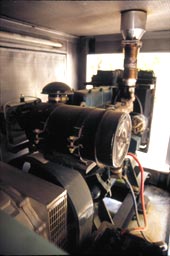 in a move that smacks of collusive manoeuvring by policymakers and the industry, diesel engine-driven agricultural pump sets have been exempted from the air emission standards notified by the Union ministry of environment and forests (mef) in May 2002. Known as the Environment (Protection) Second Amendment Rules, 2002, the final set of regulations for off-road diesel engines up to 800 kilowatts (kw) capacity has little in common with the technical committee's (tc) recommendations.

The Central Pollution Control Board (cpcb) had earlier set up the tc to suggest air emission norms for diesel engine-run generator sets (gensets) and agricultural pump sets. It is said that the suggested guidelines for the latter were dropped at the last moment, due to pressure from the small-sized diesel engine manufacturers.

Clearly, the ramifications of this move in the context of these engines entering the genset market on the sly have been glossed over. Another deviation is the relaxation of emission limits for small-sized diesel engines up to 50 kw capacity.

The mef, however, refuses to accept responsibility for toning down the standards. "The committee in its wisdom recommended the changes in the standards which were accepted by the mef," claims B V Subramaniam, director, mef. Chairperson of the tc, H B Mathur, on his part, contends that "even though the ministry has every right to change the committee's recommendations, it must also have the courage of conviction to own up to its actions".
What actually transpired, according to committee members, was that the small-sized diesel engine manufacturers approached the mef expressing their inability to implement such standards. Further, they warned the ministry that if these norms were thrust upon them, they would pass on the financial burden to the farmers.

"How could the committee recommend such stringent norms without consulting us? We have not even carried out test results and do not agree with the recommended norms," said S Mohindru, general manager, Usha International Limited, New Delhi. Mohindru is also a member of the Indian Diesel Engine Manufacturers Association (idema), which has several small-sized diesel engine makers as its constituents. "Any move to enforce standards would mean a jump in the cost of pump sets -- even as high as 100 per cent -- and the farmers would have to bear the brunt," contended Gurwinder Singh of Delhi-based Prince Generators, which makes small diesel engines.

These arguments appeared to have convinced Union minister for environment and forests T R Baalu. And the mef, which had by then forwarded the file pertaining to the notification, reportedly recalled it telling the tc to do a rethink. Subramaniam explains away the episode: "The manufacturers of diesel engines had some technical problems with the recommended standards and approached the mef. We then told the committee to further discuss the standards." He admits that the file in question was called back for possible discussions and modifications. The file had earlier been circulating between the cpcb, mef and the Union ministry of law, justice and company affairs from September 2001 to May 2002 -- a clear indicator of the indecisiveness that prevailed among the key players.

Experts contend that the mef, while mollycoddling the manufacturers, missed an important point: diesel engine-run agricultural pump sets are not used in rural India alone. They are also used on the outskirts of cities where they cause heavy pollution. However, since no studies have been conducted, it is difficult to quantify the problem, avers G K Mendiratta, environmental engineer, cpcb, and also a tc member.

"These small-sized diesel engines, widely used for running pump sets, are also capable of operating gensets," points out Mathur. "In fact, they are akin to the Peter engine introduced abroad 50 years back. Units that make these engines are located in cities such as Agra and Rajkot. Having undergone no design improvement in the past five decades, such machines are obsolete and highly polluting," he adds.

Meanwhile, the Union ministry of agriculture also sprang into action, alleges a committee member. It, too, is said to have pressured the cpcb not to notify the standards covering agricultural pump sets.

On March 11, 2002, the mef convened a meeting that was attended by its officials, members of the cpcb and tc, and representatives of idema. In an unprecedented move, the meeting was held on the mef's Paryavaran Bhawan premises under the chairpersonship of joint secretary C Viswanath. Previously, all tc meetings took place at the cpcb office and were chaired by Mathur. Manufacturers argued forcefully, but to its credit the tc stood its ground against any dilution. As per the minutes of the meeting, "the tc discussed the issue thoroughly but could not come to a consensus".

In April 2002, to break the deadlock the mef told the cpcb to take a final decision. It was then that the board suggested the withdrawal of an entire set of emission standards for diesel engine-driven agricultural pump sets, and also toned down norms for gensets up to 50 kw capacity. "Had we not taken such a step, the process of notification would have got delayed," says a board official. "To compensate for the dilution of standards for small-sized gensets, we have made emission norms for large-sized gensets more stringent," he adds.

It is, however, inexplicable that when the tc could refuse to go soft, why did the mef have to succumb to lobbying? "Why was the committee set up when priority had to be given to the interests of the industry? Why did the ministry waste the time of the technical experts?" asks a tc member. All attempts to contact cpcb chairperson D K Biswas to elicit a response in this regard proved futile.


The tc was set up in 2000, with its term ending in June 2002. It was an extension of the Mathur committee set up in 1997 to draft emission norms for gensets running on kerosene and petrol. The standards for kerosene and petrol sets were notified by the mef in 1999 as the Environment (Protection) (Second Amendment) Rules, 1999.

In the case of diesel engines since the variants used for gensets as well as agricultural pump sets are quite similar, the committee decided to recommend standards for both, reveals Mathur. Even though the formulation of the guidelines formally began in 2000, the cpcb had "told diesel engine manufacturers way back in 1997 to get their products tested at laboratories in the Pune-based Automotive Research Association of India (arai) and the Ahmednagar-based Vehicle Research Development Establishment", recounts Mendiratta. "Initially, they did not share their findings with us," he adds.

The small-sized diesel engine manufacturers were confident that they would not be covered under the rules, as any such move would affect the agriculture sector and the local market of gensets. But once the process got underway, they began to feel the heat. "The manufacturers participated in three meetings of the committee," reveals Mendiratta. "By September 2001, the tc had formulated the draft standards and by November the cpcb had forwarded the finalised version to the mef," he says.

After an assurance from the mef that the standards would be notified soon, the pil was disposed of in March 2002. This promise was only half kept in that though the regulations have been put in place, they are not in consonance with the recommendations.

l The norms were expected to be enforced from January 1, 2003, onwards. But manufacturers have got time till July 1, 2003, to comply with the rules

l Whereas the notification maintains the recommended standards for oxides of nitrogen (nox) and hydrocarbons (hc), those for carbon monoxide (co) and particulate matter (pm) have been changed. As per the suggested standards, diesel engines with a capacity up to 19 kw had an emission limit of 3.5 gramme per kilowatt hour (g/kw-hr) for co and 0.5 g/kw-hr for pm. But in the final notification, the emission standards are 5.0 g/kw-hr and 0.6 g/kw-hr, respectively.

In the end it boils down to the fact that the mef has let certain segments of the industry get away scot-free, most of the regulations are at variance with the experts' suggestions and a strong political flavour in the decision-making process has imparted a bad aftertaste to the episode. Small-sized diesel engine manufacturers -- especially those that make agricultural pump sets -- stand appeased, but at the cost of public health. And the mef has a whole lot of probing posers to answer. What remains to be seen is whether it will field the questions or, as is its wont, sidestep them.