A state in chaos

The human cost of the cyclone in Orissa is very high. So is the cost of the damage to the environment. The failure of the state machinery in handling this crisis is only going to make matters worse. At present, chaos reigns supreme in the affected areas

A state in chaos 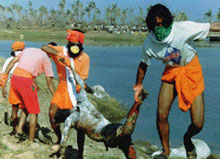 a month after the super cyclone, which left a trail of death and destruction in the Orissa coast, a nation watched in disbelief Orissa chief minister Giridhar Gamang saying: "We don't know what to do?" The same confusion grips the Central government machinery.

More than 11,000 people have lost their lives. This, many feel, may be an underestimation as rescue teams are yet to reach many of the affected villages. "We have at least 250 villages on the coastline, but we don't know their status," says an aide of the chief minister. Most of these villages -- 200 according to the government -- have been wiped off from the map and one-third of the state still remains submerged.

As the sea has ingressed 15 to 20 km into the land, preliminary estimates say 1.75 million hectares of the kharif crop has been damaged. Says C M Patnaik, director of environment, Orissa, "In all these districts, salinity was a problem and the recent submergence will aggravate the situation." However, the Union agriculture ministry has ruled out salinity affecting the land after testing samples from the affected districts.

Experts refuse to buy the Union government's statements. They feel future crops are also in jeopardy. "Salinity is definitely going to affect the agriculture for a longer period," says A T Ray, head of Orissa University of Agriculture and Technology's centre for drought management.

Parts of undivided Balasore, Cuttack, Ganjam and Puri districts have high salinity levels in their groundwater. With the recent sea ingression, Jaggatsinghpur and Kendrapara districts are also going to be badly affected. Besides, due to floods in all rivers flowing through these districts, vast areas of agricultural lands have been sandcast. Already under threat from siltation due to deforestation, the world-famous Chilika lake is another casualty of the cyclone (see box: Watered down ).

The immediate impact of the loss in crop has triggered migration of farmers and agricultural labourers. People from the affected areas are thronging urban areas of West Bengal and Bihar. "After the 1971 cyclone," reminicises D D Pradhan, Delhi-based Oriya community leader, "people from Kendrapara, most of them agricultural labourers and land owners, migrated in thousands to urban areas." He says this time, too, the affected people will do the same because crops have been badly damaged and it will take a long time for agricultural land to be cultivable.

In Paradip, release of ammonia into the air led to panic among the local people. The Paradip Phosphates Limited, a public sector undertaking, was forced to release ammonia when it could not get a generator to run its cooling plant. The godown of the company has also been badly damaged. According to eyewitnesses, a lot of fertilisers has mixed with the floodwaters. Local people say that contact with the floodwater near the plant results in skin disorders.
According to the World Meteorological Organisation, India accounts for six per cent of the total number of cyclones worldwide each year. China and Japan top with 30 per cent and usa accounts for 23 per cent. However, India reports the maximum damages. The us mainland was hit by a hurricane of the recent intensity (category-5) way back in 1969 but only 256 people died.

Lack of coastal management policies are responsible for this difference in the number of deaths, say coastal area management experts who met at a seminar organised by the Indian Council of Social Sciences in Delhi recently. The Vulnerability Atlas of India shows the Orissa coast as a high-cyclone prone area. Even Paradip port was never approved as a major port till some three decades ago. It was declared a state port, followed by its nomenclature as a major port in 1965, when Biju Patnaik took over as chief minister of Orissa in the 1960s. Disaster management plans were, of course, never put in place.

"There should be a proper coastal management plan like leaving sufficient space along the coastline for the sea's functioning," says John Pethick, professor of coastal sciences at the University of Newcastle, United Kingdom. However, says M Aba, director of the Centre for Earth Science Studies, Trivandrum, who was recently in Delhi to attend a workshop on coastal management, "Though the east coast is the most cyclone-prone coastal region in India, we are yet to form a cyclone management plan."

Kamal Nayan Kobra of the Delhi-based Indian Institute of Public Administration, feels, "Disaster management is atrociously bureaucratic in India." He calls for a rapid disaster assessment survey under which disaster-prone areas are mapped for a baseline data to be used in case of a disaster. "Disaster management is possible only when you have trained and specialised agencies to manage the crisis and there is a strong baseline data on the affected areas," he says.

R B Singh, convenor of the Disaster Studies Research Group of Delhi University's department of geography, sums it up: "We often forget that prevention is better than cure." Says Mihir R Bhatt, honorary director of the Disaster Mitigation Institute, Ahmedabad: "As a system of emergency management, we need to make more efforts to learn from each natural disaster" (see interview: When the government's emergency system fails, people learn for themselves ).

A cursory look at the activities of various meteorological offices' days before the calamity says it all. The Orissa Meteorological Department issued a warning on the afternoon of October 26 -- 48 hours before the cyclone. This was preceded by a warning issued by the Indian Meteorological Department ( imd ) on October 25. The state government alerted district magistrates and the Army. Some 150,000 people were evacuated. But the impression was that the cyclone would be of average intensity.

So, how does a cyclone of average intensity become a super cyclone? HEWilloughby of the Hurricane Research Division of the us National Oceanic and Atmospheric Administration's Atlantic Oceanographic and Meteorological Laboratory in Miami, Florida, has an explanation. Writing in the science journal Nature (Vol 401, p649), Willoughby gives the example of Hurricane Opal off the coast of Florida, which "turned into a forecaster's nightmare" on the night of October 3-4, 1995. In the case of Opal, a phenomenon known as 'rapid deepening' occurred -- the central, sea-level pressure fell suddenly as winds increased. "Rapid deepening is responsible for most typhoons and all Atlantic hurricanes with winds of greater than [180 km/hour]. Although only 20 per cent of hurricanes fall into this class, they cause 80 per cent of hurricane damage in the us . Moreover, the onset of rapid deepening is unpredictable -- it can change a category 2 hurricane into a category 4 or 5 hurricane (which is the severest) in less than a day. In other words, the intensities of the most damaging hurricanes are the most difficult to predict," writes Willoughby. "The thermodynamics of a hurricane can be modelled as an idealised heat engine, running between a warm heat reservoir -- the sea, at around 300K (26.85 c ) -- and a cold reservoir, 15-18 km up in the tropical troposphere, at about 200K (-73.15 c ). A hurricane's maximum intensity (that is, the strongest wind speed or lowest sea-level pressure) is proportional to the difference in absolute temperature between these two reservoirs," Willoughby adds.

Even imd officials explain that if the water temperature in the Bay of Bengal is more than 26 c , a normal cyclone can become ferocious. In the case of the Orissa super cyclone, the temperature was 26.5 c and the state government was told about the imminent super cyclone only around 5.30 am on October 29. However, there was no radio network in the coastal districts, and it was impossible to relay the warning. The rest is history.