A global tax regulatory body to finance the SDGs could have rescued the international conference in Addis Ababa. But the culture of privilege once again won over the culture of equality

Even as the United Nations’ Millennium Development Goals (MDGs) are set to be replaced by the Sustainable Development Goals (SDGs) in September this year, the critical question as to how to finance the global development agenda for the next 15 years was deliberated at the third international conference on Financing for Development (FfD), held during July 13-16, 2015, in Addis Ababa, Ethiopia. The Indian delegation was led by Jayant Sinha, minister of state for finance.

Similar to MDGs, SDGs would require robust financing. The UN estimates that the new programme would cost US $11.5 trillion per annum, or $172.5 trillion till 2030. But the yearly investment in infrastructure—water, agriculture, telecom, power, transport, buildings, industrial and forestry sectors—amounts to only $5-7 trillion globally. Developing countries would need an investment of $3.3-4.5 trillion annually, while the current investment is just $1.4 trillion, estimates the UN Conference on Trade And Development.

The agreed outcome of the four-day meet is the Addis Ababa Action Agenda (AAAA). It underlines more than 100 measures to generate pledges (voluntary and mandatory) and investments for tackling a range of economic, social and environmental challenges for the post-2015 development framework. Developed countries re-committed to achieve the target of 0.7 per cent of their gross national income as funds for official development assistance (ODA). The role of the private sector in development financing and implementation was also emphasised. New initiatives aimed at implementing the SDG agenda were announced after deliberations through six multi-stakeholder roundtable meetings and almost 200 side events. Three such initiatives were on taxes—Tax Inspectors Without Borders, Addis Tax Initiative, where 18 developed countries pledged to double ODA for tax capacity, and a joint initiative of the World Bank and the International Monetary Fund. A regional network of Asian tax administrators was also formed to check tax evasion and raise domestic resources to finance development.

National, regional and multilateral development banks pledged to provide hundreds of billions of dollars to finance infrastructure and small and medium enterprises. Social needs were also high on the agenda. New financing partnerships were formed to tackle health and nutrition problems. These include a Global Financing Facility for women’s and children’s health; a $2.5 billion fund by the Bill and Melinda Gates Foundation and the Islamic Development Bank, and UNITLIFE, a financing mechanism towards nutrition intervention in Africa. Initiatives to increase access to renewable energy were also announced.

The UN hails AAAA as a historic deal that provides the foundation for implementing SDGs. But differences of opinion have surfaced between developed and developing nations over the outcome of AAAA.

While the 34 member states of the Organization for Economic Cooperation and Development (OECD) hailed the outcome, most developing countries and tax campaigners were left disappointed. Despite the three initiatives on taxes, the menace of tax evasion—the biggest dodgers belong to the rich countries—was not deliberated upon extensively. FfD was an opportunity to democratise the global tax regime. But a global tax body with equal representation is still many negotiations away. The US, Japan, the European Union (EU), Australia, Canada and all OECD members played hardball at every step. These countries did not commit additional finance, but supported an OECD-led global tax body.

Civil society members hailed India’s leadership role on the issue of taxation. India advocated a global regulatory body under the aegis of the UN with the representation of developing countries at the tax reform table. This was the common position of the G-77 countries. While negotiations on a tax body went down to the wire, India and Uruguay held ground, even when Brazil and South Africa gave in. Sinha said that a UN tax body with governmental and geographical representation would challenge the hegemony of the EU and rich nations like the US.

Considering the wheeling and dealing of the EU in blocking developing countries’ demand for a global tax body, it was not surprising that this happened a week after the Greek referendum and when the Greek bailout package was being discussed in Brussels at the headquarters of the European Commission (EC). Greece did not have an independent stance at the FfD negotiations since EC was the spokesperson for the European block. Interestingly, the same EC which Greece threatened with exit was representing Greek interests. The Greek tragedy is a reminder of the change needed in the global financial structure. FfD was the perfect opportunity to make ambitious beginnings. Alas, it was an opportunity missed, thanks to the obduracy of the rich countries’ block, led by the EU, the US and Japan.

Why India is not happy

The trend of declaring success at global summits has created a new breed of myth-peddlers who can create a successful narrative from the most disappointing events. Copenhagen Conference of Parties (CoP), Durban CoP and Lima CoP had their share of such spin doctors, and FfD has a similar story. But Indian trade analysts and experts have made their displeasure known.

Lakshmi Vaidyanathan, regional secretary, Asia Pacific, Public Services International (PSI), a non-profit, says, “It is deeply disappointing that the outcome of the FfD conference continues the trend of handing over responsibility of development finance to the private sector.” About 150 organisations demanded the exclusion of essential services like health, education, water and sanitation from public-private partnerships and private sector financing. We believe taxes are the most important source of government revenue to implement public policies to redistribute wealth, realise human rights, achieve equality and strengthen governance and accountability, says Vaidyanathan. With increasing wealth and the dominant role of Indian and foreign Transnational Corporations (TNCs), mobilising public finance through taxation is a realistic option in India, though not the preferred one since the dominance of TNCs gives them the upper hand to lobby for tax exemption. Nevertheless, the mobilisation agenda goes hand in hand with shifting tax matters from OECD to the UN, she adds. 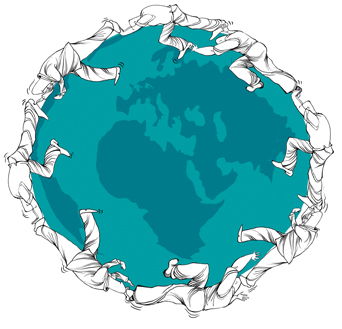 Amitabh Behar, co-chair, Global Call to Action against Poverty, is equally disappointed. His core concern is the freezing of the development assistance at 0.7 per cent of the gross national income of the rich countries even as the world is encountering more acute challenges, such as natural and human-made disasters and climate adaptation. He, however, says that the hard push given by the G-77 countries for a global tax body instills hope that global negotiations will see a confident South taking on the rich North in the new world order.

The only consensus that emerged in Addis Ababa between the global South and the North is that the deal is disappointing. It lacks ambition and perpetuates glaring oversights. This is best manifested in the over-presence of the private sector and blended finance, where the public pays and the private sector profits. AAAA ignores the importance of market regulation and the centrality of state when it comes to essential services like health and education. It is based on naive assumptions of equal benefits by all countries with barrier-free and quota-free trade. This naivety is dangerous considering how badly rules are rigged in trade agreements in favour of the rich and corporates.

The social dialogue deficit is as much a concern. Trade unions appreciate the mention of “Decent Work” and “Social Protection Systems”, but complain that important linkages with domestic resource mobilisation have not been recognised and maintained. Neither “social dialogue” nor the role of social partners has been mentioned in the agenda. This demonstrates a failure to recognise rights-based means for development.

The Women’s Working Group on FfD, a women’s advocacy group giving a feminist perspective to the deliberations, has also expressed disappointment about the instrumentalisation reflected in the language of AAAA when it addresses women’s issues. The group alleges that gender-sensitive policies and actions are in the agenda text not for justice and human rights reasons but for smart economics. While AAAA reiterates the need for gender mainstreaming, including targeted actions and investments, “the reference to women and to financing gender equality and women’s empowerment as a means to achieve economic growth stems from the commodification of women as vital to enhance economic growth and productivity rather than from the obligation of fulfilling women’s human rights,” says Rosa Lizarde, one of the coordinators of the group.

What was worse was the duplicity of the developed world. While they signed up to an ambitious development agenda, they refused to invest money and insisted on financing development through domestic revenue streams. ODA globally is $135 billion, but the UN estimates that the tax revenue lost by the poor countries due to tax evasion is over $300 billion annually. So the importance of tax revenue far exceeds the potential of ODA to usher in development.

Equality is the key

Global cooperation is needed to combat tax evasion and to eliminate illicit financial flows. This calls for a tax regulatory body where the poor and middle-income developing countries sit on the same table as the rich. AAAA declares the setting up of a UN expert committee whose members will be chosen by the Secretary-General from all the UN member states. This gives hope to the developing countries, but it is anybody’s guess as to who will control the wheel.

The International Trade Union Confederation notes that to make FfD a success, a shift from the culture of privilege to the culture of equality is needed. While AAAA aimed to leave no one behind, it only succeeded in perpetuating the exclusion of poor countries.

As AAAA has not added ODA commitments and the pledges of some private foundations, the total figures are woefully short of the amount needed to achieve SDGs. Tax, a fair financial framework to reduce poverty, is at the heart of these sustainable goals. AAAA was a missed opportunity; nonetheless campaigners are motivated with the passion and leadership of G-77 nations to challenge the financial status quo. One can only hope that this leadership delivers for the global good.

The writer works on poverty, public policy and citizen-state engagement