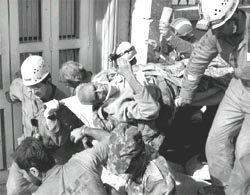 promises by politicians seem to be the only 'relief' for the survivors of quake-ravaged Gujarat, even as the region continues to be rocked by aftershocks. "The Union government would ensure that life after the calamity is better than the life before," assured the prime minister. But even after one month, since the earthquake struck in the wee hours of January 26, life doesn't seem to be heading anywhere for the survivors. Though relief has poured in plenty, transparency in the management of relief is missing. The system seems to be in a pathological inertia.

Remote areas in Bhuj are yet to be connected and rescue operation is just beginning in some areas. The death toll is rising, but the government has stopped counting. "The harm caused by the earthquake is a question of the mind and the mindset. The mind that attempts to study the seismic waves in the interest of humanity and the mindset which built houses flouting all safety norms," says R A Mashelkar, director general, Council of Scientific and Industrial Research, New Delhi.

Within a fortnight of the calamity, around 55 cases were lodged against builders in Gujarat. In Ahmedabad, the police received some 10,000 complains. One ngo has appealed in the Gujarat high court to make earthquake-resistant features mandatory in building designs. Similar appeals are pending in the Delhi high court and the Supreme Court.

In the face of biggest human tragedy, the crisis management has become a major exercise in crisis cover-up. On one hand, the state government has decided to set up a permanent disaster management centre and on the other, many state ministers -- having a nexus with shoddy builders -- are undertaking a massive cover-up operation to shield the guilty. It is reported that local authorities in Ahmedabad have ordered a quick clearance of all collapsed buildings to protect the builders in the legal battle. In Bhuj, builders are now claiming that local bodies never enforced the building codes.

Meanwhile, the first meeting of the newly-constituted National Committee on Disaster Management became a mutual admiration club: the state government got kudos for 'effective crisis management' and in return, the state government appreciated the Union government for its 'sensitive response'. This committee, which is headed by the prime minister, deliberated for three hours and let loose a chain of committees to tackle natural calamities in the future. A working group was formed which would form a task force for preparing long-term planning for natural calamities like flood and earthquake. Sources say that at least nine task forces would be set up. After these task forces give their recommendations, the working group would recommend long-term plans, which the national committee would go through. Interestingly, after the Chamoli earthquake a similar initiative was taken and a central committee formed to look into disaster management. But nobody knows about the fate of this committee.

Now, the government has decided to modify the seismic map of India. A similar effort was proposed after the Jabalpur earthquake. But it is yet to see the light of day.