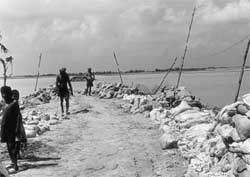 It is well-known that it is very easy to siphon off funds from earthwork projects, says D K Mishra. Perhaps this was the reason why politicians in the 1950s pushed hard for embankments to be built along rivers in Bihar. The money siphoned off from such projects was used to fund political activity, alleges Hemant. " Uttar Bihar me agar barh na aye to poore Bihar ke rajniti me sookha pad jata tha" (If floods did not visit north Bihar, there would be a drought in Bihar politics), he says. Embankment projects are so lucrative that it even forces politicians from the same parties to raise their voice against each other, says Ranjeev, a resident of Patna.

"Building embankments is a safe way to be corrupt," says Vishwa Ranjan, chief of Intelligence Bureau, Patna, Bihar. "There are so many loopholes that they can be easily exploited," he points out.

However, politicians did not realise that they had opened up a Pandora's box.They failed to foresee that corruption in the management of the environment would eventually corrupt the entire society and place the funding of political activity in the hands of criminals. It was not long before criminals followed contractors into the lucrative activity of building and repairing embankments.

Ranjeev makes a startling disclosure. "Nearly 25 per cent of the people living in Gangajali Muhalla in Saharsa district are contractors who have constructed their houses using bricks taken from the Kosi project," he alleges.

Today, criminals have taken control of the contracts given for construction of embankments. They have also become fund-raisers for political parties, politicians and the rulers of the state. As the Bihar government is now short of funds, it has shelved plans to build embankments. At present, the state government is concentrating only on maintenance of the existing structures. Surprisingly, when he came to power, Laloo Prasad Yadav, ordered that the maintenance of earthworks would be done by the government. From 1990 to 1999, the government spent around Rs 270 crore on this alone. Flood-related damages also skyrocketed during this period.

Shradhanand, formerly a journalist from Aryavrata, a Hindi newspaper published from Patna, lives in Nauhatta, a small town in Saharsa district. He alleges that most contractors have criminal cases pending against them.

Politicians and engineers, who began the work on the embankments, were fully aware of the cost of projects and the heavy cuts involved in earthworks. "L N Mishra was the main fund-raiser for his party," says Ajit Kumar Jha, resident editor of The Times of India , Patna.

Ramchandra Khan, inspector general of police (prosecution), Patna, feels that the primary work of the bss was to get contracts by bribing engineers, distribute the work and take a commission. It was only a matter of time when this would erode the moral fabric of society and that of the officials who obeyed those who ran the government. The bureaucracy in Bihar was submerged and overwhelmed by this deluge, which brought in its wake a flood of opportunity to make money, he says.

The malaise is deep-rooted today. The 1997 report of the Comptroller and Auditor General ( cag ) of India, questions many of the practices involved in flood control measures. For instance, during 1992-96, the maintenance of embankments before the flood season was not adequate as per the recommendation of technical advisory committees. "In disregard of the departmental orders, anti-erosion flood fighting works (mainly maintenance of embankments), valued at Rs 39.05 lakh, were done on the basis of handwritten receipts from 1992-93 to 1996-97 in four divisions. These were the flood control division Thakraha, eastern embankment division Birpur, flood control division 1 and 3 Madhubani at Padrauna," says the report.

According to a Housing and Urban Development Corporation official at Patna, corruption is so rampant in the system that some bureaucrats are apprehensive of coming up with projects as they fear that politicians may immediately demand a 40 per cent cut. And since the cut is so high, contractors manage to get paid even without executing any work, all they do is give the cut in advance. The project is thus executed on paper.

For example, the cag report states that the "supply of 7,673.7 cubic metres of boulders (valued at Rs 31.98 lakh) at Nehru Park (Nepal) in the Birpur Division was doubtful, as there was no evidence of it being lifted from the quarries." Further, despite an expenditure of Rs 36.13 crore on two drainage schemes in the Gandak and Kosi command areas, no submerged area was rid of waterlogging. The amount was mainly spent on establishment costs of two drainage schemes.

Sometimes, engineers and contractors create projects. In normal cases, engineers are supposed to submit a plan before starting a project. The technical advisory committees and other high-level committees from the Flood Control Department visit the site where the work is to be executed. They review the plan and then give clearance for the project. Thereafter, the government notifies the plan and the work starts, says Ashwini Kumar Sinha, executive engineer, Eastern Embankment Division, Birpur. Then it is possible to start the loot of government resources in the name of construction and maintenance of embankments. The supply of boulders has tremendous potential for corruption. "Sometimes, contractors show on paper that they have delivered boulders at the site, and get their payments," says Vijay Babara, a journalist from Nauhatta.

In some areas of the Kosi region, contractors are in cahoots with criminals, says Shradhanand. After the contractors deposit the construction material at the site, these criminals come in boats and decamp with it. Later, the same material is delivered to another site for some other project, adds Babara. In certain circumstances, engineers make money by compromising on quality and quantity of raw materials. Sometimes they forge bills and make payments for material which has not been supplied. Says Shradhanand, "Contractors and engineers keep only 15-20 sandbags in a nylon crating, which is used to bolster the embankment instead of a minimum of 25. They show that the other bags have been washed away by the river."

"In the past, the government initiated several probes against engineers. But these have proved futile. No action is taken in most cases," says S N Jha, former engineer-in-chief, wrd , Bihar. "Contractors and engineers can also make money while raising the height of embankments by piling on loose earth or getting funds passed for projects that have not been executed at all." Embankments, however, are not the only source of making money today. The loot of the state treasury has started taking place on all fronts. As a result, several former ministers and two former chief ministers -- Jagannath Mishra and Laloo Prasad Yadav -- stand accused by the cbi in the infamous fodder scam (see box: Facing charges ).

The joint director of Central Bureau of Investigation ( cbi), U N Biswas, is of the view that the money generated by politicians in the fodder scam helped Laloo Yadav to come to power. The practice of corruption which was initiated during the 1950s has today become institutionalised in Bihar. Politicians have created a Frankenstein they can no longer control.