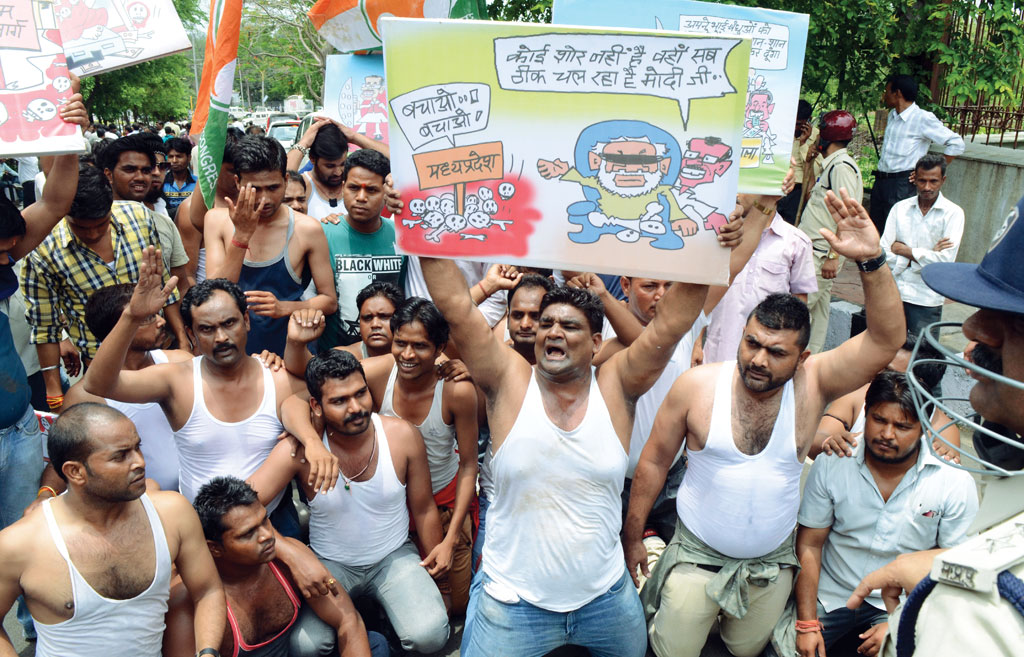 Rohan Singh (name changed), a resident of Hoshangabad district in Madhya Pradesh, dedicated 16-17 hours every day on studies. His goal was to get admission into a government medical college. He attempted the test for three consecutive years, but failed to make it by two to three marks each time. His father had spent Rs 4 lakh on his coaching, and was unable to afford the fees of a private medical college. That was eight years ago. Today, Singh works as a medical representative in Hoshangabad. He feels cheated and says he deserved a chance to be a doctor.

Madhu Kumar (name changed) has a similar story. She too appeared for the entrance exam in 2011. She missed the cut-off mark for government medical colleges by two marks, but was eligible for admission in private colleges. She was called for counselling to the Gandhi Medical College, Bhopal. As she waited for her turn, the counselling process stopped abruptly. After six hours when it resumed, Kumar was told that all the seats had been filled. As she was returning with a heavy heart, she was approached by strangers who assured her of a seat in a private medical college. The cost of admission varied between Rs 17 lakh and Rs 90 lakh. Kumar declined the offer. 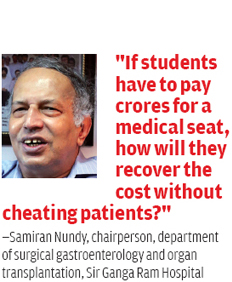 Singh and Kumar are among thousands of aspirants who unsuccessfully tried their luck to become a doctor through the Madhya Pradesh Vyavasayik Pareeksha Mandal, commonly known as Vyapam. It is a self-financed and autonomous body created by the Madhya Pradesh government to conduct entrance examination for professional courses. But as it has turned out, Vyapam has become a showcase for corruption in medical education.

Irregularities in the admission procedure for medical entrance examination conducted by Vyapam were first reported in the mid 1990s. Numerous complaints of corruption surfaced in the conduct of the pre-medical test in 2009. In 2011, the state government claimed to have traced 114 cases of corruption in Vyapam. In 2013, the state police busted a gang involved in the scam in Indore and arrested 413 people. Further investigations revealed a nexus between candidates, politicians and Vyapam officials (through brokers). Such instances explain the fate of deserving but unsuccessful students like Singh and Kumar.

By June 2015, about 1,800 people, including former state education minister Laxmikant Sharma, were arrested. About 600 suspects are absconding, while 48 persons associated with the case have died under mysterious circumstances. This includes the dean of Jabalpur Medical College and the son of Madhya Pradesh governor, Ram Naresh Yadav. The Central Bureau of Investigation, which is now handling the investigation, has already set up 14 inquiries.

As Vyapam made headlines, Down To Earth launched its own investigation to understand the scam. We learnt that Vyapam is not an isolated case of corruption in a professional examination board in just one state. An analysis of news reports throws up numerous cases across the country that reveal a criminal nexus running deep in India’s medical and technical education system, involving politicians and bureaucrats to officers in educational institutions. The rot is more visible in medical education (see ‘Bleeding the system... ’,).

In 2010, the daughter of a minister in Jammu and Kashmir was found using an imposter in the state medical exam. The crime branch of Jammu and Kashmir police reportedly unearthed a multi-million rupees scam in 2013, where Mushtaq Ahmad Peer, former chief of the Board of Professional Entrance Examinations, was arrested for selling question papers of the state medical entrance examination to candidates.

That year, a national television channel also reported that brokers took money from candidates to guarantee a seat through the National Eligibility and Entrance Test (NEET). The then Union health minister, Ghulam Nabi Azad, admitted that there was corruption in medical entrance examinations, which is why the government had introduced NEET for all medical colleges in the country. But this model of examination has clearly failed to check corruption. This year, the All-India Pre-Medical and Pre-Dental Entrance Test (AIPMT) was cancelled after candidates were found using gadgets, including mobile phones, in the examination hall to pass on questions to accomplices waiting outside the hall in Haryana.

Cycle of cost and corruption

Radha Vishwanathan, senior fellow at the Observer Research Foundation (OBF), a Delhi-based think tank, writes, “The ‘capitation’ fee or bribe as a precondition for admission is an astronomical sum, which far exceeds the earning capacity of fresh pass-outs from medical colleges. It paves the way for the practice of ‘medicine for maximum profit’ in urban areas.”

Health activists attribute the unnecessary premium on the seats in medical colleges to a shortage of such institutions. For AIPMT 2015, about 617,000 candidates took the entrance test for just 3,500 seats. Data of the Medical Council of India (MCI) shows that medical colleges in the country have increased over the years, but the scales of growth have been in the favour of private colleges, which charge exorbitant fees (see ‘Surgical rise’,).

The annual report of the Ministry of Health and Family Welfare, 2013-14, says there were 387 medical colleges in the country two years ago, out of which 181 were government colleges and 206 were private colleges. The combined annual admission capacity was 51,979 seats for MBBS. The government ordered the setting up of 25 new medical colleges for the academic year 2013-14. Today, there are 412 medical colleges in India, including 190 government and 222 private, with a total of 56,350 MBBS seats. 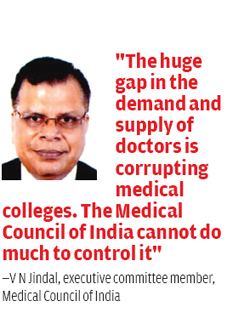 But the number of medical seats to churn out doctors is not proportionate to the demand for doctors. A High-Level Expert Group (HLEG), set up by the erstwhile Planning Commission in 2011 on the universal health coverage for India, highlighted the huge gap—0.5 doctors per 1,000 population. It recommended that India should meet the standard of one doctor per 1,000 population, as prescribed by the World Health Organization.

V N Jindal, executive committee member at MCI, says the huge gap in the demand and supply of doctors is corrupting medical colleges.

There are significant perks associated with being a doctor. “People are ready to put in any amount for a doctor’s degree as they take it as an investment and expect huge returns,” says Amit Sengupta, a public health activist. But he challenges the demand- supply hypothesis. He cites the example of Thailand, which has performed better on health indicators with lesser number of doctors than India; Thailand has a high number of health workers instead. 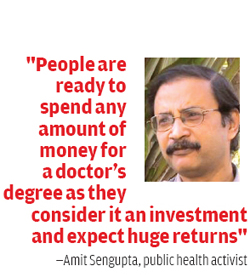 Samiran Nundy, chairperson of the department of surgical gastroenterology and organ transplantation at Sir Ganga Ram Hospital, New Delhi, says that less number of doctors does not mean corrupt doctors.

According to Jindal, MCI does not have the power to punish the corrupt in medical practice as it is a monitoring body. “There are two ways to control corruption in medical education: either the government lowers the eligibility criteria for doctors, which is unhealthy, or it opens up more government colleges,” he says. Nundy notes that corruption in medical education prevails because there is no regulation, monitoring and punishment for people indulging in malpractices. Which is why honest aspirants like Singh and Kumar have to bite the dust.