From planting trees in his arid homeland to trapping water, this former textile dealer shows the way 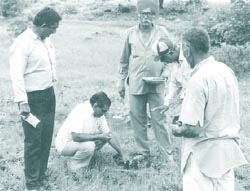 for Premjibhai Patel, the title ganda bapa (crazy old man) fails to work as a deterent in pursuing his zeal for trapping much-needed water and restoring the depleted forest cover around his hometown in Gujarat.

In his 60s, Patel is also known as vriksh premi (tree-lover). He abandoned his profession as textile distributor in Mumbai and returned to his village Bhayavadar in the state's Upleta taluka to help his people. His decision, to some extent, was prompted by his disillusionment with the frenetic pace of life in the metroplis and his inability "to fit in".

Upleta falls in the arid belt, and the forest cover -- consisting mainly of ganda baval ( Proposis juliflora ) -- was disappearing at an alarming rate due to extensive felling by villagers for fuelwood. Initially, he went around supporting plantation activities of other groups. Later, he chose an area around temples to plant saplings and urged the people to look after the trees. Neighbours found his activities a bit queer because he had given up a comfortable lifestyle.

Wanting to diversify in 1984, he entrusted the task of monitoring the tree-planting activity to Gokul Gosadan, a voluntary organisation that mainly looks after cattle. Three years later he decided to switch to sowing seeds which he managed to acquire from south India.

With encouraging feedback from the temple tree plantation programme, he realised it was important to motivate the people to expand the scope of his work. Once the people noticed that the programme was progressing satisfactorily, they were eager to join provided they were given the seeds. He soon procured 475 tonnes of seeds and the people went to work with all earnestness. Patel says, "The entire project was financially supported by me and my son. Despite controversies regarding the choice of plants, I stuck to my stand and proved the sceptics wrong." These days he is not directly involved in the planting of trees as most of his time is taken up in Upleta where he is helping people construct check dams.

The writer is a freelance journalist from Vadodara