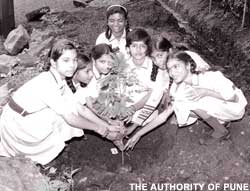 Pune has been the centre of a quiet revolution. Heading this transformation is the Tree Authority of Pune (tap), part of the Pune Municipal Corporation's garden department. tap is responsible for keeping Pune city, with a population of over 26 lakh, lush and green.

Maharashtra was the first, and until recently the only, state to make it mandatory for urban municipal bodies to constitute a tree authority that would oversee governance and preservation of the green cover in urban areas. Established under the auspices of the Maharashtra (Urban Areas) Preservation of Trees Act of 1975 (the Act), tap is concertedly working to mark Pune -- currently the fourth-most green city -- as the greenest city in the country. No mean task in the face of increasing urbanisation and ever-swelling demands for wider roads and more urban construction.

The Act vests tap with wide-reaching powers to impose fines and penalties, and even take legal action against offenders. An example: it is a criminal offence to cut, or even substantially prune, trees without permission from tap . This rule has come to take on a rather radically progressive colour, working on the principle that while land could be private property, trees are public goods. The rationale being that damage to trees damages the collective environment. Not long back, tap had taken Fergusson College to court for illegally felling 18 trees from its botanical garden.

There is an elaborate system to assess every request for felling trees on a case-by-case basis. Most of these applications are for widening roads or for construction purposes. tap inspectors evaluate the site before permission for felling trees is granted. Assistant Garden Superintendent B G Mane says that tap processes approximately 100 such applications a month, involving roughly 300-400 trees, mostly applications for road widening or construction purposes.

tap attempts to come up with viable alternatives in these cases. In a recent road widening case, most trees along the road were transplanted, with a survival rate of about 80 per cent. Similarly, completion certificates for new constructions are obtained only if tap is satisfied that there are five trees for every 0.03-0.04 ha. It is also mandatory that three saplings are raised for every tree felled.

tap has assumed a proactive role in its activities. Massive tree plantation drives during the monsoons, which roped in schools, clubs and international bodies, have seen the planting of about one lakh saplings, 70-80 per cent of which have survived. A tap -run nursery gives out free saplings during such drives. The initiation of an annual award, called the 'Harit Pune Puruskar' (Green Pune Award), encourages individuals, corporations and organisations to actively contribute to the preservation and spread of Pune's green cover.

The eco-restoration and city beautification projects are proof that tap is not literal in its understanding of what its responsibilities entail. In coordination with environmental non-governmental organisations (ngos), tap has been planting trees that attract butterflies and birds, such as butea, fig, custard apple, in a bid to preserve the biodiversity of the city. Interestingly, this process has also attracted butterflies (like the blue mormone, a western ghat dweller) not native to the city. There are also reports about the reappearance of tree frogs.

The city beautification project has already transformed the Mutha river bed from a stinking garbage dump to a landscaped garden. The Mutha project involves cleaning, channeling and greening of the river bed. In one year of the project's existence, it has already planted over 67,000 trees that grow well on the marshy terrain.

tap carries out a tree census once every five years. The 1997 census of trees under tap 's jurisdiction puts the number of fruit-bearing trees at over 15 lakh, and ornamental trees at over 31 lakh. The next census is scheduled for April 2002. With the Maharashtra government sanctioning Rs 3.14 lakh for the greening of Pune, one hopes the coming census will see the tap counting twice as many trees as the 1997 census.