Traditional tea cultivation in China's Jinuoshan area, unlike in most other places, ensures ecological balance 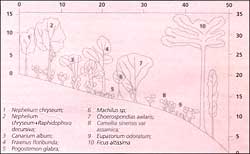 IMAGINE a tea garden which resembles a dense forest. Animals abound, sacred fig trees bloom, and water is aplenty. This is Jinuoshan, a hilly region in China's South Yunan district. The Jinuo, China's smallest ethnic group, with a population of 18,000, cultivate the broadleaf Pu'er tea, Carnellis sininsis var assamica Kitamura, using traditional knowledge stretching back to 1200 years. And these techniques have enriched the forests and the people.

In India, tea gardens were formed by deforesting hills, but in the Jinuoshan region tea seedlings are planted in a natural forest. Therefore, the traditional tea garden of Jinuo is a kind of semi-artificial ecosystem. By weakening wind force, absorbing carbon-dioxide and generating oxygen and fog, the gardens create a congenial micro-environment for local dwellers.

In Jinuoshan, there is no definite criteria for selecting land for establishing a tea garden. But it is usually near the village of the owner. The incline varies between 15' and 42o, but there is no soil erosion. This is because of a rational plant structure which takes away the direct pressure from rainfall and wind on the ground surfaces.

The discovery of tea is shrouded in myth, but Pu'er tea originated from 10 17 Yibang, a small prosperous village just 30 kilometres from Jinuoshan. The scholar Lu Yu, author of the Chinese book on tea, "Tai Ching" (circa AD 700), tracesthe history of tea cultivation to AD 618, the period of the Tang dynasty.

Lu Yu talks about the extremely evil and cruel eruppror Wan Tu who was AW*Y&rf@hWu overthrown by his first minister and banished to remote Jinuoshan in south China. Shorn of power and wealth, the distraught Wan Tu sat under a tree, poplotting revenge. He was left with the sole succour of the poor of the then "Central Empire", Chung Kuo, or China: drinking hot water. One day, however, some leaves from the bush fell into his saucepan of boiling water, and he discovered to his delight that the brew was tasty, refreshing and relaxing. He named the leaves Tai, that is, peace. He spent 7 years under the tree, reforming himself, aided by the magical effects of Tai. He returned to his kingdom a changed man and eventually, once again as ruler, he spread the good word about tea.

Whatever the truth behind this legend, the original tea producers selected Jinuoshan as the best place to grow tea. Jinuoshan's altitude varies from 550 to 1,691 metres. It has a temperate climate and abundant rainfall. Vegetation here con- sists of monsoon rain forests, evergreen broadleaf forests and bamboo forests.

Today, tea is the 3rd most important crop of this region After cardamom and rubber. Fresh tea harvested by the owners of traditional tea gardens is only 600-1300 kg per hectare every year, bringing in $355 per hectare. In contrast, an Indian tea garden in Assam yields approximately 1500 kg per hectare. But Jinuoshan's low yields are offset by returns from the forest- food, fodder, rattan and fuelwood.

I Tea, in one sense, being black gold, triggers off possessiveness in the owners. It became private property right from the start. The Jinuo share food, tobacco, tools and forests, but never their tea plants.
The Jinuo practice shifting cultivation, supplemented by hunting and gathering. For them every thing has a soul and a spirit. Animals, plants, mountains and forests are revered. The fig tree is considered s4@red. King-sized fig trees with stems as of the unique Jinuoshan garden system big as 2 10 cm still survive here. This has a direct bearing on the ecology. The trees help conserve water. The tea gardens are set up above the villages, and all the water used by the people, the domestic animals and in the fields, come from the gardens through drains and bamboo passage ways made by the villagers.

Trees are arranged in 3 vertical layers. The 1st layer is of shade trees (Mangifera spp, Nephelium chryseum, Pouteria grandiflora, Canarium album and Ficus altissima), crucial for ensuring adequate humidity for the tea trees, which determines the yield and quality of the tea. Around 30 per cent of shade is ideal. Tea trees can withstand frost, but temperatures below 5 C cause slight damage. The canopy is as high as 20-35 meters and provides 25 per cent shade.

The 2nd layer -- predominantly of Pogostemon glabra -- stands at about 1.5-8 meters. These are mostly tea trees and young trees of the canopy layer. The coverage occupies almost 35 per cent of the ground surface and, together with the canopy layer, provide 28 to 40 per cent shade. The tea trees normally measure 20 cm in diameter and 3 meters in height. The 3rd layer, mostly grasses, shrubs and seedlings, is lower than 1.5 meters. There are numerous epiphytes and climbers which depend upon the shade trees and tea trees.

Jinuo elders say that nobody manages the traditional tea garden, and that tea is just harvested. But tea trees can grow up to 10 meters high, and picking the leaves becomes almost impossible. Farmers, therefore, prune the trees macroscopically. Tools are not used. If the tree is higher than 1 meter, the farmers spread out the branches horizontally by turning, pulling and pressing them. This damages the trees slightly. But they self-cure themselves within 2 to 3 weeks.

Picking stimulates the sprouting of tea buds, increasing the yield. The owners harvest tea 2-3 times every year. If the buds and young leaves are less than usual the tea pickers will remove some small branches and old leaves deliberately in order to improve bud sprouting in the next season.

The Jinuo do not use fertilizers or pesticides, fearing that these will spoil the flavour. Plant illnesses rarely occur. The harmful insects are removed. Abundant litter from the old trees that are retained keeps the soil fertile. But sometimes the old trees can't sprout young buds and leaves. These are reformed by being cut down, with the trunk being retained up to a height of 50-80 cm. Normally, dozens of young branches flower from this old trunk in a year's time. The reformed tree can be harvested in 2-3 years.

The Jinuo follow a philosophy of conservation. Their approach is holistic. Big trees will destroy tea trees if they are felled and tea trees need big trees for shade. There is a cycle of dependance, they say. Thanks to tradition, Jinuoshan's tea gardens conserve biodiversity. And they have become a landmark in the area.