With innovative use of space, people in cities are reclaiming their right to safe food 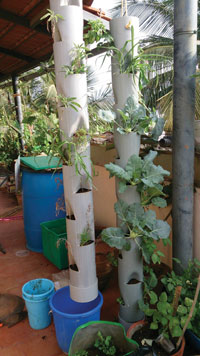 Sky is the limit for those who want to grow their own food, both literally and metaphorically. An increasing number of households in land-crunched cities are transforming the much-neglected terraces and rooftops, which were once best used for storing junk, into havens of beauty, greenery and food. In fact, they are innovating ways to use every inch of this space for reclaiming their right to safe, organic food; creative occupation; and pleasant surroundings.

Though there is no estimate for how many people are engaged in such activities, a Facebook group, Organic Terrace Gardening, has 19,000 members from across the country. Be it metropolises like Delhi, Mumbai, Hyderabad and Chennai or small cities like Nashik and Nagpur, people are forming gardening groups to learn from each other. The movement has caught on well in Bengaluru, which has an estimated 7,000 terrace or rooftop gardens. Everyone has a different reason for taking to terrace gardening. In Bengaluru, homemaker and composting enthusiast Vani Murthy found more compost on hand than she could give away, and she filled her terrace with planting pots.

Hariram P S, an Information Technology professional, created a garden as part of his effort to help his two sons reconnect with nature. “We work together, making a greenhouse, taking care of plants and watching them grow. It has also brought us closer,” Hariram says. Preeti Patil, caterer with the Port Trust of India in Mumbai, started growing fruit trees on her 3,000 sq ft terrace while trying to deal with her kitchen waste. Now she has a whopping 150 fruit trees—all yielding.

But space is not a constraint for those who do not have access to such sprawling terraces or rooftops. Plant enthusiasts are creating mini-gardens even on their windowsills. After all, innovative use of space is the rule of the game. Christopher Pereira of Mumbai has designed a two-storey vertical garden using pvc pipes. He has also designed a pvc pipe micro-garden that can be hung horizontally from window-grills and used to grow greens like fenugreek, spinach and amaranths, herbs like wheat-grass and mint or even the exotic rosemary and thyme.

Soil is another important area of innovation. Says B N Vishwanath, “Conventionally, a mixture of 50 per cent soil, 20 per cent sand and 30 per cent compost is considered the ideal potting medium. But weight matters when one grows food in balconies and terraces. So we have developed a light-weight medium that comprises 25 per cent each of soil, coco-peat, compost and vermicompost.” Vishwanath, a former professor of entomology in Bengaluru, is known as the father of urban gardening in India. In Mumbai, Preeti Patil’s urban gardening group, Urban Leaves, has also developed a light-weight soil mixture. Called Amrut Mitti, it has more mulch and less soil. Both the potting media are more fertile than the conventional mix.

With a suitable pot, healthy soil and creativity, gardeners are growing everything, from leafy greens, brinjals, chillies and tomatoes to exotic vegetables like zucchini, strawberries and passion-fruit. Vines like pumpkin and muskmelon and fruit trees are the favourites among those who have rooftop gardens. Some grow grains or pulses. One such gardener is Shrikrishna Herlekar of Nashik, who has harvested 200 kg of wheat from his 625 sq ft rooftop farm this year.

Depending on the size of the garden and maintenance, harvest ranges from a few tomatoes or chillies to a kilo of vegetables a day. Facebook comments by the members of Organic Terrace Gardening show that the simple act of growing food has changed the practices and perceptions around food. Some people have stopped buying vegetables from market, while others have revived the culture of sharing the produce with neighbours. “These days I encourage my children to eat raw vegetables because I know they are organic and safe,” says Hariram. “Earlier, my children ate only dosa-sambhar or dal-chapati,” says Rakhee Chaudhary, a homemaker in Delhi. “Now that they see me toiling in the garden, they have taken to eating vegetables.”

People are also waking up to the benefits of eating farm fresh and chemical-free food. Chaudhary claims to have been cured of her thyroid problem and allergies after she started growing her own food over a year ago. “It is either because of good food or outdoor activities, or probably both,” she says. For Hariram, gardening is a good form of exercise. “It involves moving heavy pots, planting, watering and preparing compost, which are strenuous work. I have lost a few kilos without even trying,” he says. Padma Kesari, a homemaker in Bengaluru, says her haemoglobin count has increased by two points since she started consuming home-grown greens regularly. “I am now more inclined to eat greens. They taste so good.”

The act of growing also makes people appreciative of the hard work put in by farmers. Hyderabad-based gardener Madhu Reddy says last summer she struggled to protect her vegetables from heat. Now she is more inclined to pay the price demanded by farmers.

But above all, gardening improves one’s mental and emotional wellbeing. “In Bengaluru, several IT professionals have taken up gardening,” says Seetha Ananthasivan, director of Bhoomi College that provides education in sustainable living. “People need some contact with nature to make life worth living,” she adds. Gardeners agree. “There is a sense of joy and freshness about gardening,” says Murthy. “More than the vegetables, it is the joy in nurturing that keeps me going.”

In 2011-12, the then Finance Minister, Pranab Mukherjee, sanctioned Rs 300 crore for promoting urban gardening. So far, only Kerala has used its share of Rs 12 crore to initiate a rooftop gardening mission in Thiruvananthapuram and provided growing bags, seeds and gardening tools to about 15,000 households. Recently, the Karnataka government has also taken a decision to promote urban gardening in six districts of the backward Gulbarga division. But other states are yet to take an initiative.

It is time the governments realised the potential of terrace gardens, which are not only salubrious for city dwellers but can also tame the double-digit food inflation.