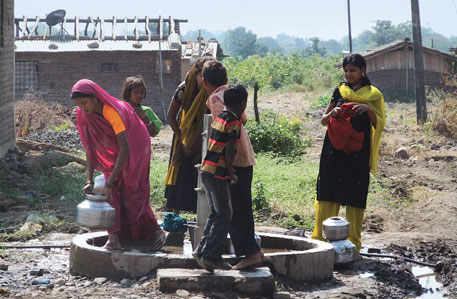 It’s not the kind of relocation story that one usually hears. Early last year three villages were uprooted from their traditional land in the core area of the Melghat Tiger Reserve to make way for free movement of the big cat. They did not protest, and walked away with their belongings and herds of cattle. Eight months since, they are comfortably settled and prospering.

Residents from other villages in the tiger reserve now want to be relocated and have approached the Maharashtra forest department. Officials say people are eager to relocate because of the revised rehabilitation package and a novel formula developed by the forest department to disburse the compensation.

The core area of this tiger reserve in Amravati district has 30 villages. This is not the first time the forest department has made an effort to relocate villages from the core area, as required under the Wildlife Protection Act. It had initiated the programme twice before: first in 2000-01 and then in 2003-04.

It managed to vacate only five. The programme got stalled due to reluctance of people.

“The compensation then was just Rs 1 lakh per family. It was too meagre to motivate people to give up their land and forest resources,” says S M Sarjuse, a range forest officer in the tiger reserve.

There was another option: the government would rehabilitate people at a location of their choice. Landless people would receive one hectare per family and the rest be compensated on house-for-house and land-for-land basis. The forest officials had used this option for relocating two villages from Tadoba-Andhari Tiger Reserve in Chandrapur district in 2007. Each family was given a house and a little more than two ha as part of rehabilitation package. But they could not grow crops in the absence of irrigation facility. Within two years, most had returned to the forest, saying they were well-off depending on bamboo and forest produce (see ‘Relocation by half measures’, Down To Earth, August 1-15, 2009).

So in 2008, when the Centre raised the compensation amount to Rs 10 lakh per family, following the recommendation of the National Tiger Conservation Authority, forest officials seized the opportunity. “We prepared the proposal for relocation of Amona, Nagartas and Barukheda villages in Wan wildlife sanctuary and sent it to the Ministry of Environment and Forests,” says G D Deshmukh, range forest officer of Barukheda range. The relocation process could not be initiated until January 2011 due to administrative hurdles and funds crunch. But once the money was sanctioned, 381 people from these villages were relocated within four months, he adds. 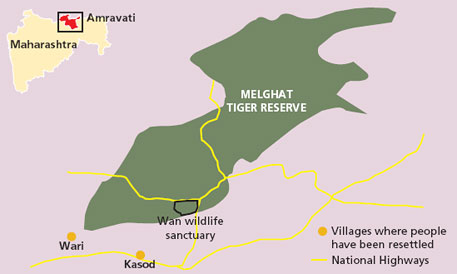 “This is first of its kind relocation in the country where an entire village has been shifted out of forest in one go,” says Praveensingh Pardeshi, Principal Secretary (Forest), Maharashtra.

The success lies in the formula, which the forest and administrative officials worked out with village heads to ensure assured income to people at regular intervals. They helped the residents open savings account and transferred the compensation amount to them under three plans. Rs 2 lakh was deposited in the savings account so that the residents could use the amount to pay for the cost of shifting and constructing new house. Rest of the money was put in fixed deposits (FD): Rs 3 lakh for nine months to facilitate purchase of farm land or meet other needs in near future and Rs 5 lakh for six years. The interest on FD would accrue in the savings account.

Residents of Amona were resettled in Kasod village in Akola, while people from Barukheda and Nagartas were resettled in Wari village. The irrigation department offered its abandoned colony in Wari, built during the construction of Wan dam. People eagerly bought the houses at Rs 60,000 to Rs 80,000, says Deshmukh. “This is for the first time that the irrigation department has given its land for relocation of people in the state,” Pardeshi says.

The revenue department helped them get land, but asked them to pay for it and construct houses on their own. “We were careful not to repeat the mistake committed while rehabilitating people from Tadoba-Andhari Tiger Reserve,” says D G Goswami, assistant conservator of forest, Akot Wildlife Division. Using the money they have dug wells and installed borewells, and are growing crops in abundance.

In place of a thatched hut in Amona, Mungilal Patel Kasdekar is now the owner of a three-storey building in Kasod in Akot tehsil. He lives with the families of his three sons and had received Rs 40 lakh as combined rehabilitation package. With the money, he purchased a hectare of farm land and one tractor, which he rents out. Together, his family earns Rs 20,000 a month. This is above the interest amount they get on the Rs 20 lakh in their FD accounts.

His neighbours Ramvilas Kasdekar and Kalya Pandu Patil have bought second-hand SUVs, which they have rented out for passenger service from Kasod and nearby villages to the tehsil headquarters. “I never thought I would own a four-wheeler,” says Ramvilas, who proudly flaunts his cellular phone, motor bike and the satellite TV connection. “While living in the forest we barely had the electricity supply. Very few had ration cards. Every day we would walk 10 km to Kasod or other villages, for all our needs. It was almost impossible to go to a health centre. Now, the health centre, schools and markets are all within the distance of a few kilometres,” he says. The only problem is, says Ublal Baluja Kasdekar, then police patil (village guard) of Amona, “we do not know where to graze our cattle herds”.

Residents of the host village are also happy with the influx. Though the region is fertile, land used to lie fallow due to labour shortage. Kasod residents are now leasing out their land to Amona families or hiring them as farm labour.

The successful rehabilitation of Amona, Barukheda and Nagartas has prompted at least six other villages in the tiger reserve to appeal for relocation. The forest officials are preparing a relocation plan for them, says G H Chavan, forest guard at Amona. With the villages and their 3,000 herds of cattle removed from the area, tiger, leopard, hyena and sloth bear have started returning to the area, says Chavan, who had never spotted a large carnivore in the area during his posting for over a decade.