The conflict between allopathy and homeopathy is an old one

The principles of homeopathy were first expounded by Samuel Hahnemann in the last decade of the 18th century. This German physician stated that certain substances produce symptoms of illness when administered in large doses to a healthy person. However, when administered to the sick, in diluted potions, the same substance has curative properties. This principle in short is described as “likes cure likes”.

The term homeopathy is derived from two Greek words “homoios” (similar) and “pathos” (suffering or disease). Homeopathic medicines are believed to work in infinite dilutions, most often to an extent that no chemicals are present in the preparation recommended for therapeutic use.

Homeopaths believe that when diluted the active chemical disappears, but it leaves some of its properties in the diluted solution. This is in stark contrast to basic principles of the allopathic system which states that efficacy of medicinally active substance increases with increase in concentration.

The dispute in India

The dispute between the two systems of medicine is age-old and continues today as well. In the mid-19th century, Rajendralal Datta, a Calcutta-based practitioner of allopathic medicine created an uproar by shifting over to homeopathy. The physician is said to have treated public personalities such as Ishwar Chandra Vidyasagar and Radha Kanta Dev. When the Calcutta chapter of the British Medical Association was set up in 1863, Datta campaigned vociferously for recognition to homeopathy.

But he was up against formidable adversaries. Among them was the eminent physician and founder of the Indian Association for the Cultivation of Science, Mahendralal Sircar. Called to deliver the inaugural address of the British Medical Association’s Bengal branch, Sircar launched into a diatribe against homeopathy. The lecture earned him lots of accolades from allopaths.

In 1866, Sircar decided to take on John Morgan’s well-known Philosophy of Homeopathy. It struck him then that this mission required some knowledge of homeopathy and so he approached his old adversary, Datta. He spent six months with the physician, closely observing the method of treatment followed in homeopathy. 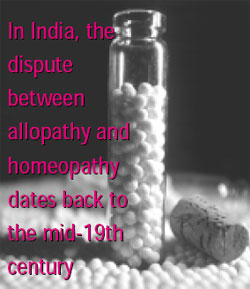 Sircar’s harassment did not end here. In 1878, the senate of Calcutta University nominated him as a member of its medical faculty. But all other members lodged a strong protest against this and even expressed their inability to sit with a person “who had faith in a useless subject such as homeopathy and who followed it as a method of medical treatment”. The senate asked Sircar to give a rejoinder.

The scientist responded with a detailed report. He remarked that though he could not fully accept homeopathy’s dilution theory, there was no reason to reject this system of medicine without making sufficient investigations. Thus though he did not accept the basis of homeopathy, he appreciated its healing potential. The senate excommunicated Sircar. After being outcast by his alma mater, this second MD of Calcutta University became an even more zealous advocate of homeopathy. In 1868, he started the Calcutta Journal of Medicine, to campaign against the orthodoxy of allopathic medicine.

In 1878, P C Majumder, another graduate of the Calcutta Medical College, converted to homeopathy. He established the Calcutta Homoeopathic Medical College and Hospital in 1881, which continues as the oldest homeopathic teaching institution in India. By the beginning of the 20th century, there were more than two dozen homeopathic practitioners in Calcutta — there were only a couple about fifty years back. In 1919, the Bengal government sought Sircar’s advice when a severe plague epidemic hit the province. But official government recognition was to come only in 1937: that year the Bengal legislative assembly passed the Bengal homeopathy faculty bill.

M K Chattopadhyay is a scientist with the Centre for Cellular and Molecular Biology, Hyderabad, Andhra Pradesh