How does record wicket-taker Kapil Dev maintain a blistering physical pace at an age when cricketers usually hang up their bats? 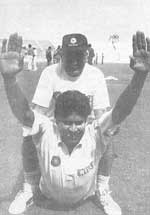 FEBRUARY 25 had Kapil Dev Nikhanj heaving with a cough and cold, an evil combine that has probably tripped up more sports performances than any other human malady. Others would have called it a day: Kapil Dev did six laps around the Wankhede Stadium in Bombay's muggy, polluted heat. The cough and cold fled and he subsequently became one of the more enthusiastic participants in the conditioning camp for the New Zealand tour.

Exactly 17 days before the cold, Kapil had taken his 432nd Test wicket and busted Sir Richard Hadlee's record set during the 1988-89 series in Bangalore. This at 35 - an age when galloping atrophy forces a cricketer to hang up his bat, when his fat:muscle ratio mutinies, his shoulder muscles pack up under inflammation, his knee rages under weight, his wrists creak, his back is as stiff as a plank. Lately, for Kapil, too, outswingers have become difficult, and he has lost rev over the years.

"His determination is unbelievable," says Ali Irani, the Indian crick- et team's official physiotherapist. "At times, I've felt that even when he was only 60 per cent fit, he has played the match and produced results." Kapil has missed only 13 days of international cricket.

In June 1990 came Kapil's medical apotheosis: the entire Indian team underwent a battery of physiological tests - aerobic capacity, the treadmill, motor ability, strength, fat analysis, and pulmonary and cardiovascular fitness - and Kapil was in the first three, despite being the elderly codger of the team, says P S M Chandran of the Sports Authority of India (SAI).

Chandran observes that of the three body types - ectomorph, mesomorph and endomorph - starting from marathoner lean and running to surno fat, Kapil is the average of both extremes. "The mesomorph," says Gursharan Singh, the former cricket coach at the National Institute of Sports, "has the best potential to develop into a pace bowler."
The foundations were laid early in Chandigarh, when the adolescent Kapil ran cross-country to improve his stamina. Playing regular, gruelling sets of squash honed endurance; table tennis and badminton sharpened reflexes and perception. Barring five arthroscopic knee surgeries and a bagful of the usual minor, niggling injuries, Kapil Dev's career has been smooth.

His weight: height ratio falls well within the optimum 1710 per cent differential range. Oscillating tightly between 72-74 kg and 6ft l in tall, he has kept himself ideally just below par. A computerised fat analysis conducted by Irani on the Indian squad showed that he came well within the prescribed 13-15 per cent of body weight. He has a benignly slow heart- beat range between 46-50 - 72 is normal - and a blood pressure of 120/80. He shares with Mohammad Azharuddin the highest threshold of pain in the team.

Irani insists on uniform morning limbering-up and warming-up exercises lasting up to 45 minutes before match play. "No joint, no muscle is spared. It makes a bowler more mobile. It increases blood supply, enhances circulation, provides nourishment to the tissues and makes the bowler more flexible," he says. And he enforces a hard diet with a high carbohydrate content (70-80 per cent), complemented by a daily dose of multivitamins.

Independently too, Kapil keeps up his end of the bargain: no greasy food, few sweets and soft drinks (despite an endorsement in various industry commercials), and no smoking.

But Kapil has his Achilles Heel - his right knee, where he has had repeated trouble with the shock-absorbing lateral and medium miniscus, casting a deep shadow over his career. He cannot entirely manoeuvre the knee and has lost full movement in the right leg. And age, a ruthless degenerative process, has taken its toll: his right shoulder triceps and biceps are chronically inflamed.

But Kapil is said to be emotionally unflappable: he has countered depressives like losing his captaincy in 1983 soon after the triumphant Prudential World Cup campaign, and he and his wife Romi's inability to have a child. In fact, say psychologists, it is quite likely that his failure in one important social sphere has driven him to excel in another.

N K Chadha of Delhi University, who has innovated a sports-specific "ego-gram" for measuring "psychometric properties", believes that three significant factors - independence, conscientiousness and the ability to be relaxed - help determine a sportsperson's calibre. "I would think that the adult ego state is the dominating factor in Kapil," he says.