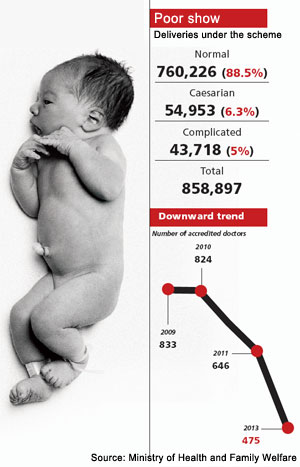 Twenty-four-year-old Usha Ben, a tribal living in Santrampur tehsil of Panchmahal district, delivered a baby at a private clinic in the absence of a doctor. The baby was delivered by a nurse in the clinic. The doctor stopped attending to her as soon as she was told that Usha Ben was a beneficiary of the Gujarat government’s Chiranjeevi Yojana. Soon after the delivery she was sent home without the essential postdelivery checkup.

The state government’s financing scheme that aims to reduce maternal and infant mortality rate among tribal and below poverty line (BPL) women by promoting institutional deliveries is in a shambles.

The scheme was launched in November 2005, a few months after the Central government launched the Janani Suraksha Yojana under the National Rural Health Mission, which, too, aims to improve maternal and child health.

Problems in Chiranjeevi Yojana abound as women restrain from availing benefits of the scheme.

“Doctors ask for too many documents if we want to avail the scheme’s benefits,” she says. “Worse, they discriminate between us and those who pay for the services. Initially, I had gone for my ante-natal checkup to a private hospital, but the doctor there made me wait till the end,” she says.

The scheme was launched in November 2005 as a one-year pilot project in five most vulnerable districts— Banaskantha, Dahod, Kuchchh, Panchmahal and Sabarkantha. Later, it was extended to the entire state. Nonincome tax paying women belonging to above poverty line group were also incorporated in the scheme. As per the scheme, the government signs agreements with private hospitals and pays them a fixed amount of Rs 2,80,000 for a package of 100 deliveries, be they normal, caesarean or complicated. To arrive at a uniform 100 deliveries fee package, the state government had consulted experts, SEWA Rural (a non-profit providing health services in south Gujarat) and representatives of Federation of Obstetric and Gynaecological Societies of India.

Eight years down the line, doctors avoid the scheme as much as the beneficiaries. The number of doctors affiliated with the scheme has dropped from 833 in 2009 to 475, health ministry’s latest data shows (see infograph on p21).

Sore over remuneration
“We get Rs 2,800 per delivery. This is much lower than what we charge from patients otherwise,” says a doctor of an accredited private hospital in Vadodara on condition of anonymity. In 2009, the state health department held a meeting with doctors of all the accredited private hospitals in Valsad district. Here, doctors argued that the remuneration was too less. In Vadodara, normal delivery at a private clinic costs at least Rs 7,000, while caesarean costs up to Rs 40,000. In Valsad, normal delivery costs between Rs 4,000 and Rs 5,000, and caesarean costs between Rs15,000 and Rs 25,000.

Doctors also complain of a tedious verification process. Earlier, they had to fill a simple two-page form. The first page was a checklist of services provided by the private hospital and the second page needed information to prove that the patient was BPL or tribal. But now, the government has made the process stringent. “We do not have the expertise to verify documents from anganwadis or district officials which can prove that the patient, indeed, is BPL or a tribal,” says the doctor in Vadodara. 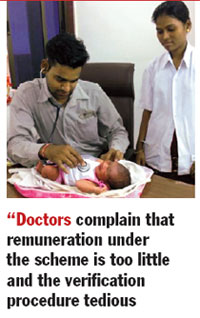 The state government made the process of documentation stringent after cases of financial fraud by doctors started pouring in. An auxiliary nurse and midwife (ANM) at Umargaon village in Valsad got a pregnant woman registered under the scheme at a private hospital. But when the woman went to the hospital for delivery, the doctor asked her to pay Rs10,000. The hospital staff was angry and misbehaved with her when she refused, says the ANM, requesting anonymity. “The hospital wanted money from the government as well as the patient,” she adds. The Valsad health department has ordered closure of three such private clinics.

“Introduction of the scheme, which gives a fixed amount for all deliveries, has brought the number of caesarian deliveries down,” says Dileep Mavalankar, director of IIPH and lead author of the study. However, it is also possible that the doctors chose only those patients who needed normal delivery, he says.

The way ahead
Doctors have ample arguments for avoiding the scheme, but none gives them the right to give patients substandard treatment, says Sunanda Ben of Gujarat-based non-profit Sahaj, which works among the urban poor to reduce infant and maternal mortality rates.

“They can pull out of the agreement if they like, but they cannot discriminate,” she says. To emerge from the situation, the government plans to increase the incentives, says A S Sanghvi, chief district health officer, Valsad. “We are thinking of increasing the rate to Rs 4,000 per delivery,” he says.

The need of the hour is strict monitoring and grievance redressal, says Mavalankar. “To strengthen the scheme, human resource and infrastructure must be developed,” he says.

“We need to train Accredited Social Health Activists and ANMs to keep a check on malpractices. This apart, more health clinics should be opened within everyone’s reach,” he says.

Indu Kapoor, director of non-profit Center for Health Education, Training and Nutrition Awareness, Ahmedabad, says stress should be on safe delivery rather than on institutional delivery.

“There are places in tribal or rural areas where no ambulance can reach.

Traditional birth attendants should be encouraged at such places,” she says. The design of the scheme limits its reach. Sparsely populated tribal areas are sure to have less gynaecologists. To cater to remote areas, Gujarat government signed an agreement with the government of Daman and Diu. That too did not materialise.

“It is also wrong to assume that private hospitals per se are good and would provide acceptable services. A scheme like this requires regular monitoring. It seems that the government has shunned its responsibility by signing agreements with private hospitals, and all that they care about is profit. The loser in the end are expecting mothers who require utmost attention.”