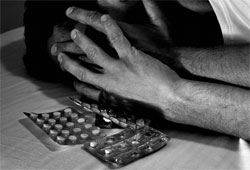 In the past eight years, 2,868 deaths have occurred during clinical drug trials across India. But only 89 have been attributed to such trials and compensation has been paid in 45 cases, said the Union health minister on March 5 in Parliament. Considering the Supreme Court’s recent observation that uncontrolled clinical trials “are causing havoc to human life”, Ghulam Nabi Azad’s speech only highlights the poor state of regulations for clinical drug trials.

To tighten guidelines for conducting these trials, the health minstry had amended the Drugs and Cosmetics Rules by passing three not ifications between January and Febr uary. The notifications specify procedures for compensation and functioning of the ethics committee, which is constituted by an institution conducting the trial.

Health activists say the notifications are rife with loopholes. The first one deals with compensation in case of injury or death during clinical trial but the onus of deciding the injury continues to be with those carrying out the trial. S Srinivasan of All India Drug Action Network says, “The notification does not define injury. How does one  prove that an injury is related to the trial? Who is the appellate body in case the compensation is not satisfactory?” Amar Jesani, editor of Indian Journal of Medical Ethics, says it is important that arbitration boards are created at local and regional levels to arbitrate on the quantum of compensation a provision that was present in the draft but is missing in the notification.

Claiming compensation continues to be difficult. As per the first notification, the Drugs Controller Gen eral of India (DCGI) will be the final authority to determine cause of injury and compensation amo unt. There is a provision that the victim, if not satisfied with the compensation decision, can approach the Centre. How ever, it is not clear which Central body should be approached. In the abs ence of an appellate body, the final auth ority should have been a neutral body, say activists.

The first notification ensures that compensation is received within six months. But what if the pharma company does not agree with DCGI’s decision? If it approaches a lower court, the decision could get prolonged indefinitely. 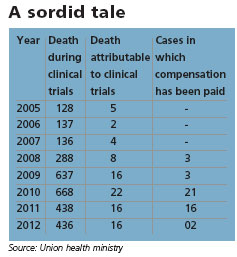 Activists say since the majority of the participants in clinical trials are poor, there should be provision that the aggrieved party can promptly approach the resp ective high court. This will fast track the case.

In view of the complications in obtaining compensation, activists have long been demanding that in case a participant starts showing signs of an adverse effect he or she be immediately paid half of the compensation. Although the draft had met this demand, the final version makes no such mention. Srinivasan says the compensation model needs clarity (see https://www.downtoearth.org.in/content/clinical-trialsillogical-compensation-formula).

Another sphere where government efforts have fallen short is in defining the role of ethics and expert committees in the third notification. Jesani, who has participated in many ethics committees, informs, “The notification on ethics committees is in response to the criticism that they are not registered with public authorities and there is no supervision over them.” The notification, however, does not satisfy on two counts. First, there is no information on how the Central Drugs Standard Control Organisation, which oversees pharma companies and clinical trials, will manage since it is short of staff and low on funds, says Jesani. Secondly, he says, unless all ethics committees adopt a uniform procedure for monitoring trials, their decisions would become arbitrary. “They also need to be independent of their institution’s interests.” Similarly, the third notification does not define the constitution of the expert committee, which is tasked to recommend quantum of compensation to DCGI in case of death. “On what basis will the expert committee recommend has also not been defined,” says Jesani.