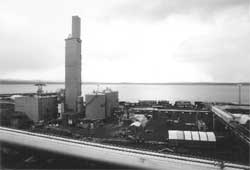 norway's hottest environmental issue at the moment is the planning of two gas-fuelled power plants, which will lead to the emission of 2,000,000 metric tonnes of carbon dioxide ( co 2 ) annually. Permission for setting up the plants was granted by the Norwegian parliament before industrialised countries agreed, in December 1997 at Kyoto, to reduce greenhouse gas ( ghg ) emissions by 5.2 per cent below 1990 levels by 2010.

Until October 1997, the conflict was between the government and its supporters in the parliament on one side, and opposition parties and environmental groups on the other. Later, however, the issue became highly politicised. Norway's new minority-coalition government is against building the plants. The majority in the parliament is, however, for the project. Meanwhile, more than a thousand environmentalists prepare to use direct action to block construction of the plants.
Getting enough energy used to be a "luxury problem" for the four million people of Norway. Waterfalls in this wealthy country have secured an abundance of clean, water-powered electricity. The country has no nuclear power or coal-fuelled power plants. Moreover, Norway's vast resources of petroleum and gas outside its shores have made it the world's second largest exporter of crude oil in the last 25 years. The petroleum industry is responsible for most of the increase in emissions of co 2 in Norway.

As almost 100 per cent of electricity is produced from waterfalls in the country, it got a fair deal in the Kyoto protocol. While the European Union ( eu ) has to cut its ghg emissions by 8 per cent by 2010, Norway has been allowed an increase of one per cent compared to the 1990 level.

However, one should keep in mind that the emissions of ghg s, of which co 2 is the most serious, have risen substantially since 1990. Therefore Norway has to reduce its emissions by 5 to 6 per cent from the present level of emission by 2010. From what sources is Norway going to reduce emissions? It would be unwise to start by increasing the emissions through building two gas-fuelled power plants, says prime minister Kjell Magne Bondevik of the Christian Popular Party. The plants will increase Norway's co 2 emissions by 5 to 6 per cent. This would equal emissions from 700,000 cars annually -- about half of all the cars in the country.

"Those who still want the plants must tell us from where to cut emissions," says the prime minister. The supporters of gas power, on the other hand, claim there is no need to drop the plans. "I am satisfied with the Kyoto protocol," says Thorbjoern Jagland, Norway's prime minister till October 1997. He sees an option for the power plants in the possibility -- given in the Kyoto protocol -- of buying emission quotas in the international market. The details for buying such quotas, however, have to be negotiated. In the present year, the power plant issue might cause a crisis in the parliament.
The company Naturkraft, most of the shares of which are owned by the government, has applied for permission to build Norway's first gas-fuelled power plants. The company aims to export the power. Each of the two plants will have a capacity of 350 megawatt ( mw ). The project was posted to be environment-friendly. Although gas-fuelled power plants cause a certain amount of air pollution, they let out far less co 2 than power plants fuelled by coal or oil. The power is to be exported to other Nordic and European countries, thus reducing the amount of coal-based power in Europe. Advocators of the gas-fuelled power stations claim that this would contribute to reduction of ghg emissions.

There are other arguments as well. Norway is rapidly becoming a major supplier of natural gas in the European market. Almost all of it is exported in an unrefined state through pipelines in the Northern Sea. By utilising this natural resource, for instance by producing electricity, Norway could reap more profits from the gas. It is important for Norway's industry to take part in developing natural gas technology. The country should not continue to be an exporter of raw material. Refine the natural resources and create more jobs and opportunities, the supporters of the plants argue.

The green profile of the power plants is, however, much debated. There is no guarantee that the electricity from these plants will replace polluting coal-power in other European countries. Probably, they will just contribute to an overall increase in the consumption of energy as increasing energy supply will increase energy demand, critics point out.

Also, Norwegian gas power would compete with a drive for real environment-friendly energy, says Action Against Gas-Fired Power Plants ( agfp ), a broad coalition of environmental non-governmental organisations ( ngo s) and other citizens groups trying to stop the gas-fuelled power plants. They have collected 100,000 signatures against the plants and produced a counter paper to the government. More than one thousand activists are prepared to stop construction of the plants. In the summer of 1997, many of them assembled on one of the sites where Naturkraft wants to build a plant. The environmentalists discussed strategy for blocking the construction by using Gandhian, non-violent passive resistance.

A survey conducted in Norway showed that 44 per cent of those asked were against the power plants. Only 28 per cent were in support, and no less than 39 per cent came out in support of civil disobedience to stop the construction of the plants, asserts agfp .

The Norway wing of international environmental pressure group Friends of the Earth ( foe ) has taken a firm stand against the gas-fuelled power plants. After Kyoto, such plants are financially unsound, they argue. The cost of oil, gas and coal will increase, they add. They say the Kyoto protocol should be the first step towards a revision of Norway's energy and transportation policies, and suggest that Norway bury its plans to build gas-fuelled power plants in order to reduce the emission of ghg s, and replace oil by wood, chips and heating pumps for heating purposes. Leftover heat from industry should be exploited, transport by private cars restricted and organic waste composted, they point out.

Environmentalists promote energy economisation and increased use of renewable energy from wind, sun and waves. At the moment, several wind mill projects are being planned along the coast of Norway. Denmark already has a large wind mill industry. Biomass is another energy source with good potential in Scandinavian countries, where forest cover is still large and trees are regularly planted to replace felled trees. Sweden, in particular, has developed biomass technology, cutting wood into chips used by special stoves for heating and electricity production.

However, not all the environmental groups rule out gas-fuelled power plants. Greenpeace-Norway's spokesperson Kalle Hesstvedt says there is room for constructing the disputed plants without breaking the protocol. But they will cost too much. Hesstvedt says the cheapest way for Norway to fulfil the Kyoto protocol is to drop the gas-fuelled power plants. Others point to the potential for improving the technology through removing the co 2 from power production. As the technology for removing the co 2 and deposit it already exists, it is primarily a question of the society willing to pay for it, says a representative of the company Kvaerner.

Bellona, an environmental foundation, agrees. They advocate a drive to develop the technology behind the gas-fuelled power plants. Bellona, unlike most other environmental groups, tries to cooperate with companies to find practical solutions to the most urgent problems of pollution. Constructing the two gas-fuelled power plants will cost about us $500 million. An expert says removing and depositing the co 2 will cost another us $250 million, increasing the cost of electricity production by us $0.11 per kilowatt per hour.

A few days after the Kyoto meet, the owners of Naturkraft discussed the fate of the gas-fuelled power plants. They concluded that they would go on with the projects, but admitted there were some uncertain aspects. One is the possibility that the parliament will change its view. Another is the question of "green" taxes that might influence the economy of the plants. However, the company claims that the outcome of the Kyoto meeting was favourable for constructing gas-fuelled power plants in Norway. They hope to have the two plants working by 2000.

In other countries, similar plants would have created no public commotion. Compared to power production from other fossil fuels, gas is less polluting. Harald Norvik, executive director of Statoil, the government-owned petroleum company that owns one-third of Naturkraft, says: "Gas power is for a large majority the most environment-friendly way to supply fresh electricity. Few others have water power like Norway. It is a question of whether we are going to build gas-fuelled power plants and export the electricity, or whether we should export the gas and let others do it."

The agfp explains the opposite view in a bulletin: "The threat of global warming must be countered by emission cuts. Unless we start making these cuts now, our children and grandchildren will inherit even worse environmental problems." Sigurd Aarvig is a freelance journalist based in Norway