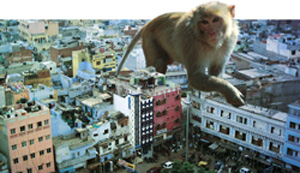 There appears to be no way to contain the simian menace. Monkeys continue to stray into densely populated areas; driving them out has become a challenging task. Mooting a solution, the Delhi High Court in February ordered the Delhi government, the Municipal Corporation of Delhi, the New Delhi Municipal Council and the Delhi Development Authority to shift monkeys to the Asola Bhatti Wildlife Sanctuary in the city.

"According to the court order, four cages should be kept at vantage points. These room-size, walk-in cages will have food and other incentives for monkeys. Monkeys will be allowed to familiarise themselves with the cages and the doors will be locked when a majority of them are in. They will then be transported to the Asola Bhatti sanctuary," says Sonya Ghosh of the Citizens for Welfare and Protection of Animals, a Delhi-based ngo. Happy with the order, Ghosh says it is "humane and compassionate".

But Iqbal Malik, primatologist and founder-director of Vatavaran, an ngo, feels the solution lies in a 'primate estate', providing enclosures for monkeys where they will be quarantined and then housed. A select few will be given to research organisations and the males kept permanently will be sterilised. Vatavaran is working to raise support and funds for the facility. Malik plans to train local communities run it and generate revenue through tourism and research. But Ghosh does not buy the idea of using monkeys for research. "There was an experiment where monkeys were sterilised when they were three months old. They are used for brain research, which is not acceptable. This needs to change," says Ghosh.

According to Malik, even if monkeys have to be translocated, they need to be quarantined and tested for diseases like tuberculosis--common among monkeys in urban areas. She says isolating monkeys from groups runs the risk of fragmentation and causes clinical depression and aggression. "Monkeys have strong social structures and catching them randomly could lead to chaos. When an individual disappears from a group the others get disoriented and aggressive. Besides, the health of forests around the country has deteriorated considerably, which is why they move to human habitations where it is easier to find food," she says.

Sujoy Chaudhuri, research fellow with the Washington-based Center for Applied Biodiversity Science, says, "Sterilisation of males seems to make sense because there are fewer males and it is simpler to sterilise them. But among polygamous groups, all the females can conceive even if one male is fertile."

In another measure to tackle the problem, langurs were used to chase monkeys out of urban settlements in Delhi. But this measure is unscientific, says Malik. "Monkeys merely disperse to newer areas where a fresh set of residents start complaining."

Culling is not foolproof either, says Chaudhuri. It is expensive and people need to be trained to do the job, which is a problem in various parts of India. Besides, says Malik, there are issues linked to conservation and science.