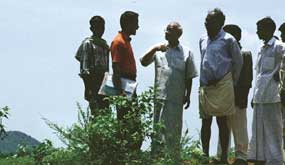 Having to write a happy story makes me uneasy. Ten journalistic years of persistently sifting for what's wrong in every event/statement has taken its toll. Cynicism, an assortment of palliatives, and antacids are canonical accessories of roving reporters. The need to be certain of the facts often makes one doubt even that which resembles the truth to a reasonable degree of verifiability. Nothing aggravates this unease like not knowing the language of interviewees, and having to rely on unpracticed translators with an interest in the representation.

Should I go with an independent translator, I asked a friend familiar with the epistemological angst of hacks. "No. I know the man. Just go with him to the village," he advised. I was setting off for Vizianagaram district of Andhra Pradesh, chasing a story I had stumbled upon five months ago in a newsletter of the state's agriculture department. A pesticide-free village, said the headline.It described how a village gave up pesticides and increased yields, all this at the instance of Vijaya Kumar, their mandal agriculture officer. Incredulous, I read the whole thing over and over. Governments across India swear by chemical pesticides and actually peddle them. How was a government newsletter celebrating an officer who had done just the opposite? And yet, there it was, in sans serif type on glossy yellow paper.

So, I went to Vizag. Vijaya Kumar came across as a man one could trust. I'd made arrangements for some 'independent' people to accompany us, but my instinct told me to not call them. Let's hire a taxi, I said. But the village is close and we can go on my motorcycle, he argued. Now I am partial to two-wheeled locomotion, but I didn't want to accept a favour. So I bought petrol, and we set off on tandem to Penta Srirampuram village in Gantyada mandal. It's a long name, so I'll use psrp (and hope our copy editors don't delete it out of their revulsion of acronyms).

Government agriculture officers are mythical creatures in villages. I don't seem to recall seeing one working in a village in any of my travels. But Kumar seemed to be familiar with all manner of people along the route, and would stop to exchange pleasantries. Through stray English words in the Telugu drone, I could make out he was proudly telling them about the journalist from Delhi who had come to see their village. After working in the Gantyada mandal from 2000 to 2005, Kumar was transferred. He obviously hadn't been forgotten.

How did he manage to visit the villages so frequently? What about expenses? It was difficult previously, he replied. The former government gave only Rs 450 for conveyance. The present government has raised it to Rs 550, and it gives an additional Rs 5,000 per month to hire a vehicle. Back in Hyderabad, the state's agriculture commissioner, Poonam Malkondiah, had told me how she had insisted upon improved facilities for extension staff in the state. So, the government does work, I mused, as the Hero Honda sputtered into psrp.
I was met first by a large man with a lungi of a kind atypical of Andhra. Out came the first words of Hindi I'd heard that day. That, too, in a reassuring Bihari lilt that took me back to my days in Delhi University. It felt like that one time when I had a flat tyre on my motorcycle at 3 am, but right next to a repair shop that was serendipitously open at that irregular hour.

His name was Laxman and he had a sales job for a tractor company. His father Satyanarayana had been a law advisor to the railways in Bihar. Between father and son, I was confident of reaching the truth right through the morass of incomprehension. People knew Kumar and met him as their own. Agricultural chemistry, I muttered. In a matter of minutes, a gathering was congregating.I began doing what I do for a living ask questions.

What are the main crops? Paddy, predominantly, and some sugarcane. A canal from a reservoir on river Gosthani feeds the 13 tanks that irrigate the village. Do they use pesticides? No, not anymore, said one. But some do, said another. It took several versions, revisions, and translations to settle that very few farmers were using chemical pesticides in the village, and it varies from season to season. Use of chemical fertilisers has also dropped sharply. Why don't they use pesticides and fertilisers? Because the yields are the same, whether I spend money on the chemical inputs or not, said Laxman. Several farmers chipped in with their bits. The father told me they were saying they got better yields now. How, I asked? Their answers weren't very clear. Kumar mediated.

When he came to this village first in 2000, there was an article in a Telugu daily describing how paddy productivity had fallen from 15-20 bags (each of 75 kg) per acre (.4ha) to 8-12 bags per acre, Kumar recalled, promptly producing the article which he had cut from the newspaper, and filed. The losses were mainly due to leaf-folder and stem-borer pests, as also due to the fungal disease called sheath blight. And though the farmers didn't know, the pest problem had to do with overuse of chemical fertilisers, in particular, urea (nitrogen). Excessive nitrogen gives plants a flush and makes the leaves luscious to insects.

The village, Kumar realised, didn't need much urea. Organic matter in the soil here was high, and there were populations of friendly insects that feed on pests. Some farmers grew a green manure crop before the kharif season (a green manure crop is not harvested but mulched into the soil to improve fertility). The soil and the farmers were just right to try something different.

Kumar started taking part in community events, and held interactive training exercises. Getting farmers to ignore the advice of pesticides dealers was critical. Kumar had a rapport with journalists in the area, and he got them to publish advisories. The agriculture extension officer, the most elementary cog of the agriculture machinery, began to live in the village.

Kumar got his first convert in kharif 2001 B Yerri Naidu, one of the largest farmers with 16 hectares. When the leaf folder insect attacked the crop, Kumar thought there was a chance of natural predators controlling their population below the threshold of economic injury. Spraying pesticides would have killed the friendly insects first. Reluctantly, Naidu agreed to not spray, warning Kumar that he would be responsible if there were losses. Kumar was willing to run the risk. They waited for the moment of truth the harvest.

It was fable like. Naidu's yield was better than in previous years. This, he announced in a public meeting. Kumar was now convinced he was on to something. Was it possible to get all the farmers in the village to accept a management approach to plant protection, rather than the event-dominated approach of spraying pesticides? He started looking for literature, examples. There was literature on integrated pest management from the state agriculture university, but no examples of it working for an entire village.

Kumar decided to ask Google. The Food and Agriculture Organisation's websites described the toxic effects of pesticides. Crucially, it also had examples of villages in Indonesia that had successfully managed to reduce use of chemical inputs. It was possible, after all. He wrote to them in January 2002, and received resource material and words of encouragement. The kharif of 2002 saw an aggressive Kumar marshalling plant protection measures. It began with convincing farmers to restrain their use of urea and not reach for pesticides the moment they saw a pest in their fields.

A farmers' meeting was held on October 16, World Food Day.It came out in the meeting that nobody had sprayed pesticides, and every farmer had higher yields. Calculations showed the yield was 385 kg higher on each acre than the previous year -- and the cost of cultivation was lower. Kumar wanted to record that moment, so he made the village sign a letter stating they were free of pesticides. He requested the department hold a farmers' field school (polam badi) in the village. His superiors were encouraging of his efforts. The kharif of 2003 saw the district's agriculture brass descend on psrp. Pesticides were sprayed, but only on 3 per cent of the village's total paddy area. The paddy yield had increased to 25-30 bags per acre. 2004 was only an improvement on 2003.

Then came the ultimate compliment. The owner of Sri Sai Surya Stores, a pesticide dealer from nearby Bonangi, told Kumar he was surrendering his licence as there wasn't enough business.

In 2005, Kumar wrote his experience to www.farmingsolutions.org, a website supported by alternative agriculture groups. This got forwarded to several email groups. Environmentalist Bharati Chaturvedi noted it in her column in Hindustan Times, Delhi. Mohsina Kidwai, Rajya Sabha member, asked in Parliament on November 25, 2005, "Whether government was aware that farmers in Penta Srirampuram in Andhra Pradesh have managed to eliminate pesticides from their rice crop by following a three-step procedure as evolved by their agricultural officer?" The government machinery woke up. Scientists of the Central Integrated Pest Management Centre in Vijaywada investigated. They found Kumar's claims true, and wrote a favourable report. This was quoted in the state agriculture department's newsletter, from which I'd picked it up. 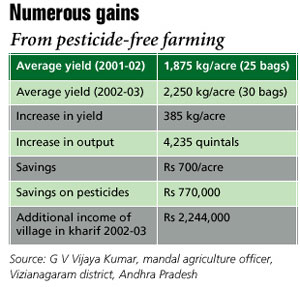 It was dispiriting. Here was an official who had achieved the unthinkable with pluck and originality -- typically, only voluntary groups claim to bring in positive change. And yet the state agriculture department had to wait for the Central team's verdict. But Kumar was defending his department, naming superiors who had encouraged him. He singled out commissioner Malkondiah as an inspiration. He said she relentlessly drives the message that the department must strive to lower the cost of cultivation and use of chemical inputs. But why don't others get the message? Kumar kept quiet. Did the problem lie with the department? Or with the advice it got from the state agriculture university? Kumar said only that the extension machinery desperately needs additional investment and staff.

Ever the agent provocateur, I prodded, telling him how the university says its recommendations are scientific, and that it is the department's extension machinery that fails to advice farmers properly. This is where he snapped. In the past 30 years, he said, the farmers have changed, the chemicals they use have changed, agriculture itself has changed; what hasn't changed is the pesticides (and their concentrations) that the university recommends. He spoke at length, but I figured he was talking off the record. He had a job to mind. As we rode back to Vizag, I was trying to figure out whether what I saw and heard was true. Whether the agriculture scientists would believe me? Or would they dismiss it as journalistic hyperbole?

Related Articles
CoverFarmers can grow crops without pesticides and earn more in the deal [May 31, 2006]