The government's vanaspati van scheme is good news, but for it to succeed small-scale farmers and local communities have to be brought in its fold 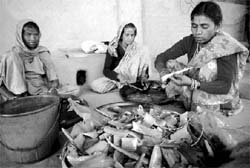 Realising the importance of medicinal plants in the health care system available to the poor people, the department of family welfare of the mohfw started the vanaspati van yojna as part of the reproductive and child health programme in October 1997. In other words, it means converting large areas of wastelands into forests of medicinal plants and herbs. Around 3,000-5,000 ha of land would be identified in each state for cultivation. The Centre would provide financial assistance of Rs one crore per year per van for five years, after which it has to be self-sufficient. The Planning Commission recommends that there should be at least 200 such vans , which would require a total investment of Rs 750 crore. It would come under the joint forest management programme, where people's participation becomes mandatory. It should be managed by a registered society headed by the divisional forest officer.

The government hopes to bring 31.85 million ha of wastelands and denuded forest land across the country under vanaspati vans . But even the "wastelands" have to have productive soil, an irrigation system and few biotic pressures. This is asking for too much. There are two types of wastelands in India. One that is barren because of high salinity and the other which is in the hands of the revenue department and is used as village common lands. A large area of denuded forest land is also classified wasteland. "Medicinal plants growing in these areas would not be of good quality. Reclamation of such lands is a time-consuming process and the cost could be a crucial factor," says Rajendra Gupta. Rajasthan and Tamil Nadu have already been denied the funds because the land they had chosen was not considered appropriate for the plants they had chosen to cultivate. So far, only a few states like Haryana, Himachal Pradesh, Andhra Pradesh, Uttar Pradesh and Madhya Pradesh have been sanctioned the money. Some states have highlighted the lack of a continuous stretch 3,000-5,000 ha of land. Chandra feels that for the programme to be successful, some amendments have to be made. Accordingly she has asked A R Nanda, secretary, department of family welfare, to reevaluate the scheme and "generally revise it so that smaller pieces of land can be used for the purpose".

The kinds of plants that should be cultivated are also yet to be decided. "Initially, the states can use their own people to identify the plants. Later the Medicinal Plants Board will lay down guidelines," says Chandra. Balendu Prakash feels that the programme will be very successful if region-specific plants are emphasised upon. "If the government tries to grow alien plants in the area, the only existing source of native species might also get lost," he warns.

Balendu Prakash himself has been involved in the cultivation of naturally-growing species with the participation of the local communities. The Community Herb Cultivation Centre of vcpcrf has undertaken a project in Raipur district of Dehradun, Uttaranchal. Communities have been fully involved in the cultivation of 20 commonly-found plants in the area. The first harvest -- six quintals of konch ( Mucuna prurita ) -- will be handed over to the traders, with whom a buy-back arrangement was made, on January 25.
The current disorganised trade in medicinal plants benefits only traders and agents. The local people and the practitioners of medicinal plants want a change in the system in the form of government intervention. Unfortunately, experience with ntfp shows that it does not help the local people eventually. Hence, the sound option would be cultivation, especially by small-scale farmers. But again, at present there are no incentives for them to grow medicinal plants.

Growing in the forests is a problem, so is growing on private lands. The government has proposed vanaspati vans but land availability is a problem again. The land requirement as per the scheme is between 3,000-5,000 ha, a stretch no farmer can own. Then there are no legal provisions nor marketing access.

If the government wants to tide over the shortage of medicinal plants, it has to promote cultivation on private lands. The forest department should also permit communities who have traditionally lived in and around forest to cultivate or scientifically harvest medicinal plants in the wild. And scientific research that is being conducted on agritechniques has to reach the farmers. This is the only survival of ism, on which millions of people depend, can be ensured.