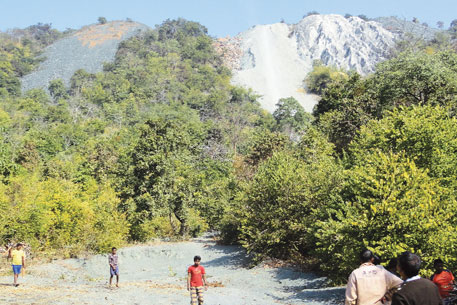 During a film shoot at the beautiful Roro hill in Jharkhand’s Chaibasa district, the villain takes out his gun to kill a young man. The moment he shoots, onlooker Rango Deogam bursts into laughter and yells at the camera crew, “You are shooting a death scene on the hill of death.”

The shoot is stopped because of his outrageous act and Deogam is escorted out when he starts coughing blood.

The 65-year-old resident of the Roro village then clears his throat and says, “That’s death.” Deogam is not the only one in the Roro village who is coughing blood. An estimated 200 people in the 14 villages near the Roro hill are dying slowly from a lung disease called abestosis because of an abandoned crysotile asbestos mine in the area. “The exact number of the victims can only be known after an extensive medical camp is held in the affected villages,” says Punit Minz, convener of Bindrai Institute for Research Study and Action (BIRSA), a non-profit that has been working in the area for the past decade to educate the residents about the problems with asbestos.

The crysotile asbestos mine—which was owned by Birla’s Hyderabad Asbestos Cement Products Limited (HAPCL)—was operational for 20 years between 1963 and 1983 at Roro hill. It was abruptly closed after the mine ran into huge losses. HAPCL has since then changed its name thrice and is now called HIL and is owned by C K Birla. The company website says it provides green solutions.

The company, which employed over 1,500 workers at the site, chose not to inform the workers about the health hazards because of exposure to asbestos. If the company would have sensitised the people, it could have saved the workers who are suffering from asbestosis, which is curable if diagnosed early. Asbestosis is a chronic disease that affects the functioning of lungs. Advanced asbestosis leads to heart or respiratory failure.

The development of asbestosis is slow and the disease becomes critical about 15 years after the first exposure to asbestos. Also, excessive exposure can result in death within 10 years.

“The company never told us about the health hazards of asbestos. It also never conducted medical checkups for the workers for the fear of getting caught. Most of us came to know about the disease long after the mine was shut down,” says Deogam, who worked with the company for five years. “There used to be lots of dust. By the end of my shift, I would look like a white ghost,” he adds.

Mining experts and local NGOs working with the victims allege the spread of the disease increased because the company flouted basic safety norms while the mine was in operation. “They did not follow procedures like mixing asbestos-containing waste material with a wetting agent to check spread of asbestos,” says Madhumita Dutta, an independent researcher who studied the impact of the plant on the people in 2002. The company also did not install mandatory warning signs at the interval of 100 metres from the site or put fencing at the disposal site.

What is even more alarming is that more than 30 years after the mine was shut down, the villagers continue to suffer from asbestos-related diseases because the site was not closed down properly. “There are mandatory guidelines that when an asbestos mine is closed, asbestos-containing waste material should be covered under a minimum six inches of compacted non-asbestos-containing material. But HIL did not even do that. This would have stopped asbestos dust from spreading to nearby villages,” says Minz. 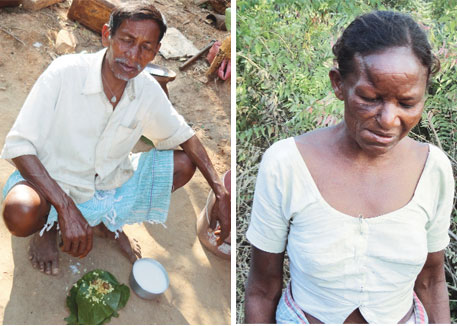 As a result, asbestos dust from the mine continues to deposit in the houses in the nearby villages. It also contaminates the water during monsoon and the runoff from the site ruins the farms. This, the NGOs allege, has infected several villagers who had never worked at the plant with asbestosis.

One such victim is Suru Deogam, 60, who used to frequently visit the foothills of Roro hill to collect twigs for making brooms. “I suffer from bouts of cough and at times my cough is full of blood,” she says. Suru has lost weight and is unable to walk long distances. “I have also been facing difficulty urinating for the past 12 years,” she says.

Roro hill is the only source of livelihood for the residents of the 14 villages that still do not have access to clean water or electricity. As a result, Suru and others from the villages are forced to visit Roro hill every day despite the health hazards. The nearest health centre is 19 km away.

The callous attitude of the district administration can be gauged from the fact that not a single survey has been conducted till date to ascertain the impact of the mine on the villagers. A recent health check-up done by Mumbai-based non-profit Occupational Health and Safety Centre (OHSC) found that 17 people were suffering from asbestosis. The non-profit had screened only 150 villagers and there are approximately 5,500 people staying in the 14 villages.

When Down To Earth contacted Rahul Guha, director of the directorate general of mines safety (DGMS), he said he was aware of the issues but could do little because the site was closed more than 30 years ago. “In 1983, Chaibasa was a part of Bihar. The company had submitted a closure report, but so much time has elapsed and it’s very difficult to trace the papers,” he says.

The 17 people who were found to be suffering from asbestosis during the OHSC health camp approached the National Green Tribunal for justice in January this year.

In the petition, the victims have demanded that the entire area should be cleaned up by the company, and a comprehensive health study should be conducted in the 14 villages. Krishnendu Mukherjee, counsel of the complainants, confirms that the tribunal has accepted the petition.

The village residents were forced to file the petition after the local administration refused to act on several complaints by local NGOs and independent researchers. The battle against the company and the local administration was started way back in 1983 when the late P Mazumdar, a leader of the United Mine Workers Union, issued a list of 30 workers who had died of asbestosis.

Then in 2002, a study was conducted by researchers Madhumita Dutta, Ramamurthi and Arin Basu in the 14 villages. The study, “The Blighted Hills of Roro, Jharkhand, India: A Tale of Corporate Greed and Abandonment”, found that the asbestos waste was causing dyspnea (shortness of breath), hemoptysis (blood in sputum) and blindness among villagers. Dutta says the report was submitted to the state government, pollution control board and even sent to the Central government. “But no concrete action was taken,” she says. Five years later, Sumit Kumar Carr, who is the secretary general of the Occupational Safety and Health Association of Jharkhand, conducted another study on the area and published a report titled “Contaminated by Orphan Mine Waste—The Sorrow of Roro River”.

Also activist Gopal Krishna of Toxic Watch Alliance filed a number of complaints with the DGMS, highlighting that nearly 0.7 million tonnes of asbestos waste mixed with chromite-bearing host rock lies scattered on the hill. “We also pointed out that not a single comprehensive study has been conducted by the government in the past 30 years to assess the impct of this hazardous waste. But the local administration has done nothing.”

People now hope the case filed in the tribunal will prompt the local administration to take action against the mining company.

Numerous calls were made to HIL's managing director, Abhaya Shankar for company's response on the issue. A detailed e-mail was also sent to Abhaya's. There was no response from the company.