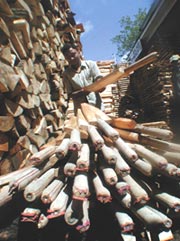 Even as cricket fever grips the Indian subcontinent, manufacturers of Kashmiri bats are on a sticky wicket. The reason for their precarious position: the valley's dwindling willow plantation cover.

"The economics of willow cultivation has spawned the crisis," points out Nazir Ahmad Salroo, the president of the Jammu and Kashmir Sports Goods Manufacturers' Association. While willow fetches farmers Rs 140 to Rs 150 per cubic feet as compared to poplar's rate of Rs 70 to Rs 75 per cubic feet, the longer growth cycle of the former is driving down its production. "A willow tree takes 10 to 12 years to mature. Poplar varieties, on the other hand, attain the required girth in half the time. With the farmers eyeing quick gains, poplar scores over willow," explains Salroo. Experts corroborate this view. "Profitability determines the interests of farmers," reveals P Patanaik, principal chief conservator of forests, Jammu and Kashmir (j&k). Most of the willow plantation in Kashmir is done on private tracts.
According to reliable estimates, there are 25-30 lakh willow trees in Kashmir at present. The manufacturers need 1 lakh willow trees to make 15 lakh bats annually. The state's bat industry has an annual turnover of Rs 30 crore and provides employment to 30,000 people. Additionally, Rs 20 crore is generated every year by exporting 2 lakh willow clefts to other states.

One of the most common species of Kashmir willow is Pinus walichiana . "The shortage of raw material (willow) has created a peculiar situation," laments Salroo. "If the demand is for 100 a-class willow clefts, we get only 50. The rest are substandard because their girth is less than 15 inches -- the prescribed dimension for making good bats," elaborates Salroo.

Cost considerations apart, the unabated smuggling of willow clefts has also contributed to the depletion of the faunal variety. "The demand for willow clefts is very high outside the state. Catering to this illegal segment has become a lucrative proposition for the local people. They indulge in rampant felling of willow trees. Such activities are being carried out in connivance with the enforcement agencies," alleges Salroo.

The principal secretary of j&k's industries and commerce department, A Sahasraman, admits that smuggling is a grey area. "The government has fixed a quota of 2 lakh willow clefts for exporting to other states. Some unscrupulous elements are, however, sneaking out nearly 6-7 lakh willow clefts to the detriment of the local industry. We have now streamlined our checking and monitoring mechanism," asserts Sahasraman.
In order to prevent their innings from ending abruptly, Kashmiri bat-makers are switching over to poplars. "We are now making poplar bats as well," discloses Salroo. This despite the price difference -- a poplar bat sells at just Rs 100, while a willow bat is priced upwards of Rs 1,000. The former is substantially cheaper because poplar clefts are too weak to bear the impact of a leather ball. "Although this product is not in great demand, yet we are making it as a last resort," says Salroo.

For its part, the state government is taking certain steps to increase the number willow trees in the valley. One of the methods being adopted for augmenting willow cover to meet future demand is to experiment with the cultivation of English willow in Kashmir. This a superior variety of willow and its higher tensile strength makes it ideal for cricket bats. Despite English willow's growth span being even longer than Kashmir willow, its better quality is expected to ensure its financial viability.

A proposal to commence large-scale willow plantation in Kashmir is being examined by the centre. Divulging details, Patanaik says that the project envisages the setting up of nurseries where both Kashmir and English willow would be grown. "The report was submitted to the Union government in 2003. We are hopeful that the venture will be cleared this year so that regeneration work can be started as soon as possible," he says. Kashmir's bat-makers, too, hope they will then regain their form of yore.