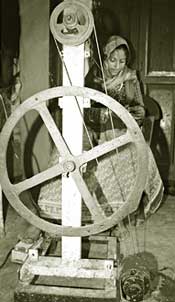 For the Indian public, Kargil brings back memories of war. But here in Tikat village, 11,000 feet above sea level in Kargil, Jammu and Kashmir (j&k), people feel their district will soon be known for the state's first community-managed micro-hydel project.

Their pride is understandable. All the 70 households of Tikat participated in the building of the 30-kilowatt (kw) project, while the state government's science and technology (s&t) department chipped in with a Rs 10 lakh grant. "The Tikat panchayat set up a Village Energy Committee (vec) in October 2003 and some facilitators were chosen to oversee the construction and maintenance of the project," says Yogeshwar Kumar, committee member and civil engineer for the undertaking. vec members went into all the details of the tasks before them, from choosing the site and selecting maintenance engineers to installing household connections and evolving a tariff collection method, before beginning work on the project a year later. The actual building took just two months and was ready by September 2004. "We look forward to many more such projects in j&k", divulges Q Vani, project director.

Similar micro-hydel projects have already seen a fair degree of success in some villages in the hill state of Uttaranchal. In fact, even the process in Tikat was initiated when engineers from Genwali village, in Uttaranchal's Tehri Garhwal district, came to Tikat to train its local engineers. Genwali, a 60-household village 6,500 feet above the sea level, is 15 kilometres on foot from the nearest road. Yet, it is known in the region for producing electricity. The community-run Genwali project, set up on November 12, 2001, was facilitated by Gram Vikas Panchayat Samiti (gvps), a local non-governmental organisation (ngo) and funded by the Foundation for Rural Recovery and Development, a Delhi-based ngo. The project was inspired by the success of an earlier micro-hydel project at Buddhakedarnath village, also in Tehri-Garhwal, that was set up by a local ngo, the Lok Jiwan Vikas Bharti (ljvb).

"Providing electricity by grid requires long transmission lines and is usually uneconomical because the villages here are small and have a very low demand for electricity. These projects are a good option because they require low investment -- between Rs 60,000-80,000/ kw--and the cash-strapped villagers can contribute in labour or in kind," explains Kumar. In fact, around 40 per cent of the total cost is taken care of by way of the skilled and unskilled labour of the villagers involved in the project. "The people in Buddhakedarnath contributed Rs 1,000 per household and 45 man days of labour" says Bachchan Singh, president, gvps.

These small hydel projects are based on good planning and the use of appropriate technology. "We use easy-to-fabricate machinery. Everything -- installation of equipment, penstock, transmission and distribution lines, construction of spillways and overflow channels -- is completed by the villagers under the supervision of local engineers," elucidates Kumar. The other advantage here is that even after the projects are commissioned, they can be maintained by the local people after some initial training. Veer Singh and Chatar Singh, who were trained by Kumar, now maintain the Genwali project and are paid Rs 500 a month.


However, the community micro-hydel projects at Genwali and Tikat do have some problems. For instance, all the households pay a fixed amount as tariff irrespective of their monthly consumption, because the projects still don't have meters. "Everyone in our village pays Rs 30 a month even though some houses have televisions and compact disc players, while others use just bulbs," complains Veer Singh. Although he feels this arrangement is unfair, he can't do much, given the local resistance to meters. Kumar feels matters like tariff and meters need to be sorted out right from the planning stage to avoid these kinds of problems later. The other constraint is that these projects, that were built on a low budget, also have no finances to fall back upon in case of major breakdowns. Nor does the project perform properly through the year. "The water flow is not even enough to run the station to its full capacity from March to June," says Bachchan Singh. Tikat is also facing the same kind of problems.

Rakesh Kumar Gupta, former commissioner in the j&k government's s&t department, feels that these are great development initiatives. But he points out that factors like the location and the local climate need to be taken into account. "The extremely low temperatures at Kargil freeze all waterbodies and thus there is no flowing water to run the power project. This means the plant becomes non-functional in the winter."

Apart from this, Tikat village has not really been able to utilise the electricity generated here for any productive application except for lighting up the village. "Other possible applications, like silk reeling, flour milling, steel fabrication or fruit preservation, are not always possible because the elaborate machinery required for them is unaffordable for these tiny village economies," explains Kumar.

Bihari Lal, president of the ljvb, has a slightly different take on the issue. "It really depends on what the village needs and whether it's able to organise the money for such facilities," he says. The hydel project at Buddhakedarnath, for instance, manages to use its electricity not just to provide basic lighting but also for several income-generating activities like mustard crushing, flour milling, fruit preservation and even for welding activity.

Initially, the Tikat vec had also planned to set up a centralised water heating facility but had to put its plans on hold because of the lack of funds and the difficulties in procuring machines. These problems, generic to the microhydel model, can only be resolved by scaling down the technology.


However, micro-hydel projects have definitely created a buzz of sorts. Despite some teething problems at Genwali and Buddhakedarnath, the gvps is now implementing the micro-hydel model in three other villages in Tehri-Garhwal -- Newalgaon, Pinswar and Medh. Even with the kind of difficulties these projects face, it has become a lot easier for small village communities to initiate and set up such projects. With non-renewable energy sources falling under the jurisdiction of the panchayat -- following the (11th schedule of the) 73 rd constitutional amendment, 1992, relating to Panchayati Raj -- one can expect more such projects.

Across Kargil and Tehri Garhwal, micro-hydel projects have raised hopes. "We also want such a project in our village. It will definitely help our village to develop,", says Sukdei, pradhan of Jakhana village in the Tehri Garhwal district.