House made of thermocol

House made of thermocol 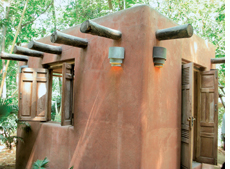 The 'thermocol houses' have braved three monsoons and stand unaffected even today. "In 2002, we were inundated with a pile of Styrofoam (thermocol) blocks from some sewing machines that we had bought. We decided to experiment with them," says Manubhai, one of the three developers of the thermocol house.

The idea was to make a prototype, says Anand Sarabhai of the Sarabhai Foundation in Ahmedabad under whom the three set to work. "The idea was to experiment with the blocks and look for people who could take the idea further and replicate it in newer locales," says Sarabhai. What came into being was a 12 foot and 6 inches long; 9 foot and 9 inches wide; and 10 foot and 9 inches high room, he adds.

"We didn't even know what would come about," say Mansukhbhai and Ramdas, the other partners. "We placed blocks randomly in the form of a rectangle and started stacking one on to the other. There was a hole in all the blocks at the same place. We put iron rods through them and reinforced with cement," they say. A thin layer of plaster completed the walls though a triangular cut-out has been deliberately left to show that it is made up of waste packing material and not bricks or stone.

The completed room stands out as a unit that has two doors and two windows, with two chunks of jaisalmer stone as the floor. The ceiling is made of wooden logs that have been used as rafters and beams to give it both strength and beauty. Sarabhai feels one of the major advantages of this kind of unit would be in earthquake prone areas because even if houses break there will be very less damage to people and property. The other major advantage, he says, is since it is extremely light it can be used to construct second-floor structures. Sarabhai now is talking to architects and designers to explore further possibilities of using piles of waste to produce economically viable and cheaper housing systems.