How Australian aborigines read the weather

The Aboriginal people of Australia have been around for at least 50,000 years, overcoming the most adverse conditions. During this period they have developed a unique lifestyle that lays stress on living in harmony with nature. They believe that things past and present are interrelated, as well as the weather, landscape, plant and animal kingdoms

How Australian aborigines read the weather 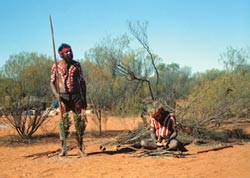 The Aboriginal people of Australia have been around for at least 50,000 years, overcoming the most adverse conditions. During this period they have developed a unique lifestyle that lays stress on living in harmony with nature. They believe that things past and present are interrelated, as well as the weather, landscape, plant and animal kingdoms. These exist in a continuum, with each part having its proper place, distinct meaning and relevance. Climate and weather are considered important on this scale and, according to Aboriginal lore, are controlled by supernatural forces which manifest themselves as nature's quirks.

The Aborigines faced an ice age about 20,000 years ago and it lasted for nearly 5,000 years. Average temperatures fell by almost ten degrees, rainfall decreased and cold, dry winds blew across the continent. What was previously a place of plenty turned into inhospitable territory. It is estimated that up to 80 per cent of the native population perished during this trying time span. But about 14,000 years ago, temperatures began to rise again, resurrecting plant and animal populations. The Aboriginal people could again extend their influence across the continent.

The invasion of Europeans in the late 18th century destroyed much of the local knowledge in south and east Australia. But the weather culture of the Aboriginals of central and northern Australia has survived. This knowledge consists of an intimate understanding of plant and animal cycles and the intricate connections between them, as observed by the natives over thousands of years and handed down from generation to generation. This knowledge records how various plants and animals react to the weather around them. But the most informative are the observations which predict seasonal expectations (see box).

Other examples are far more indirect, but reflect the Aboriginal philosophy of interconnectivity of phenomena and their belief that such delicate natural linkages reveal much about climate and weather.

The Aborigines also showed exceptional ability to link such natural cycles, enhancing their understanding of seasonal events. They studied the reaction of plants and animals to changes to gauge the environment. For example, to the Gadgerong people, the presence of march flies indicated that crocodile eggs could be found, honey was available, and the approach of the late dry season.

The origin of the serpent stories may be the fact that most snakes are found in the vicinity of permanent water. To the Walmadjari people of the deserts of the Northern Territory, the carpet snake embodies the spirit of water. Carpet snakes are known to die out soon if they are deprived of water and are almost always found near water sources.

Australia's diverse terrain includes monsoon tropics, desert, savanna, alpine and temperate regions. The Aboriginal people of Australia inhabited these distinct ecologies. Their survival depended on detailed knowledge of the local environment. The resulting meteorological view is one of great diversity. Seasonal cycles as described by the various Aboriginal peoples differ substantially according to location. This gives us a far more intricate and subtle overview of Australia's climate than the uniform four-season European description applied across the continent.