How do we view the Bawaria community?

Are the Bawarias of Rajasthan hunters, nomads or a tribe of criminals?

How do we view the Bawaria community? 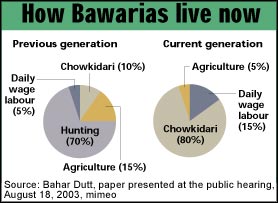 Bahar Dutt is a young wildlife researcher travelling through Rajasthan. There she meets some Bawarias -- one of the 200-odd notified tribes of India. The empathy is immediate and natural. She doesn't walk by, but stops to take a hard look at their condition and is repulsed by a system that pushes the tribe to the brink -- homeless, jobless and at the mercy of a society that deems them guilty unless proven innocent. Dutt, along with friends and funding agencies, decides to hold a public hearing to give ear to the plight of Bawarias. A date is set to present testimonies -- August 18, 2003, at the India Habitat Centre, New Delhi.

For the uninitiated: public hearings are not a legal recourse but a poke at society's morals. A strategic tool to reach out to an audience in hope that it would lend a sympathetic ear and exude anger and/or anguish. Set up a panel of eminent persons, and hold the hearing to list and narrate grievances. Ensure the presence of mediapersons, who convey this anguish to the powers that be and shake them from ennui. For the Bawarias the hearing seems to have worked. It moved the president of the country to enquire about the status of the tribe. It also moved the Rajasthan state police, claims a local ngo, to burn hutments of some Bawarias after a post-hearing lashing by the electronic media against the government's callousness.
The discomfiture of a staged event is palpable. A number of Bawarias, in an alien ambience, stand against the mike to narrate stories so ingrained in their minds (like the habit of crime?). The clumsiness draws guffaws from their own clique. Tired of their voices and sympathetic nods, they want to go home.

But before this, Dutt herself had begun defensively. The usual cynic's barbed comment on the multi-storied chic venue, hundreds of miles from the arid countryside the Bawarias want to inhabit, has pricked her. It needn't. The comment comes from an audience that shares the discomfiture. The discomfiture of admittance -- that it is clueless and yet influential. It acknowledges its role in this theatre by its head-nodding presence. But won't admit that it has usurped the role of the decision-maker. Urban India holds court over the lives of 30,000 strangers. The Bawarias may or may not win this battle, but the idea of a democratic India suffers a blow every time a defunct system forces them to plead for basic human rights: not as a matter of course but as an exception -- because the audience shook its head, at a staged event, in venerable empathy.