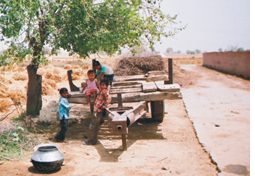 Residents of Panihari village are a happy lot. They are celebra-ting freedom from floods for the first time in living memory. Agricultural wages have increased across the district in the past one year. They say their lives have improved because of the National Rural Employment Guarantee Act (nrega).
Utilising the 'employment' opportunity that came their way through nrega, residents of Panihari in Sirsa finished constructing a 2-km embankment on the Ghaggar river in February this year.

"Life was hell with the Ghaggar flooding our homes and fields every monsoon. The need to restrict the river was there for long. But we lacked consensus. Rich landowners don't suffer because they have an embankment on their side of the river. Only small time farmers and the landless have suffered," says Mandan Lal Panihari, a 38-year-old resident of Panihari.

The embankment's height was raised on one side of the Ghaggar by the irrigation department in the late 1990s. "Wealthy landowners consented to give part of their land for the embankment. This aggravated the problems for people staying on the opposite bank," says Rajendra Kumar, a resident. In 1999, however, the villagers had sought a stay on the government's plan to raise the height of the embankment on the other side (where the new embankment has come up now) fearing loss of their land.

But, with nrega in focus, the villagers took it upon themselves to build the embankment. Compensation issues were settled internally. The panchayat allowed concessions to landowners who were losing a part of their land. They were allowed a share from the panchayat's land and in a few cases, people shared their land with the groups affected, say villagers.

"The panchayat has been proactive in taking the lead to inform people about nrega. Job cards have been duly issued and payments made. Sometimes the panchayat has paid wages out of its own pocket to people in need," says Mashi Ram, 40, one of the village's below-poverty-line cardholder.
Agricultural wages stood at a meagre Rs 56 per day before nrega was introduced in the area in February 2006. With the programme on its feet, the minimum wages were settled at Rs 96. Rich landlords, unhappy with the development, tried to stall the proceedings and presented a petition to the deputy commissioner, demanding a reduction in wages.

"They threatened the villagers with dire consequences and warned that there would be no work when the government programme got over," says sarpanch Sona Ram. "But we were firm and they backed out. nrega functioned smoothly with the full cooperation of the panchayat and the district administration," says Maya Devi, a resident. Consequently, local labour flourished.

There is euphoria in the village now. "With the focus on employment generation, the act targets poverty directly. It caters to all sections of society," says deputy commissioner V Umashankar. Pankaj Yadav, the additional deputy commissioner, agrees. "Sirsa is covered by a good canal network from the Bhakhra Nangal Dam. People are not really worried about productive asset creation. It is important to generate employment within the village and raise the overall wage structure," he says.

The mood in the district headquarters is quite upbeat with similar success stories coming to the fore and their documentation, at present, is underway. Kaluwada, a village further upstream on Ghaggar, finds mention in most quarters for its works done under the employment guarantee scheme.

For instance, a 3-km irrigation pipeline was laid in the village. This was done to irrigate panchayat land. Besides, two johads, traditional water harvesting structures, were also dug for animals.


Of the total fund allocation of Rs 30 crore for 2006-07 to the district, Rs 22 crore has been utilised so far. Villagers have dug up a number of tanks. A majority of the works under nrega in Sirsa fall under rural connectivity or roads (22 per cent), followed by land development (21 per cent), water conservation (18 per cent) and micro irrigation (17 per cent).

Almost 67 per cent of the works are still under operation, since the programme could take off only in July-August, 2006. But the level of achievement is commendable nevertheless, say the officials.

The district administration plans to ask for Rs 50 crore for the current financial year. And chances of their demand being turned down appear remote.