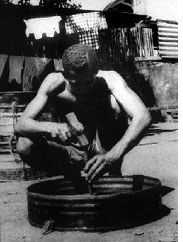 In the summer of 2007, Shell officials at the Caribbean island of Trinidad and Tobago were in a spot of bother. Business was fine for the oil company and environmentalists and other usual gadflies weren't making much noise. But the Shell factory in Barracones Bay was confronted with an awkward demand: musicians planning to play at the cricket world cup wanted oil barrels. The oil company wasn't caught unawares though it had faced a similar demand a year earlier, during the football world cup. Barracones Bay honchos had learnt an important lesson in Trinidadian culture then about steelpans. Crafted from oil drums, their lilting melodies were as essential to spectator sport--indeed all celebration--in the West Indies as rum and dancing.

Many Shell officials denied the association."Our drums are disposed of properly, and Shell's health and safety rules prevent the use of empty drums for anything but Shell oil products," William Rosales, the manufacturing engineer at Trinidad's factory told the daily Trinidad Guardian. Shell wasn't always this uncomfortable with musicians beating its oil barrels. In the 1950s, the company put one of the early innovators of the steelpan, Elie Mannette, on its payroll. This was to stop him and his friends, Birdie Puddin and Cobo Jack, from stealing Shell's empty and toxic oil drums.


Steelpan music has its roots in the tradition of drumming that enslaved people brought with them from West Africa. Trinidad became a British colony in 1797; the British feared the drums would foment revolt by transmitting coded messages from one sugarcane plantation to another. Besides, the Anglican Church wanted to dissolve African religions and cultures. So drums were banned, and descendants of slaves were forbidden to practice their religion or to speak their own language.

Not to be denied expression of their traditional rhythms, they crafted makeshift drums from hollow bamboo. In the 1930s, Trinidadian bands began to incorporate metal objects like garbage can lids, pots and pans and biscuit tins because these objects were louder and more durable than bamboo.

Legend has it that in 1942, a 12-year-old boy Winston Spree Simon lent his metal drum to a friend. When it was returned it had been beaten into a concave shape and had lost its special tone. Hammering the drum back to shape, Simon noticed the pounding created different pitches or notes. He went on to create four distinct notes on his drum and could now play melody instead of percussion. The steelpan was born.

Many historians doubt this story. But there is no disputing that Simon was an early pioneer of the melodic steel drum. In 1946 he developed the 14-note pan using old drums left behind by the British navy that had made Trinidad its base during World War II.

This was also the time when Shell set up shop in Trinidad. For Simon's friend Mannette, this was a heaven send. He hammered discarded oil drums to produce an instrument capable of playing sophisticated melodies. Modern pan makers rigorously follow Mannette's system in crafting any of the nine drums that make up the steelpan family. The barrels are first sliced according to register, from soprano to bass. Then, using a selection of rubber and metal mallets, blenders stretch the thickness of the metal top to create a concave drumhead capable of producing anywhere from three to 30 notes. In Trinidad, a steelpan costs about us $600. And should they carry the Shell sticker--which the company tries its best to remove--add another hundred.

Mannette remained with Shell until 1967, as a sales manager, steel-drum maker and leader of pan band the Shell Invaders. He went on to become the artist-in-residence and then a professor of music at West Virginia University in the us . Another Shell Invader, Malcolm Weekes, received an annual us $2,000 scholarship to attend university in Washington, where he played the double alto for the school's Trinidad Steel Band and graduated with a degree in chemical engineering. "We had bonfires to burn out all the crap stuck inside the drums. It was dangerous work. We inhaled the fumes. But what the barrel contained also helped define the sound of the drums," the former Shell Invaders' star was to reminisce later.

Shell company archives, however, make no note of this band the company help found. Or any steelpan music at all. For the company they are almost relics of a past embarrassment.