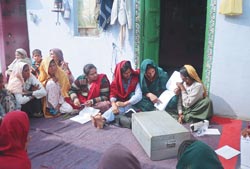 They are a force to reckon with, the Meo-Muslim women of Chandoli village in Alwar district of Rajasthan. Despite using the same ingredients for developing self-help groups (shg), the village-based shg and its government-run counterpart produced totally contrary results. The former, inspired by non-governmental organisation (ngo) Ibtada, did good work and elicited much praise, while the latter failed to take off altogether, inviting flak.

The idea behind this was that shgs would sustain and maintain the assets created in the watershed programmes in the villages even after the government withdrew support. The setting up of savings and credit units would help in the timely availability of credit required for the maintenance and repair of the structures.
The groundwork for building up the shg network as a component of the central government's much touted National Watershed Development Programme for Rainfed Areas (nwdpra) began only in the third year of the programme in 2000, while the capacity building work was officially supposed to start in 1997 and carry on for a period of five years. The concerned government department had hastily put together two units as part of the routine exercise for watershed programmes. End result: nil. According to Khube Ram, who headed a unit of the shg, what started as an effort to establish micro credit units for poor and marginal farmers could barely survive six whole months. The nwdpra programme could only form two shgs which now cease to exist as against the eight village shgs.

There was a startling difference between the two credit clusters. "The women focused on livelihood issues that are of real concern to the people of Chandoli. Their activities were need-based and the villagers were involved as proactive partners," says Rajesh Singh of Ibtada. Loans from the Punjab National Bank were given out to members. Loans acquired at an interest rate as low as 10.5 per cent were offered to the villagers at 24 per cent interest. This became their primary source of income.

"Some needed money to buy livestock, others to set up tailoring shops or smaller trades," says Khatuni, member of one of the women's groups. The 83 families involved in the running of the shg had accumulated over Rs three lakh as current savings, while the nwdpra-run shg could barely gather Rs 5000 from one of the two groups.

The failure of the nwdpra-run shg is not easy to miss. "The government officials never took the villagers into confidence when they structured the groups. So the locals did not develop any sense of stakeholdership or any confidence in these units," explains Hiralal Sharma, director, Sahyog Sansthan, an Udaipur-based ngo.

In fact, the shgs were viewed with suspicion. "Rumours spread that the government will 'eat up' the money invested by the villagers," says a rueful Khube Ram. With no efforts made by the officials to interact with the villagers, the differences grew and the shgs faded away. This despite government records stating that two per cent of the total project fund of Rs 66 lakh, allotted for such "capacity building' activities had been spent to the last penny!
Singh says that gaining the confidence of the people of the village initially proved to be a tricky affair. To begin with, the majority of the population were Muslims and did not hold the business of credit very favourably. The fact that it was a socially backward region, with poor literacy levels made things still difficult.

Thorpughly professional, these women scrutinise every loan application. Their transparency at work has given them credibility. But judicious handling of credit is not the only feather in their cap. Their anti-alcoholism campaign in Chandoli today has the support of the local administration. Development analysts in Rajasthan see this as a significant trend.

The shg is now an institution by itself. It introduced a new idea of development, namely, looking forward and thinking lateral.