Telangana plans to first empty Hyderabad's great lake and then refill it with rainwater. Experts say it is nothing but a harebrained plan 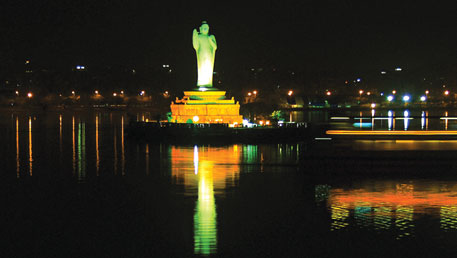 Call it his farsighted idea to restore the health of a lake or plain blunder, Telangana Chief Minister K Chandrasekhar Rao is determined to clean up the fabled Hussainsagar first by emptying it and then refilling it with rainwater. In February, Rao directed the Greater Hyderabad Municipal Corporation (GHMC) to start pumping out the water and clean the 16th century lake before monsoon arrives.

While the authorities are yet to begin work, conservationists say it is an impractical venture. For one, emptying a lake that spans 141 hectares with a depth of over 500 metres is a humongous task, says Jasveen Jairath, founding convener of Hyderabad non-profit Save Our Urban Lakes (SOUL). Removing 22.6 billion litres of water requires round-the-clock pumping for up to 50 days, admits an official of the Hyderabad Metropolitan Development Authority (HMDA). This translates into hundreds of crores of rupees (see ‘Impractical clean-up plan’ on p21). Since the government is yet to make public the detailed project plan, no one knows where and how the lake water will be released. Conservationists say the water may be released into the Musiriver, that flows 9 km south of the lake. In that case, the murky water of Hussainsagar will further pollute the Musi, the water of which is not fit for bathing, say SOUL activists.

“We have emptied and refilled small ponds in Kolkata to restore the health of the water bodies,” says Mohit Roy, environmentalist and president of Kolkata-based non-profit Vasundhara. But using the method to restore the health of Hussainsagar seems impractical. Ecosys- tem of small ponds is simple while that of lakes is complex. Pumping out Hussainsagar requires a complex management of the biodiversity of the lake, Roy adds.

Cleaning up the lake through this crude method is infeasible for another reason: it involves dredging out the sludge that has remained deposited on the lake bed for over 450 years. SOUL estimates that the lake built by Ibrahim Quli Qutub Shah of Qutub Shahi dynasty for providing drinking water to the city could be holding 4.4 million cubic metres (cu m) of sludge. Given that earth-movers can dredge a maximum of 1 million cu m of sludge per year, it would take four years to complete the task. For transporting this amount, 220,000 trucks, each with a capacity of 25 tonnes, need to be pressed into action. 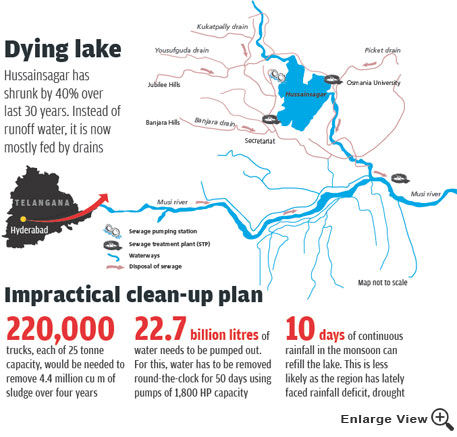 Besides, de-silting is not a simple process, warns Hyderabad-based environmentalist K P Reddy. It is not feasible to de-silt immediately after emptying the lake as high moisture content of the sludge would not allow movement of earth-movers. Since physical and chemical composition of dredged material is complex, Reddy suggests that the government should conduct scientific studies about its properties, identify stabilisation mechanism, and then specify the mode of disposal. If disposed of without protective lining, hazardous wastes and faecal matters present in the sludge would contaminate surface water and groundwater.

But such a scenario seems unavoidable as there is little coordination between GHMC, responsible for keeping the lake water clean, and HMDA, which works on catchment restoration. The Superintendent Engineer (Lakes) of HMDA, B L N Reddy says GHMC has not kept his department informed about the restoration plan of Hussainsagar.

Shailendra Joshi, principal secretary of the Irrigation Department, cites another reason why Rao’s dream project would fall flat. Filling the lake only with rainwater is impossible as most of the runoff gets obstructed due to poor drainage network in the catchment. Joshi’s statements are corroborated by a study by Rammohan Reddy of Jawaharlal Nehru Technical University (JNTU), Hyderabad, who found that the lake’s surrounding area does not have a good network of stormwater drains. Even if HMDA revives the entire catchment and redirects the runoff towards the lake, Down To Earth’sassessment shows it will take 10 days of continuous rainfall in the monsoon to fill up. But this is less likely as the region is increasingly suffering from rainfall deficit and recurrent droughts.

Moreover, chief minister Rao’s dream to restore the health of the lake is likely to remain just that—a dream—unless the authorities manage the flow of municipal solid waste from surrounding residential and industrial areas (see ‘Dying lake’). Every day, 78 million litres of sewage and 15 million litres of industrial effluents flow into the lake through four drains, as per Andhra Pradesh Pollution Control Board (APPCB) data of 2012-13. The two sewage treatment plants (STPs) near the lake are insufficient to handle the wastewater load, say SOUL activists.

So, instead of undertaking an ambitious project, the need of the hour is to understand what plagues Hussainsagar. In last three decades, the lake has shrunk by 40 per cent, primarily because of encroachment by both public and private agencies, according to non-profit Forum for a Better Hyderabad. To save the lake, conservationists, including K L Vyas, convenor of Save the Lake Campaign, have moved the High Court of Andhra Pradesh several times, but to little avail.

In 2000, the Hyderabad Urban Development Authority issued a notification to protect the lake, but there have been instances where it gave in to the real estate lobby and allowed residential colonies on the catchment. In 2006, HMDA initiated Hussainsagar Lake and Catchment Area Improvement project and set up STPs and wastewater interception and diversion structures. It also installed fountains to aerate the lake to improve its water quality. But these measures are lying defunct. Maybe, Rao should revisit these unfinished plans first.