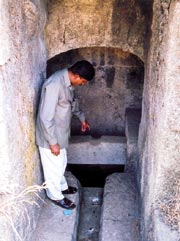 In these times of water scarcity, it is perhaps salutary to look at water systems built in the past. In February this year, one such system, dating to the eighteenth-century, was uncovered in Pune, Maharashtra. While this 15-kilometre long, 30-feet deep, 5-feet wide underground waterbody was not exactly unknown, it had almost receded from public memory. The credit for re-discovering it goes to a team comprising water contractors Shrikrishna and Sriram Bhagwat, their friend Nandkumar Bangude and journalist Sharad Lonkar.

This underground duct, commissioned by Peshwa Baji Rao ii in 1749, functions even today. It is quite an intricate system comprising two lakes, dams and canals. During monsoons, the smaller of the two lakes, Ambil Odha, gets water from a canal also called by the same name. This water is blocked by a 600-feet long stone dam and seeps into the larger second lake, the Katraj. Here it is checked by a 1,000 feet long stone dam. Katraj is also serviced by many natural springs. Both dams have small gates at the base, which are presently closed. In the past, they were used as sluice gates, to release excess waters back into the Ambil Odha canal. From the Katraj, water flows down to an underground canal, which takes it to Shaniwarwada -- the erstwhile Peshwa headquarters in the heart of the city.

In 1879, the Pune municipality took over the city's water supply system and from then began a gradual decline in the use of the Katraj system. In 1880, the municipality built a dam on the Khadakwasla lake; this waterbody has become the main source of Pune's domestic water supply. In 1881 -- a year after the dam came up -- only 967 of 12, 271 houses in Pune city used water from the Khadakwasla lake, which came through taps. The majority continued to use the Katraj lake waters via the Peshwa underground canal. But by 1915 things had changed: that year, Pune city was supplied as much as 750 lakh gallons of water by the Khadakwasla dam through two open canals, while the Peshwa underground canal system supplied only 7 lakh gallons.

In 1933, Pune's civic authorities diverted the Peshwa canal water to a lake in the Swargate area of the city through a 24-inch pipeline. After this, the Katraj lake was able to supply as much as 60 lakh gallons of water to the Swargate lake during the monsoon season. This water was supplied to Pune's residents whenever the Khadakwasla canals were closed for repairs. As recently as 1970, the Katraj lake waters were being supplied to residents living in Bibwewadi and Sahakarnagar -- two eastern suburbs of Pune. In fact even today, farmers tap water from the underground canals, so do many families in the old city areas.

But modern day construction activity along the canal's route has resulted in many outlets being submerged. Shriram and Shrikrishna Bhagwat, however, contend that the canal system can be revived. Says Sriram Bhagwat, "The water level in the canal is about 5 feet deep and the flow is quite adequate."

The media coverage in the aftermath of the rediscovery of the canal prompted Pune's mayor, Deepti Chaudhari, to form a committee to see how best the canal system could be preserved and used. Says Chaudhari, "The system is undoubtedly unique. I am keen that we preserve it." Adds V G Kulkarni, an engineer with the municipality and a member of the canal revival committee, "Once we have ascertained the water depth and availability, we will explore ways of using the water for our civic gardens and construction sites."

The team which uncovered the Peshwa canal system has also made a list of recommendations to the municipality for reviving it. However, only time will tell how seriously the civic body takes up this project.