The Madhya Pradesh government's decision to call in the private sector to convert state forest lands into captive plantations, impinges on people's rights over common resources 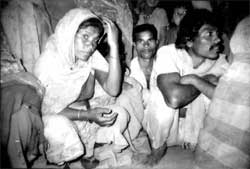 a proposal to give state forest lands to industry as captive plantations is creating a storm. The Madhya Pradesh (mp) state ministry of environment and forests has -- through the mp Rajya Van Vikas Nigam (state forest development corporation) -- invited tenders from private entrepreneurs. The parties shall be given these lands on a contract basis for a 30-year-period. The proposal covers 3,500 ha of forest lands in the four districts of Rajnandgaon, Chindwara, Betul and Seoni.

Kamal Nath, the former Union minister of environment and forests, had introduced a similar plan in August, 1995. The apparent reason for the move had been the raw material crisis being faced by the paper and pulp industry. But fears of a backlash from the people had forced a withdrawal of the proposal, just before the 1996 parliamentary elections.

Digvijay Singh, the mp chief minister defends the current move: "The proposal does not take away people's nistar rights (rights over minor forest produce) and will create rural employment. Industry will now be involved in the afforestation of degraded forest lands. Also, five per cent of the raised plantations shall be given away to the local communities."

But the proposal faces heavy criticism as it will bear socially and environmentally-disastrous consequences. Its provisions have been accused of bypassing the real issue of empowering communities to assert their rights over forests. Opposition has poured in from a number of quarters which include local organisations, environmentalists, politicians and legal experts.

Gautam Bandopadhyaya of Ekta Parishad, a network of local organisations working in mp says, "This is a concerted move on the part of the state government to displace people from forests. The proposal reduces adivasis - the real custodians of the forests - to cheap labourers, stripped of all rights, while forests get usurped by industry." Local organisations have planned dharnas (sit-in demonstrations) and mass rallies against the move. "We will not allow industries to step into our forests. A mass agitation shall be launched," warns P V Rajgopal of Ekta Parishad. At present, a public interest litigation has been filed by local organisations in the Jabalpur High Court.

A joint statement issued to Jai Narain Prasad Nishad, Union minister of environment and forests; by M S Swaminathan, agricultural scientist and former planning commission member and Anil Agarwal, director of the Centre for Science and Environment (cse) said, "The land that will be given for captive plantation is used as common lands by millions of poor to meet their basic needs of fuel, fodder and timber."

Environmentalists are of the opinion that industry's needs could be met through farm forestry. They fear that the proposal will affect the wood market and farmers growing trees on private lands will suffer losses if companies get access to captive raw material.

In the '80s, despite the encouragement to farm forestry, the government had allowed cheap import of wood, apparently to save Indian forests. The flow of these imports into the local markets had spelt doom for farmers. Companies had found it profitable to purchase imported wood and the markets crashed. The nearly five million ha planted with 10 million trees under the farm forestry programme had no takers. Citing this example environmentalists argue that farm forestry, supported by industrial demand, could generate far more employment than captive plantations. They also believe that the move will create a regressive precedent and open the floodgates to similar projects in other states. cse is organising a debate on the issue in Bhopal. Digvijay Singh, mp forest officials, industrialists, environmentalists and non-governmental organisation (ngo) representatives from the region shall be participating.

Legal experts are also questioning the state government's plans, which have been taken without prior approval from the Centre. State officials, however, point out that the proposal does not entail the 'leasing out' of forest lands but gives it to industry on a 'work-contract basis' and hence a prior approval is not needed. Environmentalists have dismissed this clarification because they feel that for all practical purposes, there is no distinction between the two. Disagreeing with the state government's view and resisting the proposal in Betul district, Anil Garg, an advocate and activist of the Satpuda Kisan Mazdoor Kalyan Samiti, an ngo says, "The move is in violation of the provisions of the Forest Conservation Act (1980) which makes the prior approval of the Central government necessary for assigning any state forest lands by way of lease or otherwise, to a private person or agency." According to former chief justice of the Supreme Court (sc) of India, P N Bhagwati, the move has also violated the fundamental right to life and livelihood, as enshrined in Article 21 of the Constitution of India.

Environmentalists allege that the proposal flouts the letter and spirit of the National Forest Policy (nfp, 1988). The policy categorically says that state forest lands shall not be given to industry, which should look for wood from private sources. cse has filed a petition in the sc, urging it to quash the captive plantation proposal and give a directive to the Union and state governments to implement the nfp of 1988 in a time-bound manner. The petition also requests that the Centre be directed to frame and implement a policy to encourage the planting of trees on private lands with a view to achieving the declared "national goal" of bringing "a minimum of one-third of the total land area of the country under forest or tree cover".

Referring to the nfp of 1988, Saurabh Prakash, the advocate arguing cse's case in the sc says, "the reason underlying the policy directive is that past experiences have shown that giving forest lands to industry has been ecologically disastrous. If the government still continues with it, it is indulging in something destructive." The recent sc judgement (see news page 19) banning any state government from allowing commercial activity on state forest lands, without prior approval of the Central government, may have implications for this proposal.

The proposal has also been challenged by senior members of the Congress party in the state. Dileep Singh Bhuria, a tribal Member of Parliament says that "Adivasis of the state will be badly affected by the move." As for the Central government's stand on the issue, even though Nishad has declared that "We (the Central government) will not give state forest lands to the industry," it has done precious little to stop the mp government's move.

While the greens have a strong case with the nfp of 1988 and are backed by the locals and their representatives, industry has also been wooing politicians and bureaucrats for support. In an annual general meeting of the Indian Paper Makers Association held on October 11, in New Delhi, Harsh Pati Singhania, the chairperson of the association reiterated the industry's demand for captive plantations. The stage seems set for a confrontation between the protagonists and the antagonists of the move.