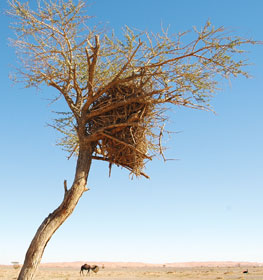 Waves and ripples at a distance. A promise of relief for the parched throat. A herd of camels splash and spill water under their hoofs. We reached them after a long drive. But there was not a drop of water. The camels hesitated a moment, then continued their trudge. At some distance, again water splashed under their hooves.

A lakeshore. Waves were playing tender music. Some animals, huge as whales, were resting by the lake. Some vessels seemed to have anchored there; but we could not say if they were ships or boats. Some people were bathing; some washing. Slow down, or the car would plunge headlong into the lake, warned somebody. After that we drove a whole day but did not reach the lake.

We had been travelling through the Dehna desert in Barak-al-wadi in south western Saudi Arabia. Eight days and eight hundred kilometres later we got used to hallucinatory experiences--the deep gulf of mirages, the phenomenon that gives psychedelic illusions of pools, lakes and puddles.

The tantalizing illusions of wetness-- suraab in Arabic--came alive when the sun got hot. The interplay of sunlight and hot air spread the illusion of undulating water on the desert's wide canvas. It became more appealing at noontime, and disappeared just before sundown.

Lone trees appear occasionally in the Dehna. The interplay of these trees and their shades takes on the guises of islands, wharfs and whales.


A fellow traveller spotted an eagle's nest. It was a miniature of tree-houses--very large. It was built using leaves and twigs of thorny trees, and pieces of plastic. (Wherever man goes, plastic goes with him.) The nest also had hefty nails that held on strongly to the branches-- superb design to survive high-winds and simooms.

We kept our route far from human habitation and highways--as far as possible. We had enough preparation. We had marked Dehna on Google Earth (2002 update) and transferred it onto the GPS (Global Positioning System) attached to our caravan. Seven years had wrought some changes to what was marked on Google Earth; but those were not drastic enough to mislead us. We also had a good map; and two among us were good map readers.

I have gone into details of my travel paraphernalia because I am reminded of a tragic incident. In 2001, two youths from Kerala attempted the same journey. But they were ill-prepared. The desert claimed them. One of our fellow travellers was among those who reclaimed their bod- In mirage country ies. The two youths had gone to erect mobile phone towers. Hoping to finish the work and return soon, they did not take much water with them. Their vehicle got stuck in the sand. It was not a four-wheel drive vehicle and the two did not have satellite phone or GPS.

After this tragedy, the Saudi government made compulsory for the companies to provide GPS and other amenities to those who go installing towers.

We had travelled 110 km from the Saudi capital Riyadh to Al Kharge before driving into the desert. Not long into the desert, we saw a small tower of stones. Every passerby had placed one stone upon the pile and it had grown taller than a man. The pile is a signal encouraging newcomers to go along.

The chase of mirages exhausted us by the end of the day. We had to find a place safe from snakes and scorpions and having enough firewood, and fix the tent before light was gone. Then it was time to light the campfire. Like all desert travellers, we used the campfire not just for cooking, but also to fight the bitter cold.

Mobile phone networks were available, but only sparsely. For many days we could not know what was happening in the outside world. Nomadic life. Every night during our journey, the temperature dipped to 2 Celsius. After our return, we learnt it had even slid down to minus values.

The tents were set in a manner that we could see the sunrise.
We had passed through four villages. In all the four, Bedouins had the same question: Jawaal walla Aramco? (Are you labourers of mobile companies or are you employees of Aramco, oil company?) For villagers in the deep desert, these two are the only visitors from the outer world. They were not satisfied by the answer that we were muzafireen (travellers). "What is here for the city people to see?" they asked.

Once convinced, they extended an affectionate welcome. They offered us tea and insisted we stay with them for a day. When we apologized and said staying would upset the travel schedule, they scolded us lovingly. Soon our hosts were busy preparing mutton dishes.

Bedouins are like that. They feed travellers to the full, even if they are strangers. Then they give them mats to rest. As we stretched our limbs an elderly Bedouin enquired about our travels.

His wizened face would often break into a smile. Adeeb was in his 90s and remembered the times before technology changed their way of life. Bedouins used to identify directions and routes by looking at the colour and design of sand dunes, he told us. When the mirage tried to betray them, they fixed their eyes on the sand. If the water was near, the sand would have a tinge of white. In regions with heavy winds, it would be thin and light.

Adeeb's legs were in a cast and he was visibly in pain. He explained his young driver had no use for his wisdom. Once while they were travelling across sand dunes, the driver tired of chasing mirages did not pay heed to Adeeb's warning about a waterbody ahead. The vehicle plunged into the water and overturned.

In the villages we saw Bedouin women driving cars. In Saudi Arabia women are not allowed to drive. 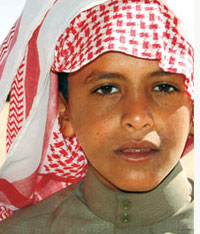 After a week, we were at the end of Barak-al-wadi. It was time to hit the highways. A little distance from the highway on a sand hill were perched wild falcons--more than 20. Not far away, there were some vultures.

In the desert, domesticated falcons do for men what hunting dogs do in other places. They trace animals like rabbits and lizards; they can also fly with these animals. We had seen falcons used in desert hunts. We had also seen breeding centres where they are sold. But it was the first time, we were seeing wild falcons. They were at a distance. Our camera got only very long shots. By the time we mounted the tele lenses, they were gone. Perhaps, some day we could go to a settlement of falcons, we consoled ourselves.