In the pay of plastics

In the pay of plastics 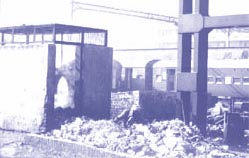 the sale of tea in mud kulhars by chaiwallahs up and down the country to the 11 million passengers who daily travel by train, has been - like so many of India's indigenous cultural habits, a guarantor of sustainable living, and a model for the industrialised world.

The mud kulhars are made by small-scale regional cottage industries out of local materials, sold to small-scale tea sellers as the receptacles to hold their locally brewed beverage, and thrown away when the tea has been drunk. Composed as it is, of mud, the kulhar quickly biodegrades back into the earth onto which is thrown. No waste, no hassle, no problem.

No more. Labouring under the impression that 'industrialised' means developed' and 'agricultural' equals 'developing', certain of India's government representatives seem bent on subverting traditional and ecological ways of living by encouraging the country to jump on the western world's bandwagon of plastic dependance.

In 1986, the then state minister for railways Madavrao Scindia recommended that all railway kulhars and leafplates should be replaced by plastic versions. At the time, the far-sighted Nisheeth M Katara, who now works for the Inland Waterways Authority for the ministry of surface transport, but was at the time officer on special duty to the Union railways minister Mohsina Kidwai, filed an objection to the proposal, which Kidwai endorsed. The matter would have ended then and there, but unfortunately in the following week Kidwai was shifted to a different portfolio, and Scindia was able to quietly reverse her decision and pass his proposal with no further fuss. As a result, and as any modern traveller by train will tell you, India's railway tracks are now littered with plastics, like so much wedding confetti. Along with the ubiquitous Polyethylene terephthalate (pet ) mineral-water bottle and coloured Low Density Polyethylene ( ldpe ) carrybag, an early morning rootle around New Delhi Railway station revealed that the main culprits of the plastified track are the modern type of tea cup - which come in paper versions, polystyrene, and Polyvinyl Chloride ( pvc ).

Contrary to popular belief, paper cups of the type dispensed by vending machines are slow to biodegrade because they have to be waxed or coated with polyurethane for them to withstand hot liquid. The Railways now use 150 ml polycoated paper cups in their station restaurants and pantry cars, which are imported to India by the American firm International Paper usa. These cups are burnt next to the track.

Non-biodegradable plastic presents a different problem. While 60 per cent of India's plastics are collected for recycling in shanty factories, with each refabrication the quality is debased. Bharati Chaturvedi, environmentalist from the Delhi-based ngo Chintan, insists that plastics are in fact not re cycled but down cycled. The proof lies in the abundance of thin plastic bags strewn across the country, which are so flimsy that ragpickers don't bother collecting them. Indian farmers now complain of disruption to agricultural drainage systems caused by waste plastics trapped in the soil. India's urban areas face the burgeoning problem of clogged sewers and drains. All virgin plastic production contributes to this situation (see box: Plastic politics).


Railway minister Nitish Kumar reacted to the public's changing attitude to plastics by reversing Scindia's pro-plastic policy in May 1998. The public relations departments of the regional railways are under the impression that plastics have been banned on all trains and stations since June 1999. But the ministry's catering department has recently begun a surreptitious reintroduction of plastics - this time under the guise of the super utilitarian term 'eco-friendly'.

In his circular of June 2, 1999, director of catering Yogendra Sharma blithely trumpets the replacement of metal thalis with 'eco-friendly disposal material'. Sharma keeps samples of such material in a large cupboard in his office. There is a dazzling range - polystyrene and aluminium casserole dishes, plastic pots and one Virgin Atlantic airline food-tray. From this wide selection, it is the latter, plus appropriate pots (plastic for the upper classes, aluminium for the lower) which have been chosen to supplant the thali.

According to New Delhi base kitchen's chief inspector of catering Anil Kumar Ahlawat, metal thalis have been put into storage and each of the 16 national 'base kitchens' which supply all the hot food for India's running trains, now have to pack rice, daal and vegetables into throwaway aluminium casseroles, and salad into paper cups with plastic tops.

The plastic used for the trays is apparently eco-friendly because it is acrylonitrile butadiene styrene ( abs ). It is indeed a durable form of plastic, so it can be reused, but it does not have an infinite shelf life and is not easily disposed of once defunct. British Airways discard their food trays after 80 uses. As SK Malik - former catering director, and now head of the newly-created Indian Railway Catering and Tourism Corporation Limited admits, since the trays have a limited shelf life (he estimates 20-30 uses) the new plastic policy is indeed a 'problem'.

Sharma's circular makes it patently clear that phase one of the new catering policy is already causing environmental pollution. Apparently there have recently been complaints about the pantry staff's dumping of the 'eco-friendly' disposable material ('empty casserole containers, mineral water bottles/ pouches, glasses, and cutlery, napkins') at the side of the railway track. Sharma's solution, in his eight-point circular, has been to order the collection of the material in plastic bags, which are then placed in plastic dustbins, secured, and left at stations to be cleared by municipal corporation staff. No mention is made of separation of garbage into its recyclable constituents. The policy simply generates more plastic waste, says Chandra Bhushan, coordinator, Green Rating Project, Centre for Science and Environment, New Delhi.


Into the fray steps a Dutch company De Ster, which currently supplies over 400 of the world's airlines, including British Airways and Lufthansa, with flight catering equipment.

With a population of more than one billion, India is a country which can no longer be ignored by multinationals keen on yet more expansion. According to Dhever Nayani, the company's representative in India, De Ster organised a presentation of its plastic food containers in Delhi for potential clients such as fast-food restaurants, hospitals and the railways ministry on December 3, 1998. Sharma and Malik, who attended the presentation, were impressed by what they saw, and asked De Ster to provide them with details of an airline-style catering system tailor-made for trains.

The mooted make-over, outlined in four De Ster pamphlets called 'Serving the Image of Indian Railways', is certainly extreme. In order to bring railway catering up to the international standard offered by most airlines, De Ster refuse to entertain anything less than a comprehensive re-equipment of each of India's train pantry cars, platform food vendors and station restaurants with their state-of-the-art crystalline pet crockery and cutlery.

If De Ster's package is adopted, the train thali will become 100 per cent disposable. Informal Indian recycling units do not have the technology to recycle pet , which can resist temperatures between -40 c to +220 c .

Echoing Yogendra Sharma's sentiments, Nayani explains away the problem by insisting that De Ster provide compactors to their customers which 'hygenically' reduce the bulk of the throwaway plastic. But compactors do not separate the various forms of plastic waste, thus making it impossible for De Ster's ldpe spoons and cups to be recycled. With 55,000 A-class meals being served on India's trains every day, that's a lot of plastic, and a lot of landfill space.


Supplying every outlet with De Ster's 'hygenic' plastic packaging will, Malik confesses, be 'a little costly'. But according to Nayani, railway catering will only start to run at a profit when service of an 'international' standard is provided to the daily 3 million A-class passengers.

Malik believes that De Ster prices will be absorbed by profits made from centralising catering arrangements under a few key companies. He explained that with De Ster's 'global-style' outlook, the Railway's catering service will at last operate as a viable commercial business rather than a sloppily run 'socialist' collaboration of the national 'unskilled and unregulated' chai-wallahs. The contracted companies will be encouraged to become stakeholders in the nascent Indian Railway Catering and Tourism Corporation Limited.

And by building up a series of long-term contracts, Malik hopes to stop the fragmentation of profits which currently takes place at the regional level. Although there are 4,000 licences available for the sale of tea and eatables, the railways are unable to prevent unauthorised vendors from operating.

One solution is the vending machine. First introduced to the railways by Coca Cola, these machines are popular because the profits can be precisely billed by the number of disposable cups used-unlike stalls with reusable glasses. Over the past five years, the ministry has accordingly encouraged big multinational companies such as Nestle and Brooke Bond to install tea and coffee vending machines at the larger stations.

Malik hopes that competition from branded outlets will drive out the 'bad' sellers. In the future, regional station managers will no longer be asked to sub-contract to local dealers. Tea vendors will be organised into franchised outlets and made to sell branded tea. They will have to use De Ster's 'food grade plastic' or polycoated paper cups.

And the outcome for India's environment? Today, those 'dirty, bulky, non-biodegradeable' kulhars are still being used for curd, which sets better in semi-permeable containers. If De Ster get their way, even the curd kulhar will disappear - and a mountain of neatly compressed pet plastic will be the price India has paid for going 'global'.